Sell-offs could be down to machines that control 80% of US stocks, fund manager says

Many believe that the different sell-off episodes seen throughout 2018 were caused by these machines, as they act on immediate data releases, without taking the time to digest them as humans would.

“Eighty percent of daily volume in the U.S. is done by machines, so what you get is a lack of focus on earnings, a lack of focus on outlooks and you just get short-term movements based on very specific data that is released every day and that creates noise,” Guy De Blonay, fund manager at Jupiter Asset Management, told CNBC’s “Squawk Box Europe.”

there is a large misunderstanding about algorithmic trading, especially by people writing "Eighty percent of daily volume in the U.S. is done by machines".

As soon as you write this, you consider optimal execution, that is done by algorithms, in algo trading. It is true and my personal viewpoint is that it is part of algo trading, of course. Nevertheless optimal execution is made of algorithms executing human orders: it is asset managers (like the fund manager cited by your source) who, when they have large buy or sell order to execute, give them to algos to be able to chase all the available liquidity at the cheapest possible cost (to somehow compensate the fragmentation of markets).

=> Behind every execution algo, you have one human instruction, hence linking "Eighty percent of daily volume in the U.S. is done by machines" with "without taking the time to digest them as humans would" is a nonsense.

You have nevertheless algos taking decisions, for instance 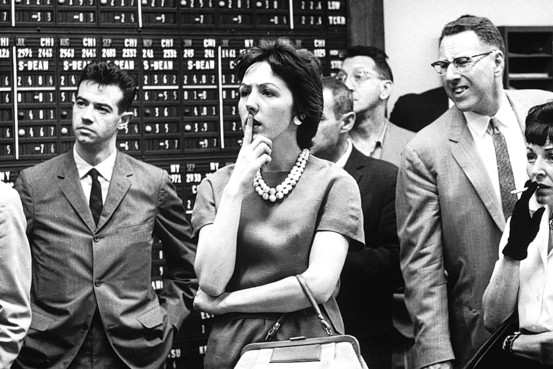 Humans are most often the main source of panic and irrational decisions. Even the Flash Crash (May 2010), for which machines have been blamed, had an exact human equivalent in 1962 (see the picture).

Firstly, there is no possibility for a human to digest data used in algorithic trading. By definition, the algo trading is done by computer software (algorithms), there is no room for human intervention during the algorithm run. Moreover, algo trading transaction are done in microseconds or even fraction of microseconds. Obviously, nobody can react so quickly.

Concerning causes for sell offs, algo trading is not perfect. Sometimes algorithm over-react or under-react, especially in case of a situation they encounter for first time. However, they can be improved by humans. Only here is a room for humans to digest market data and based on a analysis of them to improve the trading algorithm.

This is done in practice. So there are actually two sets of data. First one digested by the algorithm during their run. Second one digested by humans in effort to improved the algorithm. However, no improvement is absolutely perfect, hence algo trading can show some unexpected and strange behavior.

Not the answer you're looking for? Browse other questions tagged algorithmic-trading or ask your own question.