So I understand that the minimum variance hedge ratio minimizes the second moment of the portfolios. My question is how is it related to the size of the risk capital (which is calculated as the Value at Risk - Expected Value). Is the Risk capital also minimized at the optimal hedge ratio? Since the Value at Risk is not considered in the minimization process this should not be the case correct? Also I was wondering if the U-Shape relationship as it holds for the standard deviation also holds for the risk capital.

Without a risk free investment, the efficient frontier is described by a hyperbola, as you have already suggested.

Given asset covariance matrix $\Sigma$ and the full-investment condition $w_1+\ldots w_N=1$, it can be traced out by optimising

In the plot below, the efficient frontier is plotted in blue. The MVP has been highlighted (by the ugly square).

For the relationship of value at risk and return, we have, by the definition of the VaR, the following optimisation problem

Unfortunately, we cannot simply solve for the optimal weights (under VaR targets) in closed form that quickly; but we can make use of some structure and reuse results from above. First, we note that given a return target (with equality), $w^*\mu=m$, we have the target function:

$$ \min_w z_{\alpha}\sqrt{w^T\Sigma w}-m $$
with $m$ predefined. This minimisation is the same as $\min_w w^T\Sigma w$, and hence there is a relationship between the Efficient-Frontier-Solution and the minimum-VaR-problem. This allows us to reuse the efficient frontier weights (as they are optimal given a target return $m$) and plug them directly into the VaR formula. Et voilà!

I have done so on the graph for the VaR at two levels ,90% and 99%. The VaR is on the x-axis, as is the portfolio standard deviation. Hence, on the graph, we have three lines: The efficient frontier ("middle") and a 90% VaR (yellow) as well as a 99% VaR (grey). Generally, the u-shape is somewhat still there, but does not directly relate to the efficient frontier.

Note that you could reuse our points on the efficient frontier above (MPV, M) and solve for the relationship between your target return $m$ and $\sigma$, or between the target return $m$, and VaR. 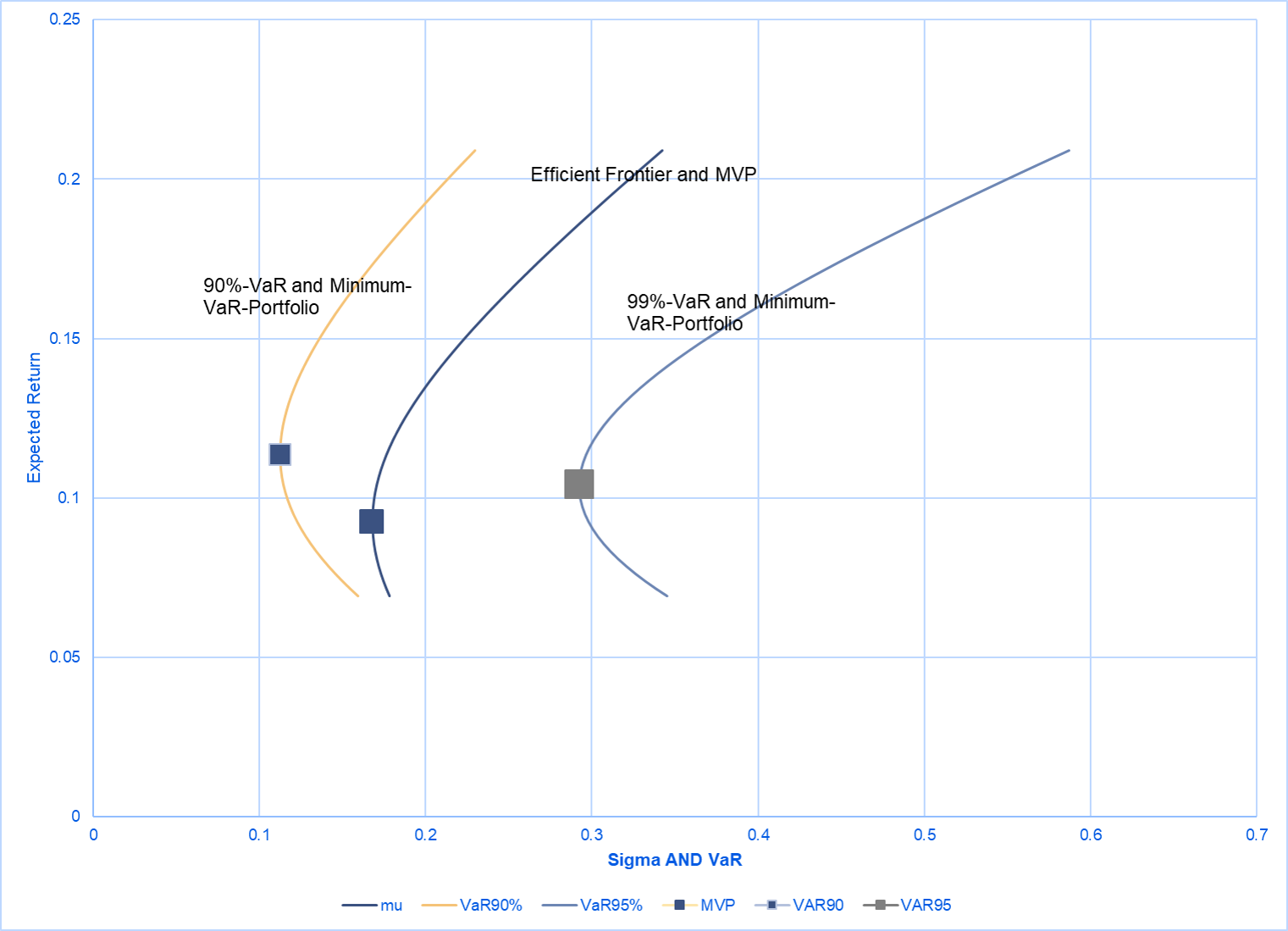