I've been going back and forth with how I should work to find an event effect. would be so grateful for some clarification.

I have daily time series of exchange rates for different countries ( 1 for each country). the period is from jan1, 2018 to dec 31, 2019. I want to know if a certain event that had multiple announcements during this period had an effect on each of the countries. ( I am taking the news that happened during this period 65 in total) and I want to analyse if the event had an effect on each country's exchange rate. this is the market model and my variables would be ER= (dependent)exchange rate, D= dummy, SP= stock market return

my question is, should i have 1 dummy variable for the whole regression with all 1 when a news happen and zeros when it did not and analyse that, as in my data frame would look like 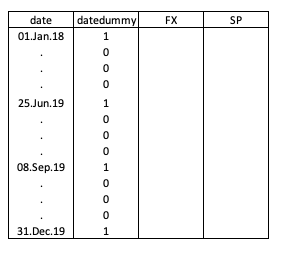 I should then just run an OLS regression of the market model and the dummy=1 would tell me the effect of the event on the FX.

or should I have had to reduce the time window, to, for example, 6 months and analysed each news announcement separately, of course now focusing on less news announcement ( 1 every 6 months), and adding a dummy=1 to days around the event date (-1,+1). so in a 6months daily observations, i would only have 3 dummys=1 everything else would be zero for example: 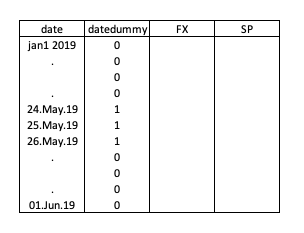 or am i completely wrong with my both approaches?

thank you so much!

Browse other questions tagged time-series regression event-study dummy or ask your own question.

2
Regression of TAQ half-hourly stock volume data against news volume
1
How to model the effect of earnings surprises on long-term returns?
3
Interpretation of t-test in event study with dummy regression
0
Comparing two regressions that differ by a few data points
0
Transforming non-normally distributed interest rates for OLS regression
1
What estimation method is best to conduct event study on unconventional monetary policy
1
How to do an event study for multiple companies with different event dates?