Why is OLS based spread not reflective of actual difference?

I'm trying to define and track the spread between two time series (data available here), for the purpose of learning pair trading basics. 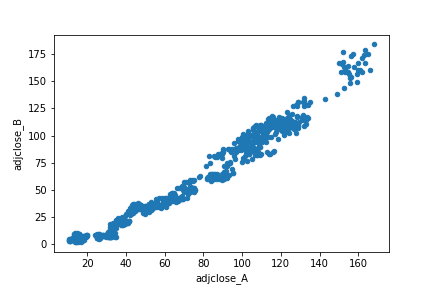 Most posts I've read recommend computing the spread by regressing one time series on the other (for an initial 'train' time window) and then extracting the coefficient and using it to subtract between the two (after multiplying one of them by it).

When I do that the results of the OLS are rsquared=0.88 coeff=2.554344 (using python's statsmodels.api.OLS) but the spread on the time period that's outside of the one the OLS was computed on drifts apart without converging back. On the other hand when I subtract the two time series (beyond the initial period used to compute the OLS) the difference seems to be bounded narrowly. See following plot (Blue line is the OLS spread, Orange line is simple subtraction) 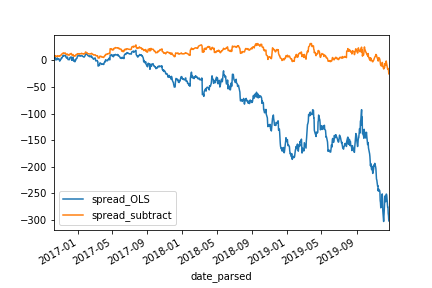 My question is - given that the simple subtraction yields a pretty consistent spread (in and out of sample), why isn't the in-sample regression able to extrapolate well on out of sample data?

If my understanding is correct, then you are asking why in-sample coefficient is not working for out-of-sample data.

Not the answer you're looking for? Browse other questions tagged spread cointegration pairs-trading or ask your own question.

3
ADF test in R yielding perfect cointegration. How is this possible?
1
Close or Adjusted Prices when Backtesting
3
Why is G spread bigger than Z spread theoretically?
2
FOREX: why does SPREAD peak at 22:00 gmt
1
Why the spread is calculated on raw prices instead on the price changes?
3
Why there is no Bid Ask Spread in Futures Markets?