Higher moments of a straddle

Following the logic of Ben-Meir and Schiff (2012) and this question the first, second, third and fourth raw moments of a put are: 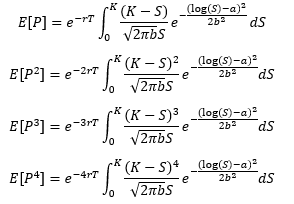 Similarity, for a call it is as follows: 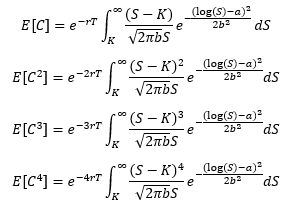 As a result the expected final value is equal to:

This can also be written as:

Which can be simplified to:

Following this logic for the other moments I get:

According to the theory about cumulants if two variables are independent, the n-th-order cumulant of their sum is equal to the sum of their n-th-order cumulants. Inspecting the final raw moments of the straddle it looks like this applies. However, a call and a put are not independent. When the value of a call increases/decreases, the value of a put decreases/increases, so the two option types are negatively correlated. This "fact" and the final results make me feel like I used the wrong assumptions.

Question: Are the the defined raw moments for a straddle correct or am I missing something?

An easy way to check if you've made a mistake during a longish calculation like your derivation of the skew for a straddle is to numerically evaluate the original integral. It would be a one-liner in Mathematica.

Not the answer you're looking for? Browse other questions tagged options option-pricing black-scholes moments or ask your own question.

3
Variance of a straddle (Black Scholes)

7
Call vs. Put Option
1
Put-on-call option confusion
7
"a straddle will be equal to two calls delta neutral or two puts delta neutral"?
1
Paradox in option expiry as volatility goes to infinity
0
ATMF FX straddle delta
0
Why would a lower stock price leads to higher value of a call option?
0
Is there Cornish-Fisher volatility, given that there is Cornish-Fisher Value-at-Risk?