how to calculate vega in stochastic vol?

since vega is defined as option value changes regarding the implied vol parallel shift, how is vega defined or calculated in stochastic vol models since implied vol is not an input there? thank you.

Although pure stochastic volatility models can only match a few vanilla prices, a local volatility component is usually included nowadays. This allows the calibration to hit the whole volatility surface, and so a full term structure of vega can be computed this way.

This is an interesting question. Peter A is correct that SV is typically combined with LV these days to get the so called SLV (stochastic local vol model).

There is no obvious definition for Greeks here as there are no closed form solutions. Depending on the implementation, it will likely be based on a finite-difference solver of the PDE or Monte Carlo (MC) simulation of the SDE. However, calibration in these models frequently involve several steps.

The logic is always the same, bump and reprice. However, what this actually means becomes less clear the more you think about it. The phrase “while holding all other variables constant” is clear in Black Scholes with the actual mathematical derivative but a lot more subtle in case of complex models.

One usually distinguishes between Model Greeks and Market Greeks. In terms of bump and reprice slang: Market Greeks are classic bump market and reprice methodology (usually requires recalibration but if you have complex calibrations, often only parts like the LV model and some steps in SV are recalibrated), while model Greeks are done via bump model parameters and reprice. If you have MC, you will have to regenerate the paths.

Bump size also matters. If you have recalibration, there will be errors. MC paths will add some more noise. In simple Black Scholes logic, you can bump and reprice in literally almost infinitesimally small steps to get arbitrarily close to the closed form Greeks. In reality, you have the tradeoff between having a bump that is too big and captures second order effects, or to small and is just influenced by noise.

The screenshot below illustrates this with Julia in the Black Scholes world.

Plotting the actual tangent (closed form derivative) against the secant line that you get be connecting the up and down bump shows the following. 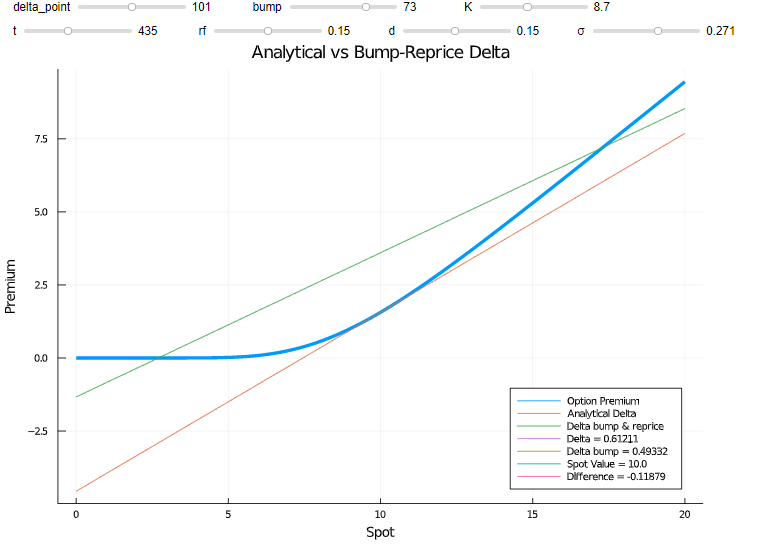 The bump and reprice Greek is defined as $$delta_{bump-reprice} = (BSM(S_+)-BSM(S_-)/(S_+-S_-)$$ It's clear that the non linear payoff of the option results in a sizeable error (how much, will depend on lots of things (moneyness, time to maturity, vol..)

Generally the further away from ATM the less the match. SLV is typically used to model structures with very complex payoffs where more factors play a role and Greeks tend to be less well defined.

Technically, even here can be distinguished if you reflect the change in vol due to the change in delta or not. Click here if you are interested in the FX vol surface construction to see how different deltas relate to different vols. $$delta_{bump-reprice} = (BSM(S_+, \sigma_+)-BSM(S_-, \sigma_-)/(S_+-S_-)$$ Usually one distinguishes between

Sticky delta is FX jargon mainly, but I added sticky moneyness to make this more generally applicable. Generally, stochastic vol moves with spot movement on the grid, hence it takes it into account.

You can get arbitrarily close (I left some gap so that you still see two lines). 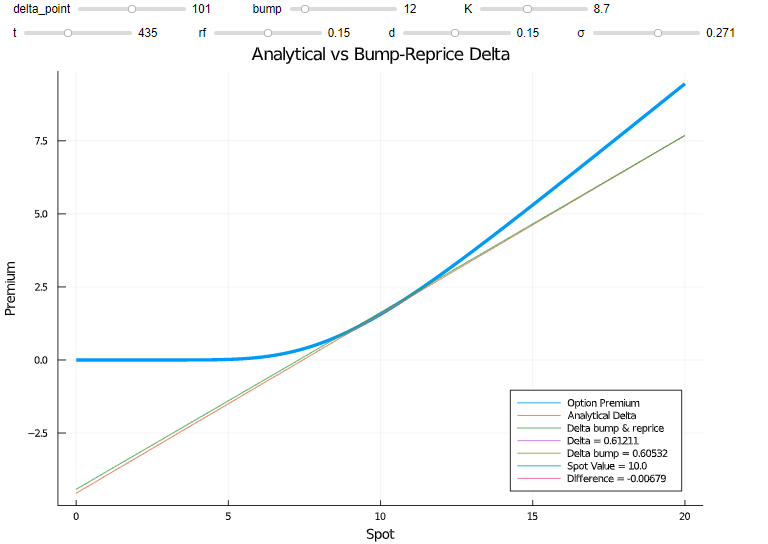 Not the answer you're looking for? Browse other questions tagged stochastic-volatility vega or ask your own question.

27
Local Volatility vs. Stochastic Volatility
10
Differences between main classes of interest pricing derivatives models
4
What is vega, really?
3
Pricing of autocallable structured product
3
Vega in a "constant volatility" Black-Scholes world?
1
FX Options price vs implied vol
-2
Is it a problem that there are so few stocks in the generalized Black Scholes market?
1
Vega of derivative when volatility is stochastic?
0
Valuing Conditional "All Or Nothing" Multi Asset Options
0
Impact of correlation on greeks of a multi-underlying autocallable product
See more linked questions

3
Black Scholes - how to calculate delta with a vol skew
3
A Difference between Local Vol and Stochastic Vol Models
2
Vega hedging with implied volatility smile
3
Vega in a "constant volatility" Black-Scholes world?
1
Calculating option vega for vanilla call seems to be factor of 100 out
1
stochastic vol modelling not enough for smile
8
Vega of exotic options
4
How can I calculate bucket vega using dupire local volatility surface?