How is it that price to book of a bank can fluctuate so wildly?

I'm still trying to wrap my head around the fact that in 2017, the price to books for European banks fluctuated wildly ranging from well above 2 to well below 0.5.

Of course, a British bank doing well would trade way higher than a corrupt Greek bank. But that's an extreme example.

Can someone provide a more realistic example of how a bank with the same assets could trade for 0.2 P2B or 1.5x P2B and why?

You mean aside from the fact that stock price can fluctuate wildly?

There's no 'why', per se. P/B (nor P/E, P/S, P/CF or any valuation metric) isn't a panacea for identifying undervalued companies. It's a proxy of sorts.

1 is obviously a kind of floor, but imperfect (where break-up value = current market price), though it's at times eclipsed. During periods of distress, it's not uncommon for P/B to move lower (sometimes a lot if there are serious issues) still.

P/B is a ratio so it has a numerator and a denominator. P is easy to look up, it is the market capitalization. The problem is that B is the one that's hard to ascertain. Even if you believe the auditors, you should probably make adjustments, for example, the net cash-on-hand. To make things worse, B is in the denominator so potentially, small changes in the value of B might greatly affect the result.

Finally, there is a good possibility to be fooled thinking that high P/B signifies a solid investment when in fact, mathematically, it just means you are paying a lot of money (P) for not a lot of value (B).

These factors would be enough to explain the wild variation in P/B ratios, but on top of that there is the question of leverage. Two banks, both with book value B=50B, one with assets of 200B and another with assets of 1T will tend to trade at vastly different P/B valuation. The first, probably at P/B > 1 and the second at P/B << 1.

Simply, the P/B ratio is the ratio of what the market assumes for the value of the bank were it wound down vs. the value it has a on its own books. Don't forget, also, that a banks has huge leverage: you may think of it's value as being driven by the small amount by which the value of the assets differs from the value of its liabilities and shareholder's equity.

So, for example, you may have a bank with 1T of assets (loans, CDOs, etc.), and liabilities of (notionally) 900B (account deposits, CDs, etc). This means the bank has a net value of 100B.

In 2008 the great question was: what are this bank's assets and liabilities worth? because they may be putting on a brave face trying to get people to hold to the 1T of assets and 900B of liabilities. If they believe, however, that the assets are overstated by 2.5% and the liabilities were underestimated by 2.5%, then the value of the bank would, in theory, fall in half due to bank leverage.

All banking is hurt by the fact it is a highly leveraged entity. Actually, the leverage ratio is not much smaller than many hedge funds. Why? Those banks enter into contracts with those very funds, and if there is a small revaluation in either side of the balance sheet, huge differences in market value can arise. Which means the banks pull in their horns, and the hedge funds need to do so as well - often making it impossible to operate as they did in 2007.

Nothing about European banks has been any kind of "normal" for well over a decade now; but <0.5 and >2, let alone both in quick succession, still represents a "hardcore" variety of financial pornography (such sadly are EU banks). Normally you could blame pretty much anything in this sector on Deutsche Bank (DBK), the financial slo-mo train-wreck that just keeps on giving; but 2017 was actually one of the calm periods here (DBK only down 25% that year).

Basic fundamentals - banks are levered. Call it 100 assets; 90 deposits/debt and 10 equity capital. Net Interest Margins are 1%. In broad strokes, plus or minus loose change. So if 1% of the assets become doubtful (or more doubtful than the usual provisions for expected usual loan losses), the hit from provisioning will be ~100% of profits, or ~10% to book value.

Which is a two-way street. If things don't turn out as bad as feared, writing back provisions can boost EPS and book - without any actual change in the bank's profitability. This is a very normal process, into early cyclical recoveries. I don't recall the exact timings of the last round of NPL write-ups but from memory, the US saw this in 2012-3; and Europe in 2015-6 (obviously delayed post-GFC by the Eurocrisis).

Making the simple point - "book" might be a balance sheet item; but for banks, it's hugely levered to swings in loan deliquency.

But your real problem here isn't the fact that book is thus quite a flexible concept (for banks). It's the valuation swings. Book might wang around; but bank stock prices normally wang around in the same direction for the same reasons that book moves. Earnings collapse -> book declines & stock price down -> much less of a change in PBV ratios (or vice versa). The problem here is the valuation mismatches (more than the volatility of stock prices, earnings or book). Hence the caveat about data quality here. 20% even 50% swings no problem (for EU banks!!!)... but 400% (ie 0.5x to 2.0x) smells a little "off". 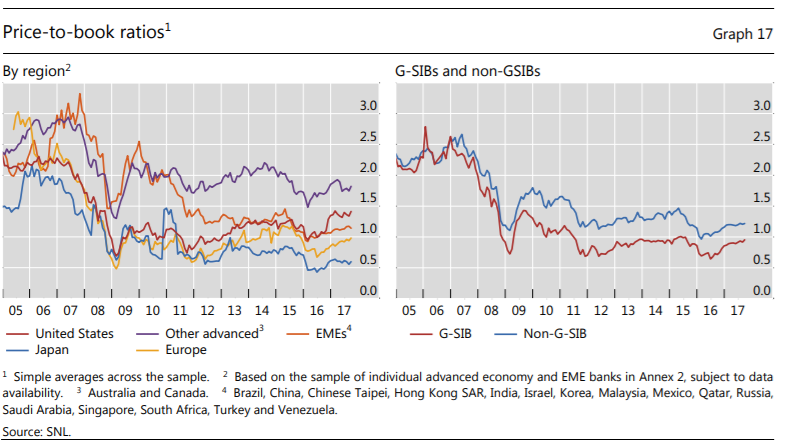 This version of this captures some 2017 re-rating (before Italy blew it in 2018!!!)... but nothing like the scale/volatility suggested.

The only theoretical way I could see that kind of thing happening would be quite convoluted, playing to a mismatch of capital raising. Imagine a hypothetical bank with 100 assets and 10 equity. Fair value is 1.0 PBV, unchanged by the capital raising (RoE down = bad, balance sheet stronger = good). Their friendly neighbourhood regulator phones them up and tells them to raise 5 new capital; but their friendly investment bank says they'll only underwrite this issuance, by offering the shares at a 50% discount. So you have a bank worth 10 becoming a bank worth 15; but with double the share-count. The market smells a rat; and knows this is coming, so it values the bank at 7.5 today (half the shares exist today for half ultimate fair value). Against a pre-issuance book of 10, that's a PBV of 0.75. When the shares are issued, you have 15 equity worth 15 equals 1.00 PBV overnight. Et voila, a timing mismatch.

Except I don't recall any such stories in Europe in 2017 ;-( Suspect the data source has a time-series "funny" in it...

Not the answer you're looking for? Browse other questions tagged market-capitalization private-equity or ask your own question.

1
How can I determine U.S. market capitalization percent using WFE data?
5
How to find an initial equilibrium benchmark portfolio that includes currencies for Black-Litterman model
1
Is there an API that can return the current market cap of a publicly-traded company?