I'm trying to understand several credit risk graphs seen in the FRM curriculum. The way the book goes it's hard to see how it ties together, so I'd like to try and do that now. The pictures are taken from the official GARP book. I'll go in the order the graphs appeared in the book, and thus the order I studied them. My confusion increases near the end... 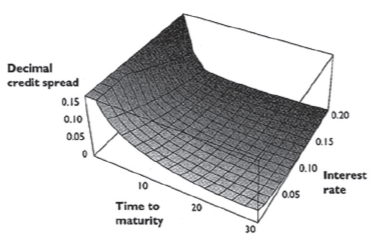 Call this Figure A. Apparently with high-risk credit a longer maturity is actually good because it gives the firm more time to raise its value and have enough money to pay off the debt. Nothing too confusing there. 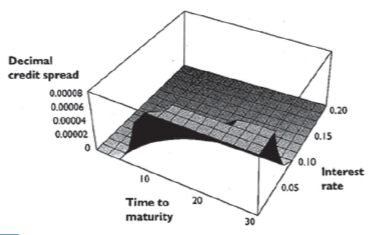 Call this Figure B. This firm is safer than the one in Figure A. This is the most intuitive of all the graphs, where I take Credit Spread to mean, colloquially, risk and therefore longer maturity means more risk due to uncertainty. Risk is high when rates are high because firm grow will be minimal, so when the debt is due firm value may be insufficient to pay the debt. 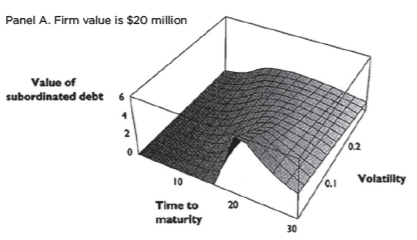 Call this Figure C. Like the above pair, Figure C's company is more levered than the one in Figure D.

Specifically, these were subordinated debt issues (wasn't specified if A & B were senior, but I assume so). Again longer maturity gives the firm time to make money. I suppose there is a hump because after a certain time the firm is just pointless; there is probably some "optimal" time for "redemption" of a company. Here, the high-risk subordinated debt behaves like equity, which in turn behaves like a call option because of the Merton model, which benefits from volatility.

Confusion 1: Why is there a peak in value at a certain maturity here, whereas in Figure A it was a steady decline in risk for longer horizons? 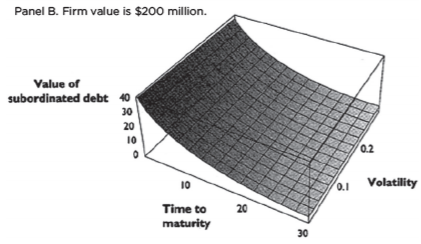 Call this Figure D. Time to maturity is intuitive. They didn't specify what effects volatility has, and the graph makes it seem like there is no effect.

The follow pair of graphs are again of subordinated debt. 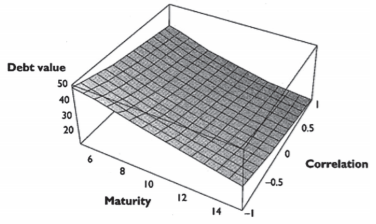 Call this Figure E. Maturity having the intuitive effect now. The correlation is between interest rates and firm value. I ssuppose negative correlation is good because then when rates drop, firm value increases (due to correlation), and bond prices go up (discounting basics). Your investment grows and the company has more capacity to pay the debt. 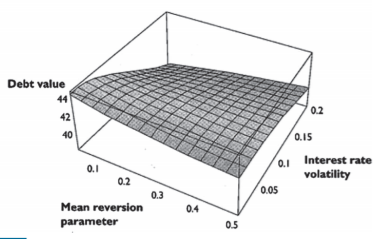 Call this Figure F. This example was draw assuming current rates are below the long run mean. Therefore a high mean reversion thought of as "increasing rates", so the higher the reversion, the lower the debt value. Hard to see by the graph but sure. Interest rate volatility I just used the intuition of fixed rate = safe, floating rate = risky. Therefore higher volatility = higher risk = lower debt value.

Browse other questions tagged fixed-income interest-rates credit-risk or ask your own question.

10
How to build the short end of a zero coupon curve for non-core Eurozone countries?
6
How to value a floor when a loan is callable?
0
Interest Rate and Price of Assets
0
How to determine the risk free rate for the calculation of Beta
4
Optimal investment mix of equity and debt in a single company, HY vs IG
3
How can a deep discount bond with a longer time to maturity have a LOWER duration than an otherwise identical bond with a shorter time to maturity?