Why does implied volatility decrease without a change in stock price?

I was lookin at some stocks and find that implied volatility changes without the stock price moving too much. What are the causes?

Implied Volatility (IV) is determined from the price of options, which you can think of as an insurance on the underlying stocks. So, if investors think there is a large change of big moves, they will pay more to buy and charge more to sell options, so price and IV go up.

There are many factors that influence IV. Some of the major ones are:

It's well observed in many markets that realized volatility and the underlying price are inversely correlated - ie. stocks move around a lot more intraday during a crash than during a recovery. There is a strong link between realized vol and IV, so investors will charge more for options and IV will increase when spot is falling, and visa versa.

As an example, here is the VIX Index from Google for the last 6 months (it's a measure of the average IV levels for S&P 500 index options), see that it spiked up when stocks crashed in March 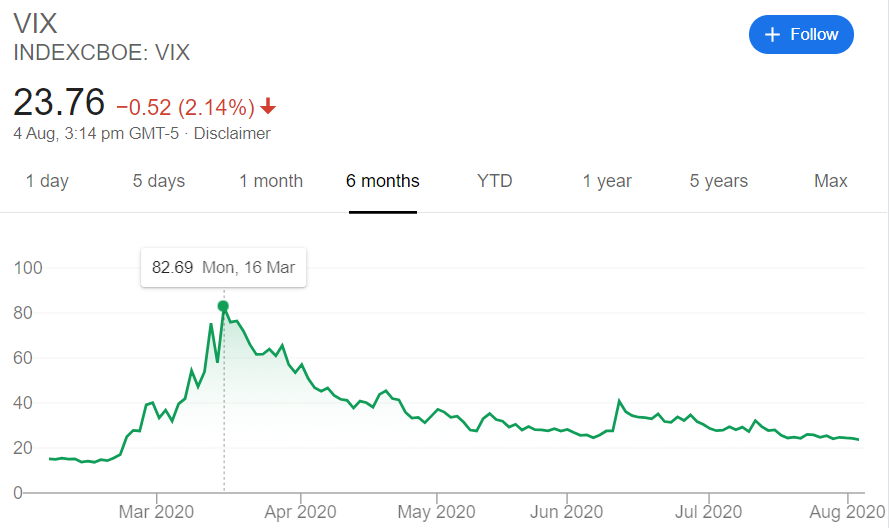 This is usually the main driver of equity IVs, but there are several other effects that DON'T depend on stock moves, eg.

Here is an example vol surface for equity options, with IV plotted as the distance above the strike-tenor plane 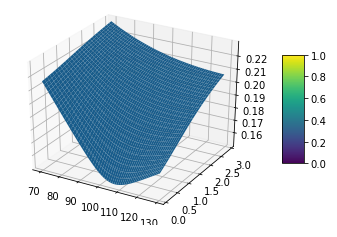 Now if I take a cut-through at the at-the-money strike, here is what the vol curve looks like: 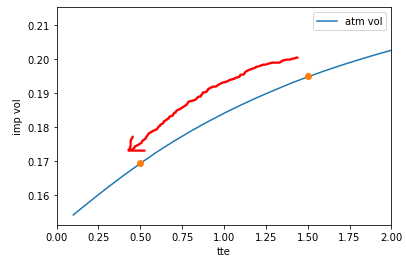 This tells us that the market is charging IV of 19.5% for an 18-month option, but 17% for a 6m option. This means that if we buy an option expiring in 18-months, and hold it for a year, and nothing else changes, the market will now only pay 17% IV for this option.

So we can see that each trading day that nothing changes, the IV of our option will fall by about ${\frac {19.5\% - 17\%} {252}}$ which is about 1 basis point of roll down a day (the effect is strongest where the curve is steepest, usually close to expiry)

IV can be thought of as the market expectation of realized vol over the lifetime of the option you purchase (eg. see this paper)

By definition, if spot has not moved, rolling realized volatility is falling. It seems reasonable to expect that barring other things (like expectations of an earning announcement), investors will expect less future volatility from a stock whose historic volatility is falling, and will respond to stationary prices by reducing the IV they charge

Here is the futures curve for VIX futures as it appears in early August 2020: 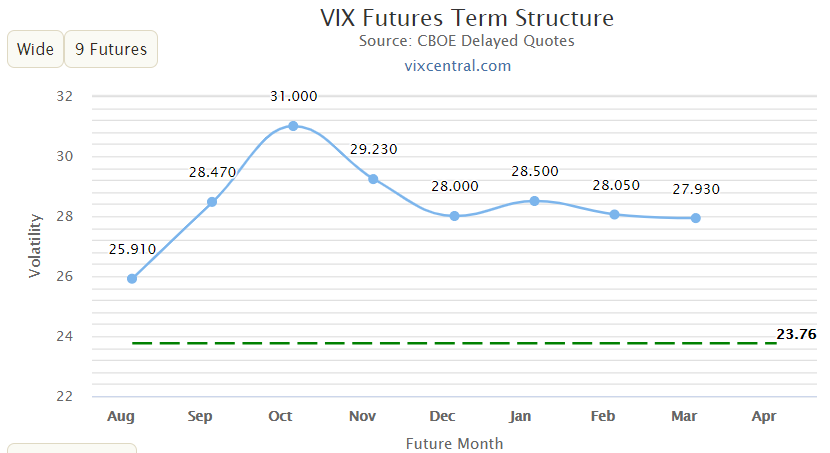 We can see a clear bump around October, where the market is expecting increased volatility due to the US Presidential Election in early November (the VIX quotes cover the volatility for the month after the futures expiry, so the October future covers the end of October and early November).

This tells us that the market expects a spike in volatility during that period, and once we're through the spike we expect to see IV come down significantly, almost regardless of the moves that the spot makes during that time, as there is less 'macro uncertainty' after that.

Implied volatility is calculated from the price of the option contract, not the stock price. Thus, it is influenced by the "supply & demand" of the options.

There are scenarios where the stock price remains flat while the IV of options change, examples include approaching expiration of the option, earnings reports, etc.

Not the answer you're looking for? Browse other questions tagged options option-pricing implied-volatility or ask your own question.