I'm reading about the Hull-White model, I understand the math behind it and logic but what I am struggling to understand is how it's actually used in practice ? How can we combine it with technics like Monte-Carlo for IRD options pricing ? Can someone simplify this from a practitioner point of view with some example please ? thank you

The Hull-White model is an no-arbitrage short rate model. It is used to price interest rate derivatives such as caps and floors. It generalises the seminal equilibrium model from Vasicek (1977).

The model postulates that $$\mathrm{d}r_t=\kappa_t(\theta_t-r_t)\mathrm{d}t+\sigma_t \mathrm{d}W_t.$$ Two of the key model features are that

The model belongs to the class of affine term-structure models allowing you to write the price of a zero-coupon bond as $P(t,T)=\exp\left(A(t,T)+r_tB(t,T)\right)$. The Cox-Ingersoll-Ross (1985) model also belongs to this class.

Because the model assumes a normal distribution, Monte Carlo simulations are also very simple to implement. You can use a simple Euler approximation to simulate different paths: $$r_{t+\Delta t}=r_t+\kappa_t(\theta_t-r_t)\Delta t+\sigma_t \sqrt{\Delta t}Z,$$ where $Z\sim N(0,1)$. 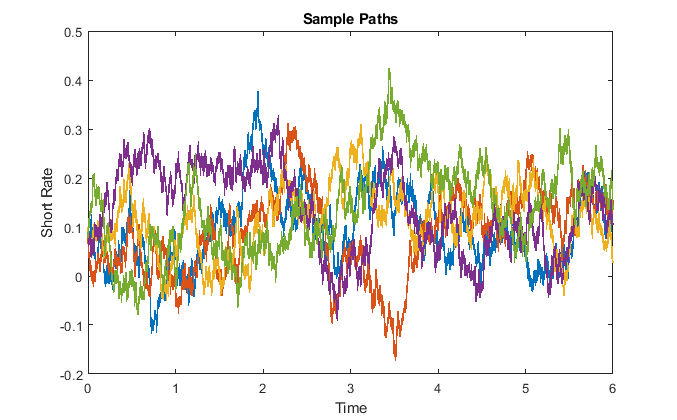 One downside is that the volatility is not state-dependent. You'd expect a high short rate to more volatile than a short rate close to zero. The model assumes a constant (or at least deterministic) instantaneous variance. The CIR model is a better choice in this respect.

Just as a note, let $R(t,T)$ be the spot interest rate. Then, $\mathbb{C}\text{orr}(R(t,T),R(t,S))=1$ for all $T,S$, i.e. a shifting a single bond yield will cause a parallel shift to the entire yield curve. That's not quite true in real life data but an implication of the model.

From the fundamental theorem of asset pricing, we obtain $$P(t,T) = \mathbb{E}^\mathbb{Q}\left[\exp\left(-\int_t^T r_s\mathrm{d}s\right)\bigg|\mathcal{F}_t\right].$$ You can thus price bonds by knowing the short rate. Regarding bond options, you can write down a PDE similar to the Black-Scholes PDE and solve it easily in closed-form: $$P_t+\mu(t,r)P_r+\frac{1}{2}\sigma(t,r)^2P_{rr}-rP=0.$$ Caps and floors are just portfolio of zero-coupon bond options. This way, you can compute the prices of liquid, observable products and use them for calibration (minimise sum of squared relative errors). The result are the risk-neutral parameters for the short rate process.

You can find formulae about the distribution, bond price and bond option price on the wikipedia page. An excellent source on interest rate models is the book from Brigo and Mercurio. This book includes most (all?) relevant formulae.

The unembellished Hull-White model is not used very much in practice, because it is under-parameterized to handle a term structure of risk-free rates, and hence cannot be calibrated in any reasonable way.

As you have probably remarked, in its usual form it starts the short rate $r$ at some single value, and evolves $r$ according to just a couple volatility and drift parameters. This prevents it from fitting to more than three market instruments.

I have occasionally seen straight Hull-White used for pricing embedded bond options, in particular on Bloomberg terminals, but otherwise have not observed a professional employing it since the 1990s.

Now, if you embellish HW with full term structures of forward short rates, into what we call the 1-factor Generalized Vasicek or HJM model, you end up with a near-equivalent relatively parsimonious interest rate model suitable for simultaneously treating multiple interest rate products. (Be careful: if you get as exotic as Bermudan/American-exercise swaptions you must have 2 factors)

Once you calibrate the generalized model to market instruments, you can use it for pricing less liquid stuff. Alternatively, to use it for risk, you would fit it in subjective probability space using a Kalman Filter, as in this paper by Babbs and Nowman. I also refer you to these notes from an MIT class.

The Wikipedia page is not bad for HJM; I'll paraphrase:

Basically we take the term structure of zero-coupon bond prices as $P(t,T)$ and define forward rates $f$ by $P(t,T)=e^{-\int_t^T f(t,s) ds}$, where in practice you assume $f$ is some kind of step or piecewise polynomial function. No-arbitrage arguments end up controlling the drift in $f$ according to the volatility term structure.

If we assume volatility takes the simple form $\sigma(t,T) = \sqrt{(T-t) \bar{\sigma}^2}$ then the evolution equation is then more-or-less the same as Hull-White:

where when we put in all the machinery, that expands to

Not the answer you're looking for? Browse other questions tagged option-pricing interest-rates hullwhite or ask your own question.