I'm trying to understand what we mean by linear and non-linear guaranteed liabilities for pension fund ?

Often this exposures are hedged by Interest rates derivatives swaps and swaptions which I can understand just looking from the payoffs of those derivatives but what I can't still understand how liability can be non linear ? Thanks

Imagine a fund with liabilities for this year of 1. These grew by say 3% per annum in perpetuity (call this "G"). The same discount rate applies to all liabilities, say 5% (call this "K").

So the Net Present Value of the future liabilities will be (1+K)/(K-G).

While the derivative of the NPV with respect to either K or G becomes a reciprocal quadratic of the spread between them... which is an explosive function, not a constant!

Please pay no heed to my implicit assumption about the pensioners being immortal... Above was a clearly extreme and stylised scenario; but hopefully reveals the underlying essence of the problem.

Which isn't the rates hedge the fund has on for today's future liabilities; but the mismatch that develops between this hedge and the liabilities once any of the assumptions used to calculate the latter get tweaked a little in any direction. 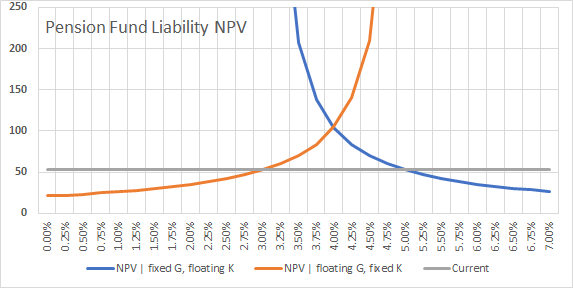 Not the answer you're looking for? Browse other questions tagged interest-rates swaps or ask your own question.