It seems like put options on Index/ETFs generally have 50% more volume than call options, in terms of notionals. We don't see the same put/call volume ratios in single stocks.

Why is that the case?

I have validated by spot checking the put/call volume ratios on Bloomberg terminal for a few major indexes and major tickers. This is indeed true. But I don't have an explanation 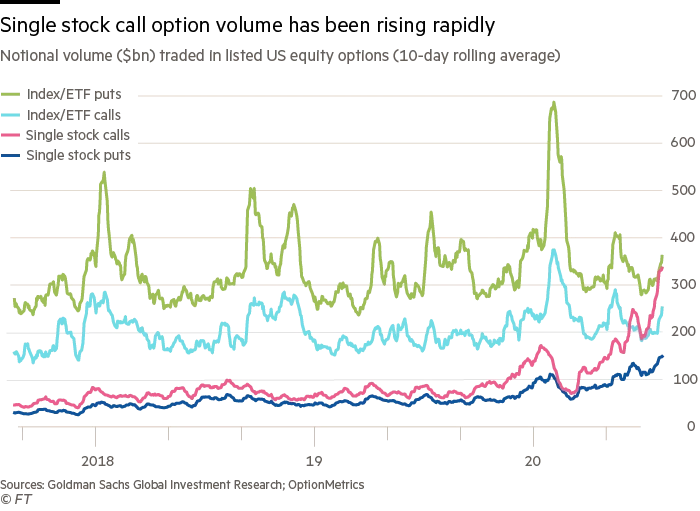 Investors buy (and hold) more puts and pay up more for them for a few reasons. First, people fear downside more than they like upside as shown by Kahneman and Tversky (1979, 1992). Second, people may not be able to recover easily (or at all) from downside in the macroeconomy. In classical finance terms, if we think crises are different from times of stable growth, put options allow you to trade a state variable on macroeconomic distress (which the ICAPM says should be priced since it is valuable).

This is the whole point of the Bondarenko (2014) expensive put options literature. See Figure 1 in the Bondarenko paper to see that puts having larger trading volume (and open interest) than calls is not new.

As for why this does not hold for single stock options: That is probably because an individual stock is an even noisier measure of the prospects for the macroeconomy. In fact, we see slightly more calls being traded. It could also arise from portfolio managers selling covered calls as an income-generating method which also conditionally rebalances their portfolios.

It can mostly be attributed to portfolio insurance. Many investors (even mutual funds) are allowed to buy puts to hedge their downside risk in cash positions. I think the fact that mutual funds would buy puts increases the volume of puts vs calls with all else being equal. Since mutual funds are mostly positively correlated to the market, it makes sense to buy insurance on the whole market instead of individual stocks.

Conventional wisdom is that clients buy puts on an index (e.g. SPX) to hedge their overall portfolio but buy calls on their single names and this explains differing p/c ratios for indices vs. single stocks.

Not the answer you're looking for? Browse other questions tagged options index etf liquidity volume or ask your own question.

4
Why in general is the variance of volume changes higher than variance of price changes?
7
Call vs. Put Option
0
Share Repurchase and Bid ask Spread data
2
What should be the sign of greek letter $\rho$?
3
Why not break the volume every day into buy and sell volumes?
0
Why are put and call options worth the same despite that put has no upside whereas call has unlimited upsides?
1
IV on FOP (futures options) being higher than IV on equivalent ETF
0
Why is the forward price of an ETF that holds futures equal to the current price of the ETF?