When pricing with Monte Carlo using market prices, should we use only the first price or all the prices to create the paths?

I have a vector $S=(S_0,S_1,...)$ of monthly oil spot prices and for each of them I have to compute, using Monte Carlo, the price of the forward contract having it as underlying asset. The equation that I have to use to model the prices of the asset is of the form $S_t = S_0f(t)+...+\sigma g(t)\mathcal N(0,1)$ where $\mathcal N(0,1)$ is a random number from the standard normal distribution and $f$ and $g$ are known functions.

Anyway, my main doubt is about the Monte Carlo method. From what I understood the method uses the first spot price, $S_0$, to randomly generate the other prices $\hat S_1, \hat S_2,...$ (notice the $\hat{}$ to distinguish them from data spot prices), which are then used to compute the prices of the contract, but what I don't understand is if the price $S_{t-1}$ appearing in the equation refers to the data spot price or to the $\hat S_{t-1}$ computed using the equation.

I tried to compute the prices in both ways and the two plots are very different, in particular when using $\hat S_2=S_1f(1)+...$ the mean of the paths (blue line) is very close to the data (black line), while when using $\hat S_2=\hat S_1f(1)+...$ the paths are far from the data and the mean path is smooth and approaches an horizontal line as the number of simulation increases.

So which is the correct way of performing the Monte Carlo method? 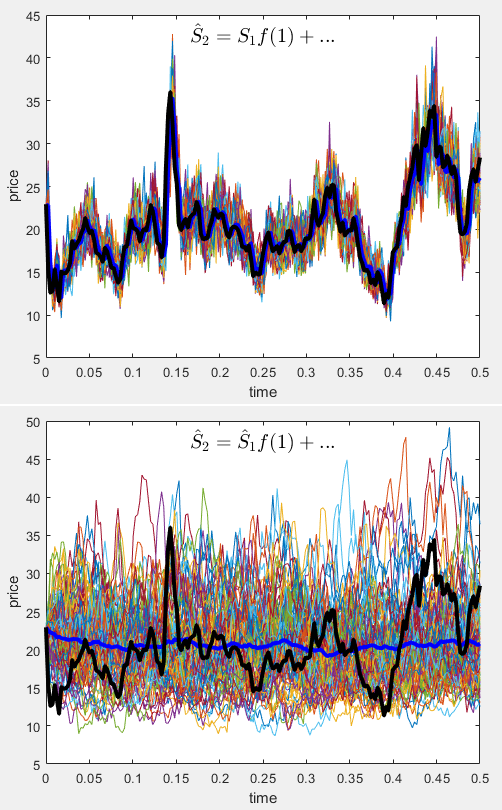 I think you're getting confused because you're attempting to calculate simulated spot prices using actual starting spot prices taken over a number of dates.

Ignore wanting to do the same thing for any number of starting spot prices and just do it for one to start.

Assuming you'd like to simulate price using the process referenced:

Your first simulated data point, $S_1$, uses the starting actual spot price data, $S_0$, and $S_2$ is calculated in a similar manner using the simulated $S_1$, and so on. You can simulate spot trajectory using any of the other starting spot rates in a similar way.

Monte Carlo is commonly first implemented using a native (to whatever language or application you're using) random number generator, but these numbers aren't really random and depend on starting seed. As the commenter above referenced, pseudo-random number generators (eg, Sobol) are often used as a preferable next step.