What are the kind of post trade analysis (EOD analysis) that an options market making desk does? First few things that comes to my mind are slippages and breaking the pnl into various greeks. Any other ideas or experiences?

OMMs run a position that comes from the trades that they are making throughout the day. For risk management and hedging they of course need some kind of pricing and greeks model for this overall portfolio which they calibrate intraday, and use to do PnL-Explains on PnL coming from the overnight moves in the market. Beyond pure inventory management though, some of the analysis I've seen OMMs doing include:

Still thinking of trades in terms greeks, it's much more preferable for an OMM to be able to reduce risk by having two clients trade in opposite directions close together in time, rather than having to go to the market to hedge the risk themselves. Generally delta is cheap to hedge, but other greeks can be harder and more expensive to hedge, so OMMs want to know how long a given amount of each greek will sit on their book, so that they can charge their clients appropriately for taking these risks. Using inventory turnover accounting like LIFO or FIFO, they can build metrics for how long given greeks last on average.

Treating trades individually, OMMs will track the PnL of each trade on multiple time horizons from minutes to days. One of the things they're looking for here is 'toxic flows' - for any market maker, the ideal trade is one that has no predictive power about the future direction of the market, since the OMM can cross these all day long and capture the spread.

However, many client trades are not like this (in the old days people used to talk about an 'insider trader', now they typically use an HFT or a sophisticated quant hedge fund as the example). Bouchaud in "Trades, Quotes and Prices" (pg 17, image at the bottom) gives an example of a market where a trade has a $\phi$ percent change of predicting a jump $J$, and shows that MMs must charge a spread of at least $2 J \phi$ in such a market to be profitable.

Of course, in a real market $\phi$ will be a function of client type, and any OMM who can more accurately measure $\phi$ by client will be able to charge tighter spreads to less informed clients and wider spreads to the more 'toxic' clients, and will win safe market share from other dealers while avoiding the more toxic flows (in my experience, doing this well is really what sets apart the elite prop shop OMMs from old-school IB desks).

A really important measure for any trade that an OMM makes is the 'cover price' - this is the next-best price that was available to the client in the market. Whether this is available to the OMM depends on the product they're trading - some platforms provide it to the winning broker, for large OTC trades salespeople can sometimes find it out from the client directly, but in either case the OMM wants their quoted prices to be the best, but to be as close to the cover price as possible so that they're not bidding too aggressively compared to the competition.

Beyond toxic flows, OMMs will want to understand which clients are more price sensitive (and time sensitive in markets where trades are still done by voice), and in some cases might even do things like tracking client positions to help understand which direction they are likely to be trading when they request two-way prices (to bias thier pricing a little bit in that direction perhaps?!), I've heard many claims from traders that certain OMMs are much better than others at this (and once again, it's usually the prop shops...) 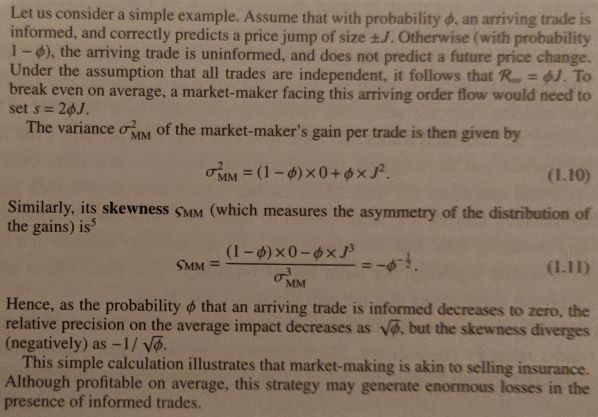 The following does not necessarily apply solely to options market maker (MM) desks but a general MM.

MMs are usually focused on running an on-going portfolio. A minority of MMs will run a daily book (with no outstanding risk at end-day) but generally this is inefficient or impossible and will therefore run a portfolio on an ongoing/indefinite trade basis.

The specific analyses will differ from MM to MM, in terms of the metrics, but you cannot get away from analysing the actual PnL and risk, and making sure all trades have been booked correctly (minimising operational risk).

Not the answer you're looking for? Browse other questions tagged options market-making or ask your own question.

22
Quantitative Math required for Market-making?
1
What are the some good measures of risk for options?
4
Model reference price of Limit order book
2
Portfolio risk analysis in Options & Mixed portfolios
2
Theoretical models for options bid-ask spread?
1
How to manage theta, gamma, vega, and delta risk in options market making simulation
1
What are the mechanisms at play determining option pricing on stocks?