Has anyone ever quantified or understand the impact of distortions to the High/Low of the day based on SEC Rule 611 pass through trades? These are trades that happen outside NBBO (national best bid and offer), however they register they still impact the high/low of the day. The general public wouldn't be able to trade at these prices so it will have an impact on backtested results. I'm not sure how by how much, or how often this happens. Here is a visual example, imagine you had a rule to buy CTAS at 127. However, the NBBO ask price was 12 points higher! 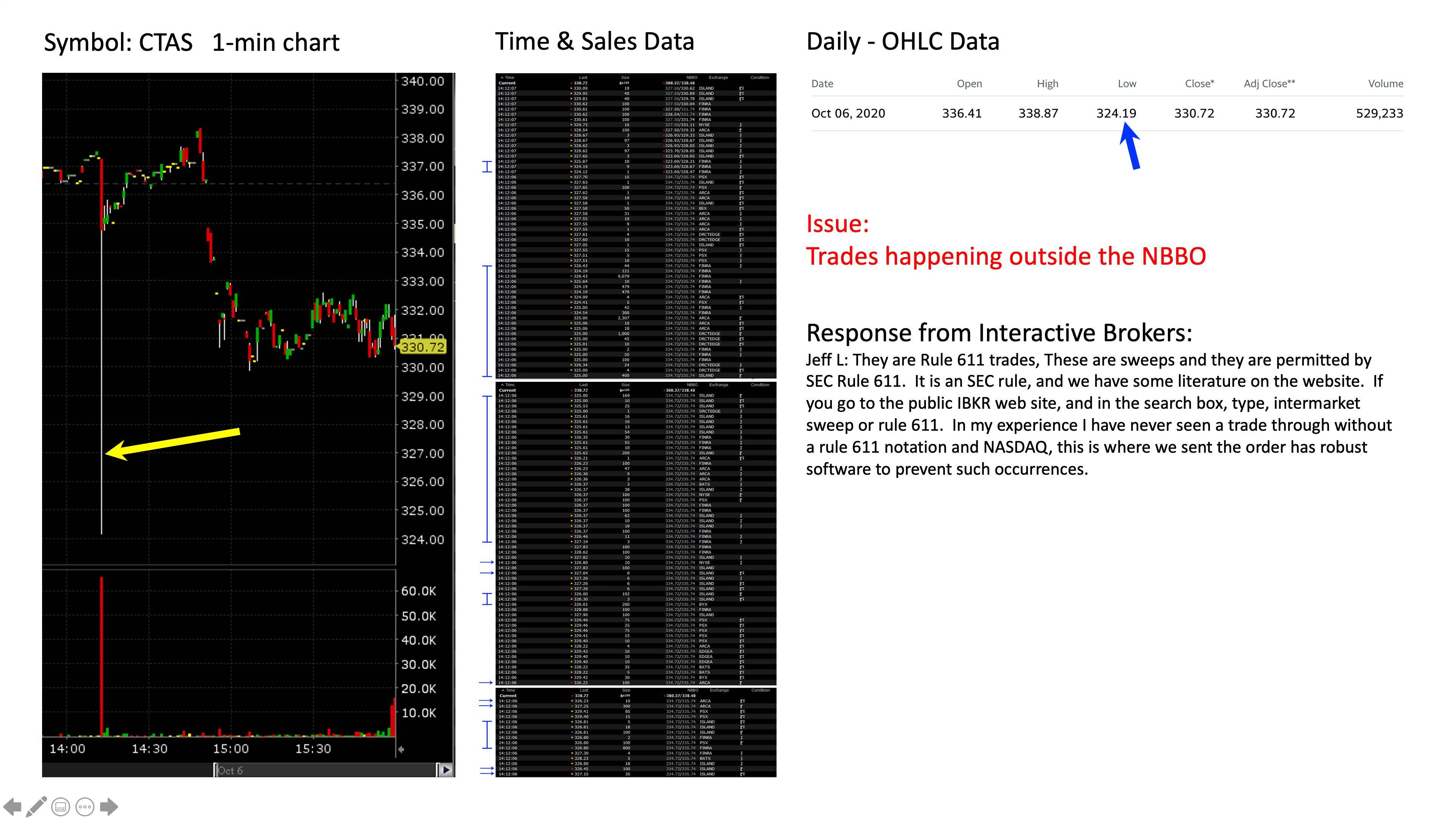 This means that someone really, really, really, wanted to sell this stock. They kept selling and selling and cleaned out the entire book across all markets. This is a real trade and you could have traded against this seller if you had a resting order out there.

You are misunderstanding your broker's explanation. Rule 611 describes the obligation under reg NMS to not bypass better markets when executing. That means that if NASDAQ shows a 100.01 bid and NYSE shows a 99.99 bid you can't decide to sell to NYSE for 99.99 for some reason. However, if you can sell to the 99.99 if you also sell to the 100.01.

The broker is simply saying that someone cleaned through the book and complied with Rule 611 - not leaving better orders untouched while executing against inferior orders.

Pulled the data to look into this and... my goodness, it is a flurry of intermarket sweeps: 552 ISOs in a span of 7-8 seconds. This is inexcusable: There is no way that much volume needed to be crammed into the market in the few seconds between 14:12:05 (when sweeping begins) and 14:12:12 (when sweeping ends). I cannot see any way to argue that this was "best execution." This was terrible execution and would be reason alone to fire a trader on every desk I have sat on. You might even argue failure to supervise because a good smart order router should warn you that doing something like this is not sensible.

What I previously said:

This could happen if somebody was stupid, set flags to indicate they did not want to get routed to the best orders because they wanted to trade on a certain exchange, and got terrible pricing as a result. This could also happen if that person sent a very aggressive IOC order.

However, I doubt that is the case: Most smart order routers would not do this and it would open the door to accusations of manipulation -- since you could not argue that a price so far from the inside market could be justified by rebates or payment-for-flow. While the S&P 500 was down at most 1.6% (open-low), that still would not explain this CTAS print at 3.7% below the open.

The most likely explanation is another reason you will see trades print far outside the spread: if they are average price (VWAP) or prior-reference-price trade prints. (These are often used for block trades.) This is one of the exceptions to order protection, as per Rule 611(b)7. These prints essentially record the aggregation of trades done before that time, across multiple venues, and possibly including off-exchange block trades. Given the large size, I suspect this is what happened. There is no way you could have participated in this trade -- since it was likely arranged over a period of time long before that print.

A good broker would likely send ISOs to try to fill orders sitting out in the market to reduce the price impact; however, given the (sometimes) complications of negotiating these trades, that is often not required (and may not even be practical or possible).

This is most likely an indication of a large principal fill from a broker against a buy-side client. Buy side client wants to trade a large block in one shot ( which he cant do in lit markets ). Broker agrees to take the trade into their book but needs to be compensated for the risk - so he would only do it at a price outside of NBBO. To comply with the NBBO broker first sweeps the protected quotes and then prints the ( much larger ) trade against the client. Market then typically reverts back to where the NBBO was pre block trade. All very common - nothing nefarious or manipulative.

Not the answer you're looking for? Browse other questions tagged trading backtesting historical-data sec or ask your own question.

12
How to account for market movement when some exchanges are closed?
4
How to most optimally perform currency conversions when backtesting on portfolio level?
3
Backtesting with Simulated Historical Data?
1
How to estimate probable seeling pricegiven OHLC data for backtesting?
1
pandas pull 500 stocks through data reader
1
Question on OHLC historical data
3
Detect pattern from OHLC data in Python