The picture below is a P&L chart for a call credit spread that exhibits the pattern I've seen in every single introduction to credit spreads I have looked at. Namely, above the long leg's (green) strike price (in this case \$111), the net profit/loss (black) is a negative constant (-$3.50), below the short leg's (red) strike price (\$100), the net profit/loss is a positive constant (\$7.50), and the absolute value of the former is less than the latter. 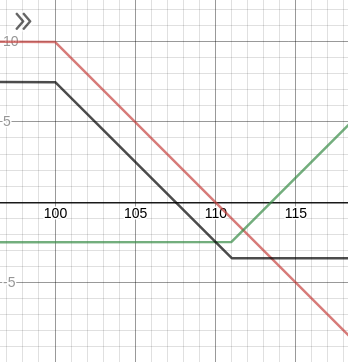 I've never seen, however, a P&L chart like the one below, where the net profit/loss remains positive throughout. 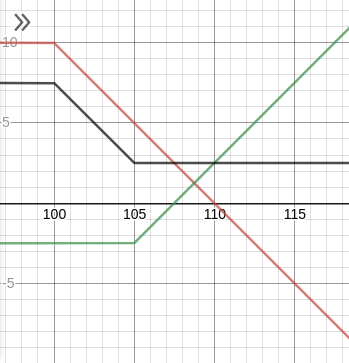 Of the four parameters that went into making these charts, namely the premiums and strike prices for the short and long legs, only the long leg's strike price is different between the two examples. These are \$111 and \$105, for the first and second examples, respectively.

Since these introductions to credit spreads invariably express the opinion that credit spreads are a very useful trading strategy, there has to be a reason for they never showing anything like the "win-win" scenario illustrated by the second example. How come?

Of course, in concocting these two examples, I allowed myself to modify the long leg's strike price without any restriction, other than keeping it above the short leg's strike price. This may be impossible in practice (at least, that is, if I am to keep the other parameters unchanged, as I've done here), but again, if so, I don't understand why this is the case.

(I've cast this question in terms of call credit spreads, but one can concoct a similar "win-win" scenario using put credit spreads. Furthermore, one can also concoct "win-win" strategies using call and put debit spreads. In all cases, it's all a matter of tuning the relative sizes of the spreads between the strike prices and the premiums.)

EDIT: I want to make clear that the two cases above say nothing about any other other factors that may affect the premiums and strike prices of these options. In particular, I make no assertions about how similar these two cases may be with respect to expiration date, volatility, current price of the underlying stock, etc. The only point I am making is that I have never seen examples of a call credit spread like the second one above. I assume this experience is an accurate reflection of what happens in the real world. My question is: what is it that prevents situations like the one illustrated in the second case from occurring.

This question can be expressed more mathematically. Let $P_S$ and $S_S$ be, respectively, the premium and strike price of a call credit spread's short leg, and, similarly, let $P_L$ and $S_L$ be the corresponding parameters for its long leg.

Remember that $P_L$ is negative, while the remaining three parameters are all positive. This means that

Furthermore, since we are dealing with a credit spread, then, by definition,

If one works through the math, what characterizes the second case above is that

Another way of saying exactly the same thing is that the first inequality below always holds in practice (for call credit spreads; the second inequality, as already stated, is the definition of credit spread):

I want to know why this is.

The risk of a credit spread is the difference in strikes less the premium received. In your first graph, the credit is \$7.50 and a strike difference of $11 so the risk is -\$3.50 as noted.

In your second graph, the worst case scenario is a \$2.50 gain which means that the credit must exceed the difference in strikes and that is not possible. It has nothing to do with arbitrage.

Of course, in concocting these two examples, I allowed myself to modify the long leg's strike price without any restriction, other than keeping it above the short leg's strike price. This may be impossible in practice (at least, that is, if I am to keep the other parameters unchanged, as I've done here), but again, if so, I don't understand why this is the case.

Given your strike prices, a more realistic price for the \$100/105 call spread would be a credit of \$4 and therefore the loss area would be negative \$1.00

Should you wish to make the question clearer and easier for readers to understand, list the premiums for the three strike prices that you have offered, the price of the underlying and the expiration.

Not the answer you're looking for? Browse other questions tagged options or ask your own question.

5
Pricing options under restricted domain
12
On the interface between Quant finance and actuarial-science/insurance-math
0
Seagull Spread payoffs
2
Arbitrage opportunity between two call options with strike price \$40, \$30 and cost \$4, \$3 respectively?
1
Show that $Ae^{rt}$ is a solution of the Black-Scholes equation. Why should this be so?
0
Double Call Option