Do the minimum VaR and minimum ES portfolios lie on the mean-variance efficient frontier? 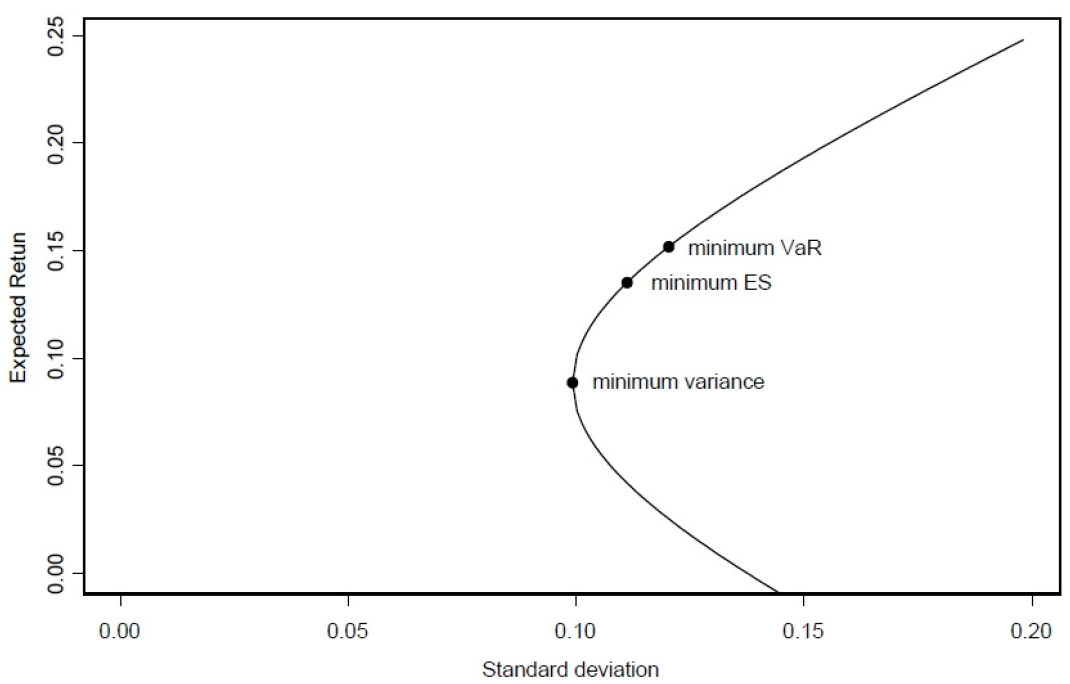 I thought though (and have seen in articles) that there are frontiers unique to the mean-VaR and mean-ES efficient frontiers? Which is right?

When returns follow an elliptical distribution (e.g. the Gaussian distribution), then minimising VaR and ES is equivalent to minimising variance. See https://people.math.ethz.ch/~embrecht/ftp/pitfalls.pdf. Then, the frontiers will be the same.

This is a result of the two fund separation theorem or mutual fund separation theorem. Any (optimal) portfolio choice will take place on the efficient frontier. In a Markowitzian world, the asset universe is fully characterised by first and second (co-)moments. Hence, for any performance metric, you would always be able to obtain "more return at a given risk" or "less risk at a given return" by simply moving your portfolio towards the efficient frontier. The VaR and ES metrics are (simply) combinations of portfolio mean and risk: Hence, they can be improved by "moving left/up" as well.

If we follow the mean-risk ptf optimization strategy and use variance/VaR/ES as risk measure, the results in general are different. In other words the efficient frontier are not shared. However, as already said by Enrico Schumann, if the multivariate returns distribution of the assets is Elliptical (with finite variance) the frontier is shared. Note that the class of Elliptical distributions include the Normal one but is much more general, among others include t-student distribution.

The graph above can make sense only in the elliptical case, however It seems me strange yet.

In elliptical case entire frontier is shared and the global minimum risk point as well. In the graph are indicated three separated points/portfolios on the frontier; what minimum VaR/ES points mean? These two point not make so sense. These can be labeled as min mean variance too. Indeed in the horizontal line standard deviation is used. At the same points even min VaR and/or ES are achieved but the graph appear missleading to me.

Moreover in the source, before the graph, it is said that:

In this chapter we formulate and solve the mean-CVaR portfolio model, where covariance risk is now replaced by the conditional Value at Risk as the risk measure. In contrast to the mean-variance portfolio optimization problem, we no longer assume the restriction consisting in the set of assets to have a multivariate elliptically contoured distribution.

Not the answer you're looking for? Browse other questions tagged portfolio-optimization value-at-risk mean-variance expected-shortfall or ask your own question.