In his paper "Smile Dynamics IV" (https://www.fields.utoronto.ca/programs/scientific/09-10/finance/derivatives/bergomi.pdf) as well as in his book "Stochastic Volatility Modeling" (Chapter 9.10) Lorenzo Bergomi proposes a "Skew Arbitrage Strategy". As I understand his logic, he is saying that for short maturities the skew stickiness ratio should be close to 2 (i.e. the implied ATM vol move for an dS_rel % spot move is 2 * Skew * dS_rel ). However, empirically the realised absolute spot move tends to be less than that, so one could buy a gamma neutral 1 month 95/105 risk reversal, delta hedge and hold it for one day. Since we are gamma neutral, as given by a Taylor expansion this position's PnL should be determined by

"skew PnL" is proportional to realised spot vol covariance minus implied spot vol variance and will on average be positive as the realised stickiness is smaller than the implied one.

Vega PnL is small compared to the rest and basically just adds some noise.

"Mark to Market PnL" comes from recalibrating the vol model. More precisely, he is using a simple vol model, which is quadratic in log moneyness

So each day, we would have to recalibrate the skew and curvature. In his book and paper Bergomi says that this Mark to Market PnL should be negligible. However, if I buy a 30 day option today, this will be a 29 day option tomorrow. The 95/105 skew decays (i.e. becomes more negative) as time to maturity goes down, so there should be a downward drift on the PnL. I tried to replicate the strategy and can indeed observe such a downward drift. It is smaller than the skew PnL, but has a non negligible effect on the PnL. In my replication I am using the S&P and my time period is 2010 to 2019, while Bergomi is using Eurostoxx and 2002-2010, so it is possible that I am picking up on a structural difference or a regime shift. 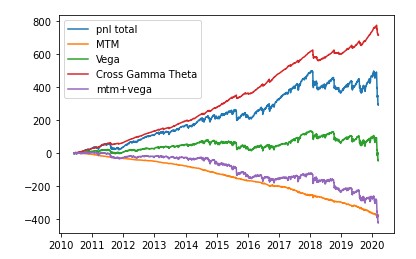 The following scatter plot show Cross Gamma Theta PnL on the x-axis vs the Vega hedged PnL of the risk reversal on y-axis. The regression beta (with 0 intercept) is 1.05 and R^2 is 76%. 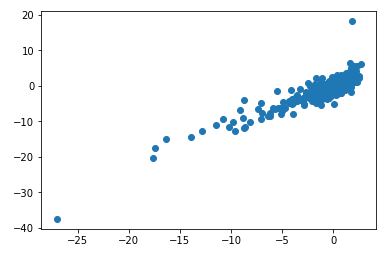 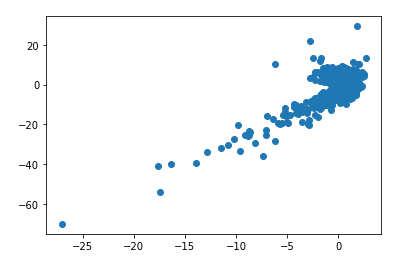 Great question. Let me try to provide some insights and thoughts regarding the points and questions you raised. It may not be a full answer but hopefully it will help connecting the contents in the paper/book with some trading intuition:

Finally, I cannot leave the post without some words of caution. These kind of backtesting strategies are very theoretical and hard (often impossible) to implement in market practice. The following list provides some examples (not limited to!):

4
Delta Hedging with fixed Implied Volatility to get rid of vega?
2
Implied Vol skew VS Local Vol skew (as presented by Derman 1995)
16
Gamma Pnl vs Vega Pnl
1
How to get exposure to realised volatility while being vega neutral?
4
What is "implied skew" and "spot/vol beta"?
3
What are "call and put walls" around a strike price, to kill off vega and prevent gamma?
0
Realizing the same PnL as Gamma Vs Vega