Supply and Demand of Oil [closed]

This is probably not the best place to ask this question but the one that seems most appropriate on stack exchange(doesn't seem to be an economics one).

Anyways, My question, a serious one and not politically motivated, is about "big oil".

Does anyone know why we generally see "big oil" have record profits usually in the time of crisis?

The only way profits can increase from a business is: Demand increases, product price increases, efficiency increases. I think that is pretty much all and everything else will fall in one of those.

Now, when oil prices skyrocket(like that have done in the past and are doing now), demand surely decreases? Maybe this is not true because the high demand for oil?

No matter what the cost of the product to the oil companies, if they kept their same profit per barrel there is no way they can have "record profits" no matter what it costs us. So if they always make $\$50$ per barrel it doesn't matter if it costs them $\$10$ or $\$100$ to pull it out of the ground they will make the same profit(since they will pass only those costs to the consumer anyways).

Efficiency increases is really the only one that could technically lead to an increased profit without increasing demand or product cost to consumer. Usually though this costs money to implement though so must be initially offset. In any case we shouldn't see an increase to consumers which we do in these times of "record profit".

For record profit how can we not be increasing how much we make off each barrel if demand is reduced and efficiency is about the same?

What does this say about big oil? Are they really not "gouging" us? Basically if we jump from $\$2.50$ to $\$5.00$ at the pump and they make record profits doesn't that directly imply they are stacking the deck?

How can big oil reasonably make "record profits" always at the same time when oil is "hard to get"?

Isn't the whole point of supply and demand is that as cost increases it is balanced out by a decrease in demand so the net stays the same? (a sort of zero sum game)

The current jump in price is because one or more suppliers are dropping out. That shifts the supply curve to the left such that for the same demand for oil, the new price is now further up the steeper part of the curve (see the plots below).

The demand for oil will react to that new price, but it takes time.

Sorry that I don't have a more recent supply curve, however below is an old oil supply curve from 2007/2009 data. The numbers aren't exactly the same, but the idea still holds.

The top plot is the complete supply curve. The bottom plot is the same curve, zoomed in to show the price change. 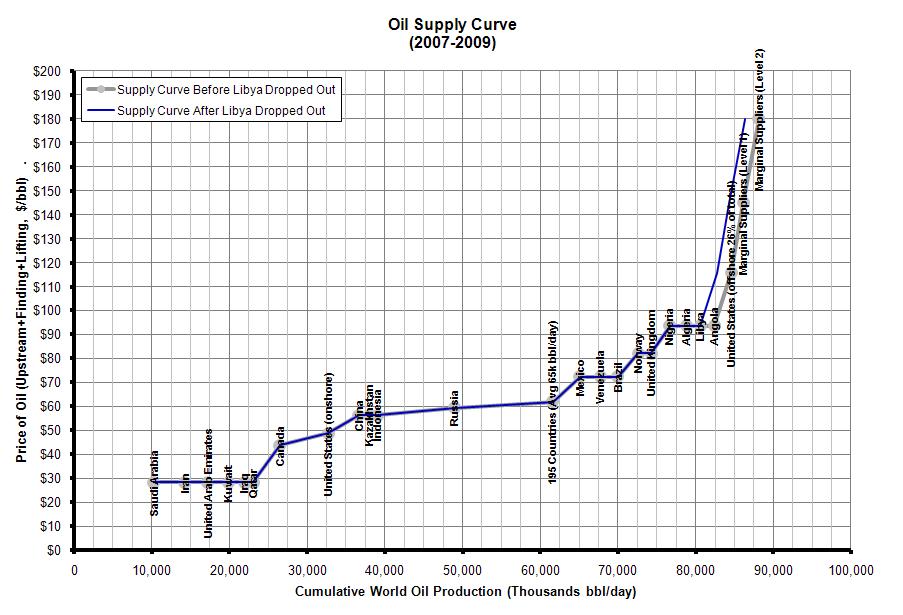 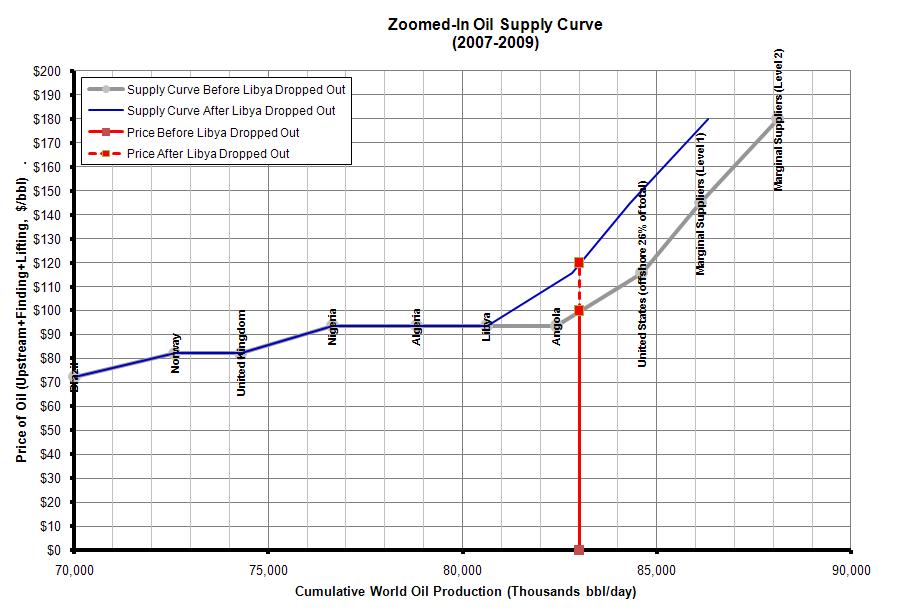 Not true. Explained below.

2) ".....Effectively the "big oil" has the "big market" and hence increases in price will effect them more than Saudi Arabia? If this is true then the big oil companies still have control of their profit and could surely reduce their profit to compensate for the increased in price and keep there total profit about the same? Since Lybia is a short term thing it would pass. I'm not saying a business has to do such a thing but it can....."

Not true, Explained below.

Go back and look at various "big oil" Net Income Statements. Not every year is a profitable year. If "big oil" becomes unprofitable, we won't be driving what we're currently driving.

4) "....How much will it actually reduce it? Would it be drastically different(say 50c or more) or due to the huge market(millions of buyers) it would just be a few cents?...."

Archival, you need to pay attention to how supply and demand works and forget about "fairness theories" and "they should do this.....theories" . If you honestly think "big oil" is making so much money, then couldn't you buy the stock and reap that "big oil money" for yourself? The deeper you get into the numbers, the more you'll realize why it is the way that it is.

I added the following Oil Supply Table to help explain what is going on in the graphs. This table, when plotted, is the supply curve above.

Column I is the name of the country/group, sorted by Cost (the Cost is all production costs plus "enough" profit to sell the oil). The first guy in the list has the lowest production Costs. That Cost shows up as Price in column L. This Price is the MINIMUM price that particular supplier/group would be willing to accept for his oil. Obviously, if the current price is higher, they'll take it, but if it's lower, they'll drop out. Column J tells you how much oil he has for sale, at that price or higher. This means that the Saudis will sell 10248 Thousand bbl/day for a Price of 28.23 USD/bbl or higher (any lower and they're out).

In the above graphs, I started off with Libya still providing oil (the gray curve in both graphs).

In the second graph, I chose 83 million bbl/day as the example Total Demand (the red line in the graph). When you look at column K of the table, ALL SUPPLIERS up to and including the "United States (offshore 26% of total)" will be selling their oil at the going price. That price is somewhere between 93.57 USD/bbl and 115.66 USD/bbl (the graph is drawn with a linear interpolation between prices). From the second graph, on the gray curve, it looks like 100 USD/bbl is the going price.

So, before Libya drops out, to supply 83 million bbl/day of oil, the market (ALL SUPPLIERS up to the required demand) requires about 100 USD/bbl. Whatever "extra" (above "enough") profit they make is the difference in the market price and their Cost. EVERYONE that sells oil into that market gets 100 USD/bbl.

Now, Libya drops out (everything else is the same).

Column N shows what happens to the Cumulative Production when Libya drops out. Everything is the same above the pink line. The cumulative supply available in both column K and N up to Algeria is 78.8 million bbl/day. However, since demand is 83 million bbl/day, more suppliers are required to fulfill demand. With Libya out, you have to go all the way up to "Marginal Suppliers (Level 1)" to fulfill demand. Their Cost is 145 USD/bbl. From the second graph, on the blue curve, due to interpolation, the going price is now about 120 USD/bbl.

So, after Libya drops out, to supply 83 million bbl/day of oil, the market (ALL SUPPLIERS up to the required demand) requires about 120 USD/bbl. Since this is now 20 USD/bbl higher than before, the profits of ALL SUPPLIERS that are selling oil will jump by 20 USD/bbl.

Notice that no one manipulated demand or supply, and that the SAME supply curve was used both times. The only thing that changed was, Libya dropped out.

Now, go back and think about how you would implement ANY kind of "fairness theory" or "they should do this....theory". The supply curve is the supply curve. It depends on the Costs of the suppliers and how many suppliers are available to provide oil. It's that simple. 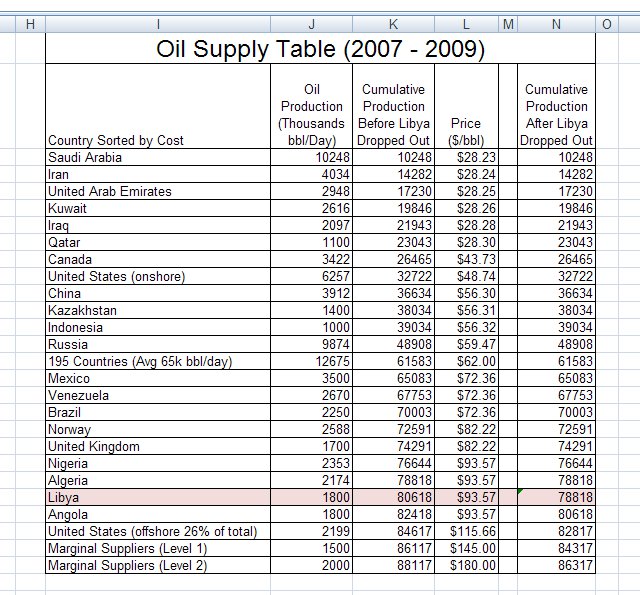 This occurs because the price elasticity of demand for oil is near zero, which is to say the demand curve is nearly vertical. This is partly a limited rate of production story (i.e., in the short term the rate of oil production is fixed), but it's mostly a limited substitutes story. Our cars run on gas, as do the trucks that move goods around the nation and ships that move good internationally. If I go to the store and the price of Coke rises, then I can buy a Pepsi; if the price of Pepsi rises I can buy an RC; and so on. But if I go to the gas station and the price of gas rises, I can't fill my car with some near substitute, despite being promised a Mr. Fusion for my Delorean. True, we can change our habits, combine trips, car pool, etc., but these are at the margins and it takes time to change habits.

So oil companies make money during these times because people are willing to pay a premium to secure access to this good (via futures contracts) that everyone needs.

demand surely decreases? Maybe this is not true because the high demand for oil?

Demand for oil, like grains, is very inelastic. People have a very hard time changing their energy consumption habits when price shocks happen. Some of this is unwillingness to change, but a lot is that there are very few alternatives. Most people in the US live too far from work to walk or ride a bike; public transportation is non-existant in most parts of the US.

Staple grains, like rice in Asia, or wheat in US, also have extremely inelastic demand curves. When people grow up with a culture of "it isn't a meal unless it has ...." then those people are more likely to riot than change what they eat (see rice riots in 2008, and the current one in Vietnam). We have huge corn (maize) subsidies in the US to prevent reoccurances of the riots and protest marches (in the early 1970s) of farmers and housewives (while that administration had great experience dealing with rioting hippies, they could not figure out how to cope with "good" people rioting).

Efficiency increases is really the only one that could technically lead to an increased profit without increasing demand or product cost to consumer. Usually though this costs money to implement though so must be initially offset.

The turn-over in the US automobile fleet is close to 10 years. Very few people can afford to purchase a new car when fuel prices change drastically, and it would take a very long time for the automakers to switch to new fuels, fuel stations to switch to new fuels and for consumers to buy new cars. Further compounding this issue are the emotional attachments people have with their car (or the status implied by certain makes and models) which is why most people get fleeced purchasing cars - the salespeople see them coming and know just what buttons to push. The Otto cycle (the thermodynamic cycle used by gasoline engines) is about as efficient as it can be made. Any large improvements in energy consumption for autos won't come from new engines; the only practical improvements are in weight reduction and speed reduction. The failure of the national 55 mph standard shows that we're unwilling as a nation to make the speed reductions needed, and the huge popularity of SUVs shows we won't make the weight reductions needed.

Not the answer you're looking for? Browse other questions tagged economics or ask your own question.

7
Why are regressors squared and not ^1.5 or ^2.2 or ^2.5?
4
Particular kind of market game
1
Is an economy where money yields interest able to be sustainable and healthy? If yes, how?
0
Fannie Mae and Freddie Mac as substitute benchmark bonds
6
What is the relation between Relative Risk Aversion and Market Price of Risk