Is there any good research on support and resistance?

Could somebody advise me on where to find good literature on the justification or motivation for using support and resistance lines - and also lines of maximums and minimums. In finance, it is sometimes difficult to find the relevant literature because even if a book does not claim to be able to make you rich, the content of the book can still be bad.

Any good literature on support/resistance would be nice.

Contrary to popular belief, there does exist some truly high quality academic literature on this topic. The most sophisticated and well executed paper in this regard is Lo, Mamaysky, and Wang (2000). They write:

In this paper, we propose a systematic and automatic approach to technical pattern recognition using nonparametric kernel regression, and we apply this method to a large number of U.S. stocks from 1962 to 1996 to evaluate the effectiveness of technical analysis. By comparing the unconditional empirical distribution of daily stock returns to the conditional distribution—conditioned on specific technical indicators such as head-and-shoulders or double-bottoms—we find that over the 31-year sample period, several technical indicators do provide incremental information and may have some practical value.

Moreover, our methods suggest that technical analysis can be improved by using automated algorithms such as ours and that traditional patterns such as head-and-shoulders and rectangles, although sometimes effective, need not be optimal. In particular, it may be possible to determine “optimal patterns” for detecting certain types of phenomena in financial time series, for example, an optimal shape for detecting stochastic volatility or changes in regime. Moreover, patterns that are optimal for detecting statistical anomalies need not be optimal for trading profits, and vice versa. Such considerations may lead to an entirely new branch of technical analysis, one based on selecting pattern-recognition algorithms to optimize specific objective functions.

A search for this paper also reveals other potentially valuable academic articles on technical analysis and chart patterns, such as this list.

Below, I see a lot of support and resistance. Here's the code: 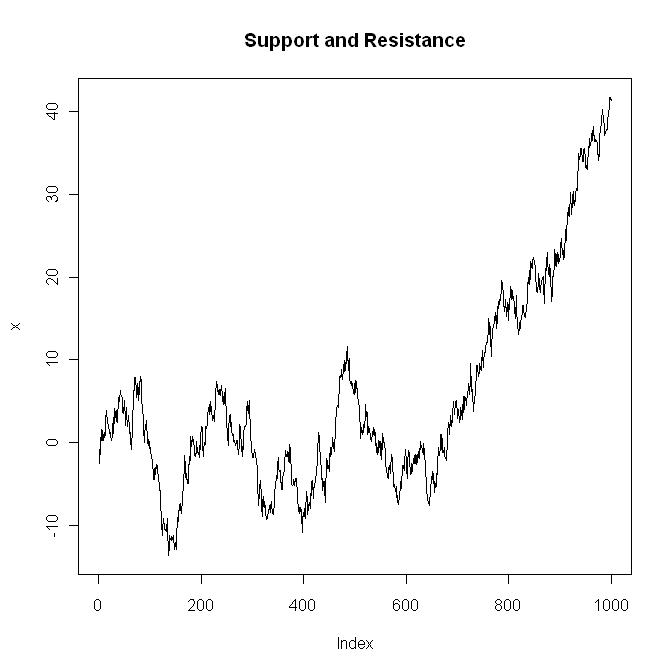 Gortaur, I put my answer here to avoid filling up the comment area.

The reason that I posted that article is because it, and a few others, are consistently referenced as "credible proof" that support and resistance, as predicted by certain groups, is a profitable strategy. As far as I can tell, "credible" comes from the fact that the author worked at FRBNY, not her results. "Proof" comes from those that accept her results, not from repeating her results. If you pick at that article long enough, the term "garbage" might just come to mind.

Don't get me wrong. Unlike others, I don't think the author was trying to mislead anyone. I just think that she didn't chew on her methods well enough.

Your question 2) ".......the fact that S&R appear in random walks and the human's eye try to catch it everywhere do not prove the fact that these notions are meaningless in real life where prices are NOT random walks and random walks are just model to simplify dynamics and don't care about the game theory part of the question (because the system is too huge)........"

If you run that (or similar) code over and over, and count the plots without "support" and/or "resistance", you might not get to 1. If it's that close to 100% of the time, how can you tell the difference between S&R that is random and S&R that isn't? And, if both the random series and the real series "bounce" off of some arbitrary lines, does it really have to mean something (more importantly, in the random case, you know it doesn't mean anything)? My point is really simple. By the time you devise a test that means something, and then run real data through it, you might find that you can't tell when random data has been passed through it. If so, then you're back to square one.

You don't have to believe me, try it yourself. As a place to start, go to .pdf page 8 in that article and look at the test (Calculating Artificial S&R Levels). Draw what is described, for a few days worth of data. Then ask yourself, could you come up with some S&R lines that will beat her test? If so, does her test mean anything? And, if you use your method of beating her test as your test, can it provide a way for you to differentiate random versus non-random results?

I'm not sure that I understand your questions, but here goes.

By using S&R levels, aren't you trying to react to something that the market is actually doing, something meaningful? For instance....a bunch of people/money want to buy at support and sell at resistance? The idea is that something meaningful and non-random is happening at areas of S&R.

The problem is, a random process will consistently generate lots and lots of S&R levels, and you can be 100% sure that those S&R levels mean absolutely nothing. Think about it, how can a random process NOT turn and go the other way? You can calculate the odds.

Obviously, a lot of people have decided that they can't differentiate random versus non-random S&R levels with price alone, so they add volume, seasonality, sun-spots, or whatever. Lots of ink has been wasted on this subject.

The bottom line is, whatever tool you develop to identify and use S&R levels, when it's all finished, run the above random "x" through it and see if your answers are any better or worse. If the performance isn't statistically different when you run random data through it, is the tool doing anything worthwhile?

S&R levels can be obtained quite easily. However, you will not find this data in most references. Professional day traders use value areas from the previous day as well a forming value areas in the current session. There are several crucial levels gathered from the previous GLOBEX session. These can be derivied from any market. These support/resistance levels can be used in conjunction with similar markets and Indecies.

These levels are not traded based upon this information alone, but in conjunction with several other crucial indicators. I could write a book on how this is accomplished; It is also of great importance to understand the levels with the other data, in real time, as well as the use of discretionary constants. This is a paradox, but based upon years of active participation in incorporating these ideas into an outline to guide each individual trade, in a market/markets, which change everyday.

I have not come across any such complete information on how this is accomplished, nor any consistently successful trader that has documented such a strategy. I am aware of the effectiveness of such a methodology and know why one will never come across such information, in print form.

A key to understanding support/resistance is to first understand that, while helpful, especially when using the CORRECT daily levels, price is the last data/imformation to be posted. Therefore, any technical analysis that is based upon price alone, will not hold up to any models over time. If this where not true, HFT algorithms would be able to identify this and all market activity would cease.

Although thsi doesn't answer your question drectly, I wanted to shed some light on the complexity of the mixture of relative data one needs to identify, establish, comprehend and reduce into the least amount of data required to make immediate correlations so immediate action can be tamen, o ce the criteria is met, to take a trade with a higher probability of success, on a consistent basis, in a market structure that changes daily. While this craft is rewarding, once you are able find these aforementioned mechanisms, it is time consuming and 99.8???% will not discover even this much content I've presented here. The majority will seek price action alome, complimented by levels of support/resistance (price action). Again, I reiterate, price is the last element in the process to move. Those that base their strategy on that concept alone, had best do so with a simulated account.

This leaves many questions unanswered, but at least you know what the questions are, which places you with qn edge that over 90% do not know. Why would I divulge such valuable information? I wish I had figured this out many years ago, when I traded my first Futures trade. What took me a long time to figure out, can help you, so you dont follow that mistaken path.

I surmise Price action remains popular because it is the easiest way to look at a chart; Because people, like nature, look for the path of least resistance (which is often an illusion) and because one can get luck using price action in a strong trending market, with short term success. This is why I had a difficult time guiding myself from the seemingly easy way to get rich quick... and turn a large fortune into a small one. In the early 90's, I had a remarkable run shorting the British Pound using Fibonacci numbers for s/r levels a d price action alome. What I had not known was that a man by the name, George Soros, was also shorting the British Pound...Eventually breaking the Bank of England.

Of the three largest trades in history, Soros was imvolved in two of them; This being the largest. That was pure dumb luck on my part. That run ended up costing me much more over time as well as wasting valuable time trying to figure out why this method stopped working. A bit of fundimenta analysis is still a requirement.

This is the first and only post I've ever written on such information. I have no monetary interest in doing such. My only interest is perfecting my art as a day trader. But since much of this was taught to me by an unknown market wizard, I want to pay it forward. This post should contain my email address, but since I'm new to this forum, I'm not sure you are able to contact me directly. You may contact me at survivormanbrad@gmail.com. If I do not get back to you, try again, as that is not my main email and I only go through them periodically. However, now that I've given this information, I will afford time for inquiries.

Do not concur with the paradigm behind this thinking:

"The problem is, a random process will consistently generate lots and lots of S&R levels, and you can be 100% sure that those S&R levels mean absolutely nothing. Think about it, how can a random process NOT turn and go the other way?"

"Random" means 50/50. Whoever believe the markets are random walks do not (should not) trade. "Random process"?? Maybe a "probabilistic process" would be a less misleading term...

"You can calculate the odds.": well, there is much more to this then meets the eye of the typical statistician...

I am looking into:

Bayesian statistics for creating causality based models for decision making

Not the answer you're looking for? Browse other questions tagged strategy research technicals or ask your own question.

1
List of long-Term Support & Resistance in forex or stocks

31
Any research on how natural language processing can be used to forecast stocks?
10
Any research paper on stop loss?
3
Index and alpha strategies research analyst
7
Is there a compilation of old Lehman research out there?
4
Why are there so few published research papers that apply Deep Learning to Algorithmic Trading?