Why and when we should use the log variable?

Normally, I see finance papers use the real ratios but log regarding non-ratio variables. For example, some papers used log(asset) or log(1+firm age) or log GDP, but regarding the ratio, they use the actual value. I am wondering why and when we should use log with a variable. I am wondering if it relates to standard errors.

Based on your paper and variables, I assume you ask about the use in econometric models. There are some rules of thumb for taking logs (do not take them for granted). See for example Wooldrigde: Introductory Econometrics P. 46.

Now apart from the interpretation of the coefficients in regressions (which is in itself useful), the log has various interesting properties. I did this a few years ago, simply copy pasting here (please excuse that I do no change the formatting and make charts prettier etc.).

Why the natural logarithm is such a natural choice?

There are 6 main reasons why we use the natural logarithm:

Why is that? Well there are several ways to show this:

If you have two values: 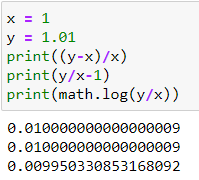 Hint: This is not a computational error in the exact percent calculation:
Python Docs
Rounding in Python
Is floating point math broken

This allows you to greatly simplify certain expressions.

Now combining the established properties we can rewrite

can be rewritten as

Reason 2: The log difference is independent of the direction of change

Another point worth noting is that 1.1 to 1 is an almost 9.1% decrease, 1 to 1.1 is a 10% increase, the log difference 0.953 is independent of the direction of change, and always in between of 9.1 and 10. Moreover, if you flip the values in the log differences, all that changes is the sign, but not the value itself. 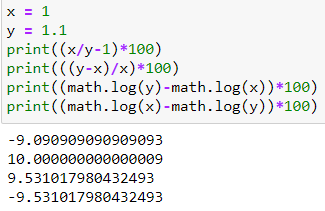 Now, if we plot 𝑥 against time using a standard (linear) vertical scale, the plot looks exponential. The increase in 𝑥 becomes larger and larger over time. Another way of representing the evolution of 𝑥 is to use a logarithmic scale to measure 𝑥 on the vertical axis. The property of the logarithmic scale is that the same proportional increase in this variable is represented by the same vertical distance on the scale. Since the growth rate is constant in this example, it becomes a perfect linear line. 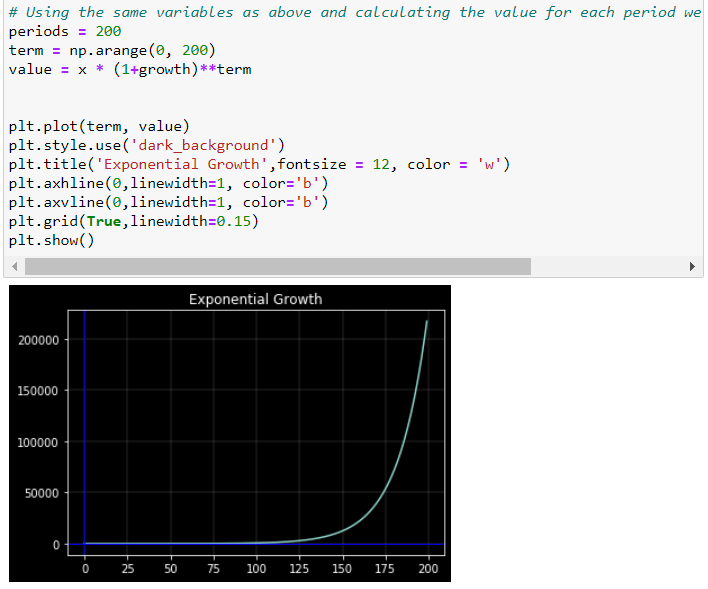 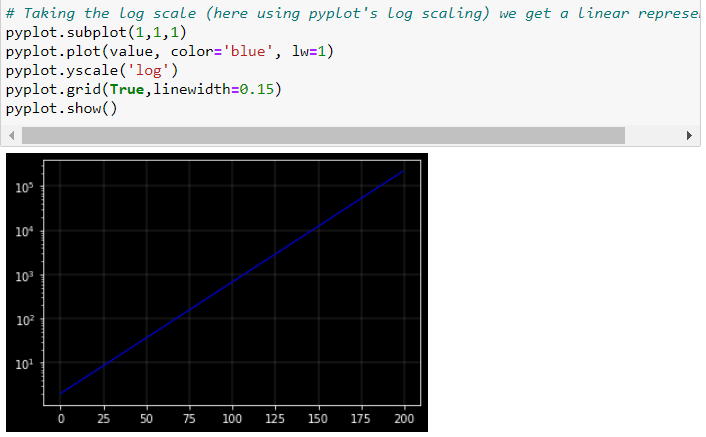 This shows the effect of logarithmic scales nicely on the vertical axes.
The reason is that the distances between 0.1 and 1, 1 and 10, 10 and 100, and so forth are the same in the logarithmic scale.
Reason 4: Symmetry explains this in more detail.

In contrast to these examples, economic variables such as GDP do not grow at a constant growth rate every year.

A logarithmic transformation reduces positive skewness because it compresses the upper end (tail) of the distribution while stretching out the lower end. The reason is that the distances between 0.1 and 1, 1 and 10, 10 and 100, and 100 and 1000 are the same in the logarithmic scale. You can also see this in the pyplot chart above. 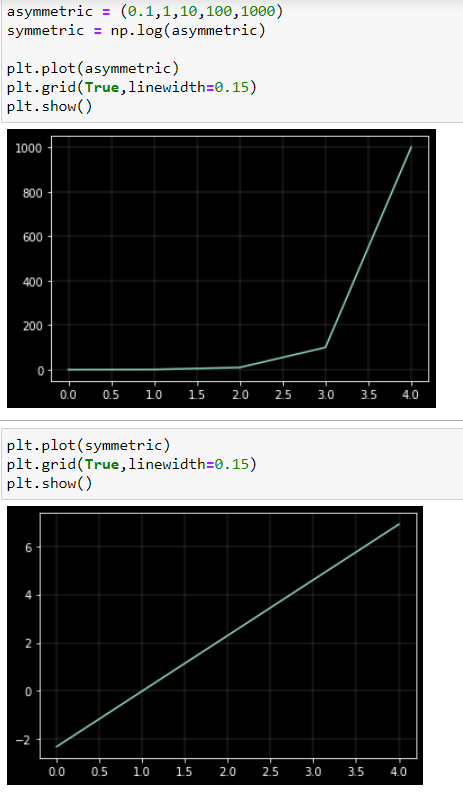 This has another important implication:

$\mu$ is the mean and $\sigma$ is the standard deviation of the normally distributed logarithm of the variable. 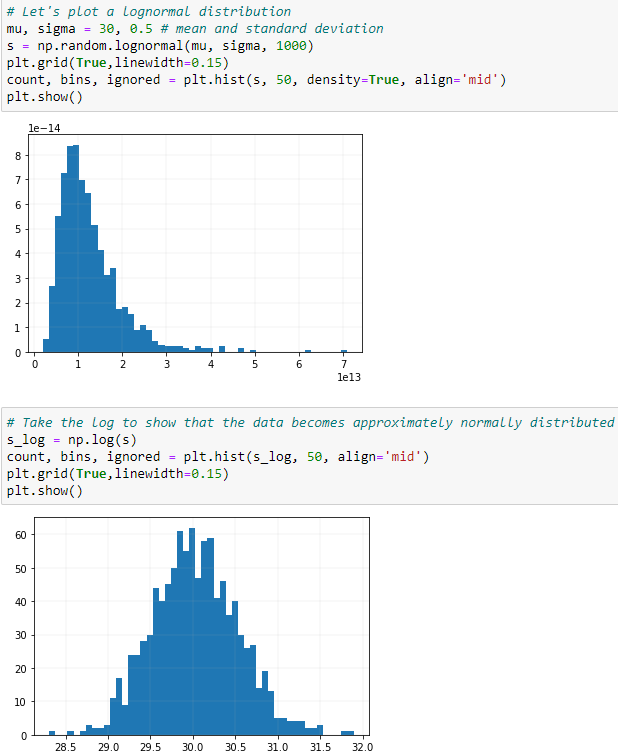 The following section demonstrates that taking the products of random samples from a uniform distribution results in a log-normal probability density function. 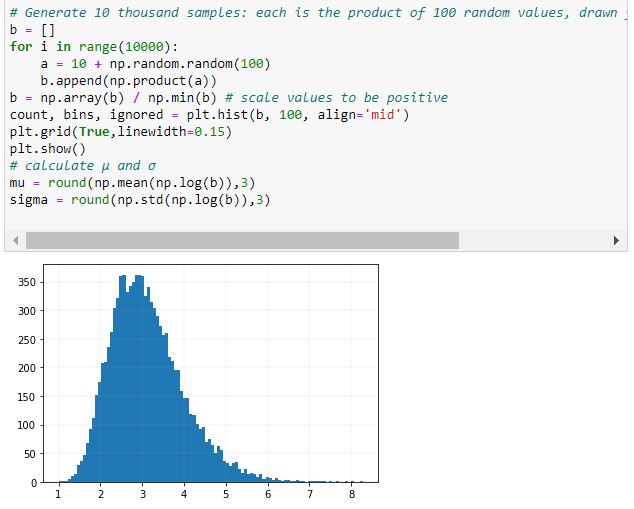 The probability density function for the log-normal distribution is:

where $\mu$ is the mean and $\sigma$ is the standard deviation of the normally distributed logarithm of the variable, which we just computed above. Given the formula, we can easily calculate and plot the PDF. 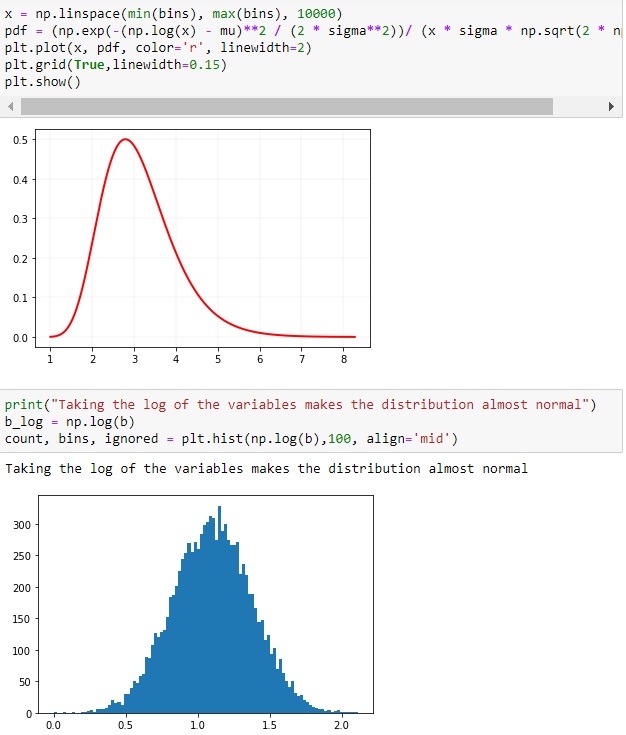 Reason 6: Data is more likely homoscedastic. Often, measurements are seen to vary on a percentage basis, for example, by 10% say. In such a case:

Even if it's not on an exact percentage basis, often groups that tend to have larger values also tend to have greater within-group variability. A logarithmic transformation frequently makes the within-group variability more similar across groups. If the measurement does vary on a percentage basis, the variability will be constant in the logarithmic scale. Please check this reference for more info.

Let's start by generating a conditional distribution of $y$ given $x$ with a variance $f(x)$.

In plain English, we need something where the variability in the date increased when $x$ increases. 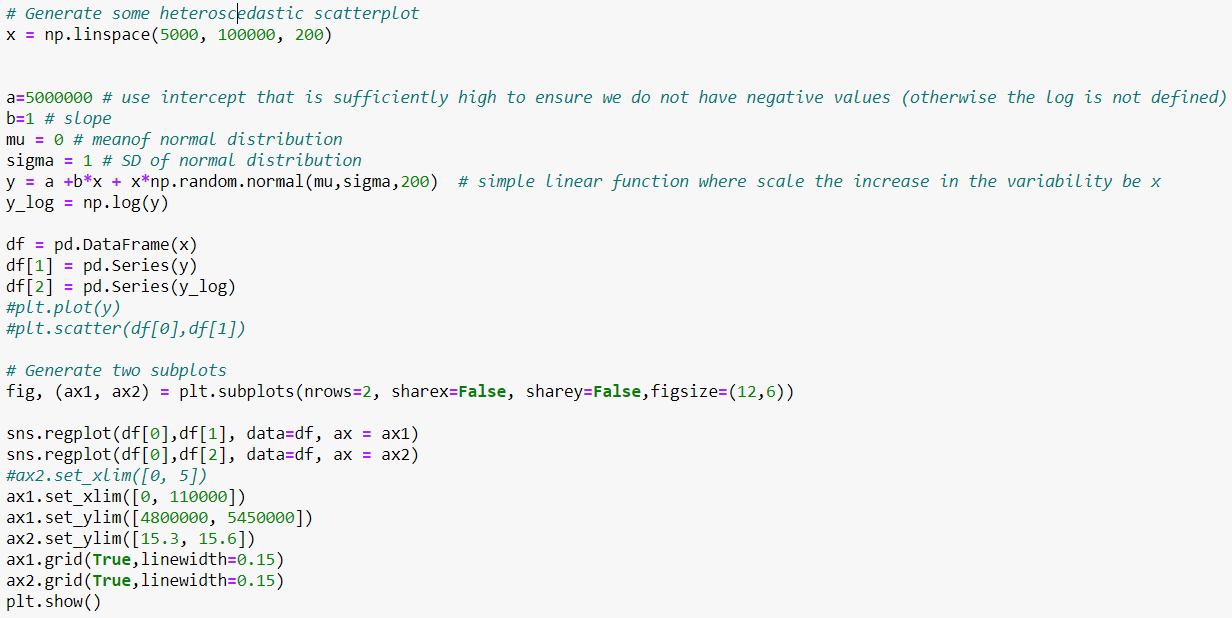 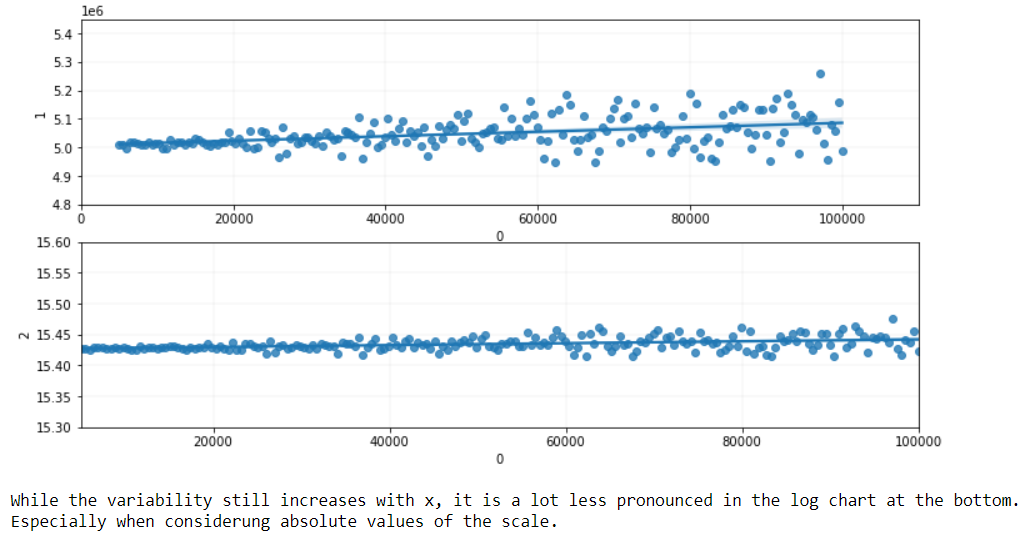 I cite from the fantastic book by Bali, Engle, and Murray (2016): Empirical Asset Pricing: The Cross Section of Stock Returns.

In what follows, they talk about the pricing of size in the stock market (think of market cap = price times shares outstanding). In regressions, you often find researchers using log market cap. Here, the authors explain why:

There is one issue with the measure that can have a substantial impact on empirical analyses. As will be seen shortly in Table 9.1, the cross-sectional distribution of market capitalization is very highly skewed. This phenomenon arises because there are a small number of stocks whose market capitalizations are very large. The presence of these large stocks can impair the ability of regression analyses or other analyses that rely on the magnitude of the measure (instead of just the ordering, as in portfolio analyses) to produce accurate parameter estimates. For this reason, researchers frequently use the natural log of market capitalization.

As you see, market cap is very skewed and has an enormous kurtosis (fat tails). This is due to some outliers with huge market cap (firms like Apple skew the entire distribution). Taking the log standardises the variable somewhat.

Numerical example: Imagine a firm has a small market cap of only two million USD. Its log size is then $\ln(2\cdot10^6)\approx14.5$. Apple has a market cap of about two trillion USD and a log size of $\ln(2\cdot10^{12})=28.3$. So, while Apple is a million times larger than our artifical firm, its log size is only double as large. Taking logs dramatically reduced the difference between the size of both firms.

Note: A common side effect is that logged variable become statistically more significant. So, keep this in mind when you read papers :)

Generally, we model a lot of quantities in finance as exponentially growing variables like stock price in Black Scholes Model or GDP, because these quantities grow continuously every year. Also, we humans are most comfortable with linear relations, so while studying GDP growth or stock returns, it becomes natural to use logarithms to get linear models. It's elaborated more with a few more points here.

Not the answer you're looking for? Browse other questions tagged regression methodology or ask your own question.

6
If the volatility of pounds/euros = .2 do we know anything about the volatility of euros/pounds?
0
How can I measure returns such that the average is useful?
2
Difference between 5Y breakeven inflation and 5Y5Y inflation forward?
-4
in time series analysis or finance people use log return for inference but returns can take negative value
0
Implied volatility and realized volatility
-2
Is it possible to calculate logarithmic return for short position?
0
What is the relation between the trend of log and linear in accumulative data?
0
Why should we use log returns? Log normality

7
Why are regressors squared and not ^1.5 or ^2.2 or ^2.5?
5
How does the number of free dimensions of a model affect its required size of sample?
43
Machine Learning vs Regression and/or Why still use the latter?
1
Lagged dependent variable, yes or no?
8
Using cross-sectional factor model (BARRA type) returns in a time series factor model (Fama-French type)?
4
How can you determine the correct significance of the Shiller P/E regression?
7
Fama Mac-Beth (1973) vs Fixed effect
0
Extrapolate Implied Volatility Surface