Stack Overflow for Teams is moving to its own domain! When the migration is complete, you will access your Teams at stackoverflowteams.com, and they will no longer appear in the left sidebar on stackoverflow.com.

Check your email for updates.

I'm confused about realized variance. I roughly know the theory around Ito Calculus and quadratic variation and integrated volatility so I understand what realized variance measures (even though as pointed out you don't need Ito Calculus to understand RV). I've read a bunch of papers on the topic of modelling volatility using GARCH(p,q) and understand that conditional heteroskedasticity tends to disappear with higher frequency.

What I am confused about is how realized volatility is used to do out of sample prediction for the volatility. Amongst the many papers, I believe one mentioned using it as a tool for evaluating forecasts from GARCH(1,1). Another mentioned that you can calculate realized volatility series and then use standard ARMA models to do forecasting.

I am writing my thesis and my goal is to model volatility. I have 1-minute bar data. I was going for GARCH but my professor said just go straight to realized vol since I have high frequency data. However, I just don't know if realized vol can be used for modeling. How does one predict $\sigma_{t+1}$ using realized vol?

EDIT: To clarify, my question is how can one use realized volatility as a volatility model to do out-of-sample prediction? GARCH(p,q) gives us a model for $\sigma_{t+1}$ given data up to t. How is RV a model and how can I do out of sample prediction using RV?

It has become apparent that standard volatility models used for forecasting at the daily level cannot readily accommodate the information in intraday data, and models specified directly for the intraday data generally fail to capture the longer interdaily volatility movements sufficiently well. As a result, standard practice is still to produce forecasts of daily volatility from daily return observations, even when higher-frequency data are available.

However, Diebold (1988) shows that conditional heteroskedasticity tends to disappear with the increasing of the sampling interval.

The TLDR; to your question:

An introduction: From GARCH to realized GARCH

Many of my arguments below, can be found in the paper of Hansen et al. (2012) together with Peter Reinhard Hansens slides on the same topic. Let us briefly consider the vanilla GARCH model. We define the de-meaned returns on the form:

with the GARCH equation being:

where $x_t$ is a realized measure of volatility, eg. Realized variance (RV), Realized kernel, etc. In the slides (p. 37) they do a small experiment and observe how many days it takes for the vanilla GARCH model to update to a new level of volatility, as opposed to the GARCH-X model: 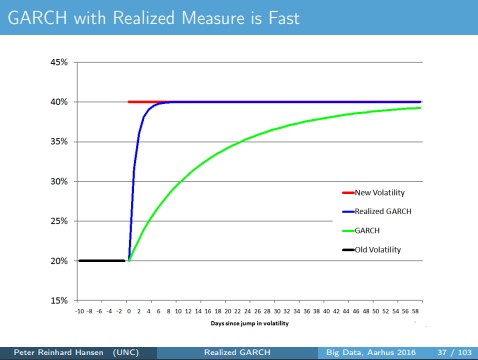 Observed above, it is clear that the GARCH-X model is much faster at updating to the new shift in volatility.

NOTE: We utilize both high- and low-frequency information by adding an external regressor instead of replacing noisy squared returns, $r_{t-1}^2$, with $RV_{t-1}$ and adding no external regressor. The additional information in the former approach gives better volatility estimates (we also have one more degree of freedom).

While the GARCH-X specification improved the time it took for the model to update to the new level of volatility, it did not permit multi-period forecasts due to lacking an auxiliary model on the realized measure. This is where Hansen et al. (2012) comes in.

In Hansen et al. (2012) they extend the GARCH-X model to incorporate intraday return variation, by adding a measurement equation as an external regressor to relate the estimated realized measure (eg. $RV$) to the latent volatility process. Moreover they include a function that captures asymmetric reaction to shocks (ala. EGARCH type structure), thus making a very flexible and rich representation. They provide two specifications called the linear Realized GARCH model and the loglinear version (LRG). I will focus on the linear specification. From the GARCH-X model they extend the $x_t$ via the measurement equation given by:

where $u_t \overset{iid}{\sim}D(0,\sigma^2_u)$ for $D(\cdot)$ being a generic distribution (usually Gaussian) and furthermore $z_t$ and $u_t$ are independent. In their paper they write some important features of the measurement equation,

The inclusion of the realized measure in the model and the fact that $x_t$ has an autoregressive moving average (ARMA) representation motivate the name Realized GARCH. A simple yet potent specification of the leverage function is $\tau(z) = \tau_1 z + \tau_2 (z^2-1)$, which can generate an asymmetric response in volatility to return shocks.

As you pointed out above, you can use an ARMA representation to explain the realized variance, however, here they combine an ARMA representation, with a GARCH equation. Moreover, as seen above, they define a simple and yet potent specification of the leverage function based on the Hermite polynomials (truncated at the second level). The function is convenient since it ensures $\mathbb{E}\left[\tau(z)\right]=0$ whenever $z$ is specified with mean zero and unit variance. Based on pure intuition, we see that ceteris paribus, when $\tau_1 < 0$, $x_t$ will be larger for a negative shock (measured by large negative residuals $z_t < 0$), since $\tau(z)>0$. For $\gamma>0$ this will in turn lead to a pronounced effect in $\sigma^2_t$. Their paper contains many additional discussions on the realized GARCH model, however, I have briefly summarized their conclusions below.

Conclusions of their paper:

I will briefly discuss some other realized models you can research yourself, without going into details:

Below, I have provided a clear and concise meaning of the different terms and how they relate to each other:

Many of the realized measures and models are implemented in R, either via the rugarch package or the highfrequency package. I hope this provides some insight. I wish you good luck with your thesis.

3
Is there a HAR that deals with the leverage effect?
3
Volatility Modelling negative GJR-GARCH-X coefficient
1
Volatility forecast for 5-minute frequency data
0
Can one estimate rather than forecast volatility using the GARCH model?