I just want to know if there is an analytical solution about FX American forward. I recently get a solution that computes price for each τ-maturity forward contract and then take a maximum price. So, I have two questions:

I have much confusion about this. Hope to get your help! Thank you !

How exactly do you compute the price of a forward? At initiation, the price of any forward is zero. what do you mean with they "They all have stopping time"?

The solution is incorrect and the exercise boundary can only be found be solving a PDE:

The same as for American call or put option applies for forwards. At any time there is an exercise boundary and when spot is in side this boundary, there’s no motivation of early exercise. When spot is outside, it’s always beneficial to exercise. This boundary can only be determined by solving the PDE.

There are a few generalizations when modelling these:

Now, in terms of the actual difference to a normal forward, it is very small in many circumstances.

I think you misread. I wrote vol has a significant impact. In BBG you just need to type OVML FLEX which loads the Flexi Forward template. I am not aware of this being traded outside of FX.

If you intend to do this for equity, you can load DLIB (provided you are Bloomberg anywhere) and load the flexi forward template there. It will only be for FX again but it is a BLAN template, which means you can re-write the code for equity. These are a bit strange as you need to copy paste the code in a DLIB BLAN template and add the deal parameters manually.

If you are familiar with coding, you can see it models it as a daily Bermudan (since it is Monte Carlo). The regression variables (needed for the implementation) exclude interest rates here but in theory you could also implement this for rates and use HW1F-BS or HW1F-LV in BBG. Because of different discount factors, the NPV of different tenors has a different slope for each forward contract $F-K$. As a holder of American FWDs, you benefit from this and the payoff is no longer a straight line. Therefore, vol causes convexity adjustment and the break-even strike deviates from the vanilla forward curve a lot (as explained above).

There is a white paper called Overview of American Monte Carlo Pricing in DLIB that explains this Longstaff-Schwartz algo used to price in DLIB. A word of caution, the standard error in this exercise will almost certainly be higher than the resulting price which means you are probably better off to simply book a OVME forward deal (unless your expiry is very long and you look at countries with large interest rates - but there aren't many left at the time of writing).

If BBG shows a vega or not is generally not sufficient proof that the contract has no vega. It is a complex PDE solver and they may just simplify things and do not provide an appropriate PDE grid for Greeks. Frequently, this is done via the Crank-Nicolson Scheme as explained for example in Computational Methods Option Pricing from Y. Achdou and O. Pironneau, Society for Industrial and Applied Mathematics, 2005. However, there exist several finite different solver schemes.

In that case however, vega can be positive (I just tested and it works as I described - higher rates and longer expiry makes vega higher). 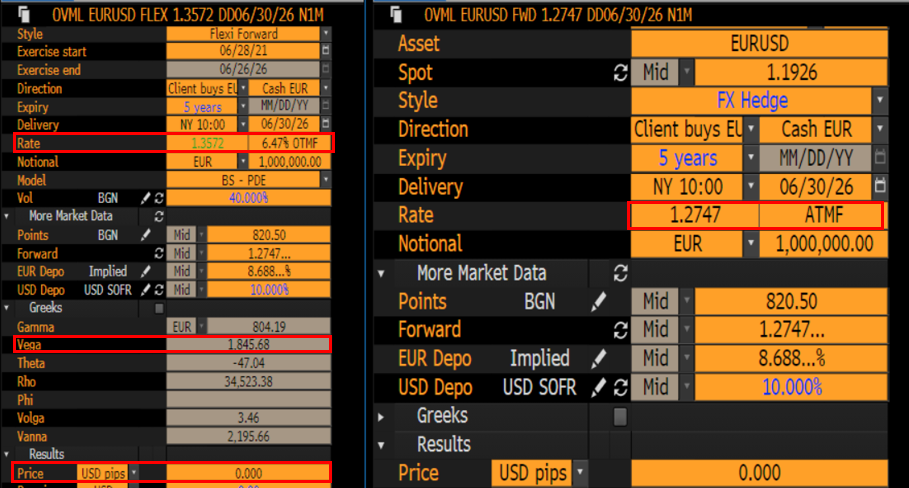 It is a forward after all, so impact will have to be marginal compared to an option. That said, you can clearly see how the break-even strike is very different from the ATMF here (with some adjustment in rates and vol to make it more obvious). Note that OVML solves for strike here (as a FWD is generally zero cost). You can amend that if desired.

There exists no closed form solution that approximates this (that I know of). The idea is almost identical to an American option problem and no simple rule exists to price this. However, since you have BBG, why re-invent the wheel? Simply use their template (which I think is doing a solid job in this case).

The help desk can for sure provide you details (provide a white paper, show you how to load it and use the template(s), ...).

Not the answer you're looking for? Browse other questions tagged options forward american or ask your own question.

4
Options pricing exercise - American call option on a futures contract
1
Monte Carlo Option Pricing: Averaging Price Per Path
2
Pricing American Put Options via Binomial Tree in Matlab
2
Longstaff Schwartz Algrorithm in R
4
Option pricing: Relationship between Theta and early exercise
1
Difference between Price and Value in Forward and Futures
1
Under what conditions will both European and American put options worth the same?