With UK's inflation surging to 3.2% as per the published figures today reported by the FT, it is interesting to ponder the effect of rising inflation on FX rates.

The article linked above points out that "market reaction to the data was muted", with:

Now here is my question: why does the GBP rise on higher inflation? In my opinion, there are two counter-forces at play here:

Perhaps this is what it boils down to: does higher inflation in Great Britain translate in any way to lower purchasing power of GBP "abroad"?

Kenneth Rogoff and Richard Meese received an incredulous reaction to their now-famous paper showing that random-walk (RW) forecasts outperform economic models of exchange rates. Reactions were along the line of “You just cannot possibly have done it right” or "the results are obviously garbage". Turned out they were correct. Rogoff makes an interesting point in some later paper. If money supplies are hard to predict, then one should not blame the models if exchange rates are hard to predict. It is unforeseen news that matters. However, as Rogoff further stated, their finding was even more extreme. They tested predicting the exchange rate in one year, given the information about what money supplies, interest rates, and outputs are going to be in one year. However, even in this case, no economic model beat(s) the RW.

Unless inflation is substantial, it will never be clear what the impact will be. If it is substantial, the interest rates will be too low (hence money supply to large) to decrease inflation. If so, the currency will depreciate for sure. There is ample evidence for this (Venezuela, Turkey, Ecuador....)

The image below is from FRED using FredApi in Julia. 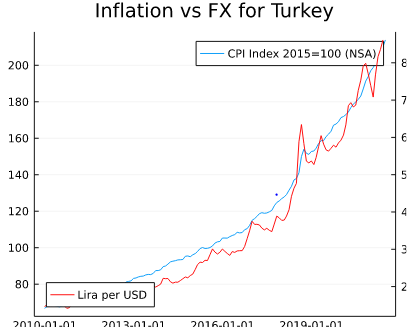 If it is just somewhere around expectations, there really is not much you can say (in terms of forecasting). Rogoff and Meese's findings (the so called Meese-Rogoff puzzle were shown to not only be correct, but consistent throughout time and countries.

There are numerous theories:

Dornbusch (1976) started the sticky price models. Only difference to flexi price is that PPP (good market) does not hold in the short run. There are numerous extensions that all work well in the Monday morning quarterback sense (with the benefit of hindsight, you believe you can explain a lot).

There are numerous so called FX puzzles:

Engle and West (2005) show in the journal of political economy that exchange rates can be expressed as the expected discounted value (NPV) of observable and unobservable fundamentals (basic idea of a forward looking flexible price monetary model).

Long story short, 3.2 is nowhere near a value where you would be able to get a clear answer. The FX rate will fluctuate randomly and may increase or decrease given a release of inflation data. Moreover, that is usually not the end of the story. If now, the market expects rate hikes or not, makes a big difference. There will be other news and potentially misleading numbers when looking at core vs headline, or RPI vs CPI levels and so forth.

With regard to carry trades: If covered interest rate parity were to hold, any higher interest in one country will be offset by a depreciation in that countries currency so that an investor will be equally well off. In other words it doesn't matter where you invest, as the forward rate offsets the interest rate differential. For the carry trade to work, this cannot be the case (higher interest currencies do not depreciate as much). In reality, spot will react asap (appreciate), so that later it can depreciate to restore equilibrium (parity).

The overshooting models were developed to explain the excess volatility puzzle. Since FX reacts asap but goods prices are delayed, the spot rate must overshoot its value in the short run. That said, FX forwards (any forward really) are not unbiased estimators of future Spot rates.

This PPT shows the mechanism of overshooting (in simply economics diagrams on slide 11/17). The picture is from FIGURE 4-12 of International Finance Theory and Policy 11th ed. by Krugman, Obstfeld and Melitz. If you ever get bored, I recommend this as a good and easy book for vacation or a weekend. It's 400+ pages but like any introductory economics book full of figures and limited in math.

I did not include any references as this was written on my cell phone. However, if you simple Google the buzz words you will find lots of material concerning the concepts mentioned above. Even Wikipedia will get you quite far.

The lack of proper models may potentially be a reason why technical analysis is frequently used in FX, although I never understood the reason anyone would look at chart patterns.

Not the answer you're looking for? Browse other questions tagged fx trading economics financial-markets macro-economics or ask your own question.