Implied volatilities for different options that track the same stock

I have a somewhat basic question regarding option prices.

Suppose we have an underlying stock and two different options (that have different strike prices, maturities, etc.) that track this stock. What factors can cause these options to have different implied volatilities?

What are some other factors?

Implied vol is a way of turning an option price into a comparable number (its annualized for example). The theory to construct vol is based on the world of Black Scholes (its assumptions). That holds for all sorts of markets. If you construct vol surfaces from equity markets (predominantly American and price quoted), one usually de-Americanises the option before building a vol surface. Many OTC markets (e.g. rates, FX) mostly quote directly in IVOL.

Traders use different vols to price options (on stocks) where returns tend to move differently than the normal distribution suggests, to more accurately represent the stocks movement.

FX is the "cleanest" way volatilities are quoted in my opinion. The quotes come as ATM DNS (delta neutral straddle), RR (Risk Reversals) and BF (Butterflies). The screenshots below will ignore quite a few technicalities; ATMD will not be 50D as the stylized example suggests, and is be explained here. IVOL itself affects the value of delta and many fx pairs are quoted as delta premium included. BF itself can be quoted differently.

Using a somewhat simplified method from Malz, one can quickly demonstrate this with a few lines of code in Julia.

Black Scholes looks like this (RR and BF set to 0). 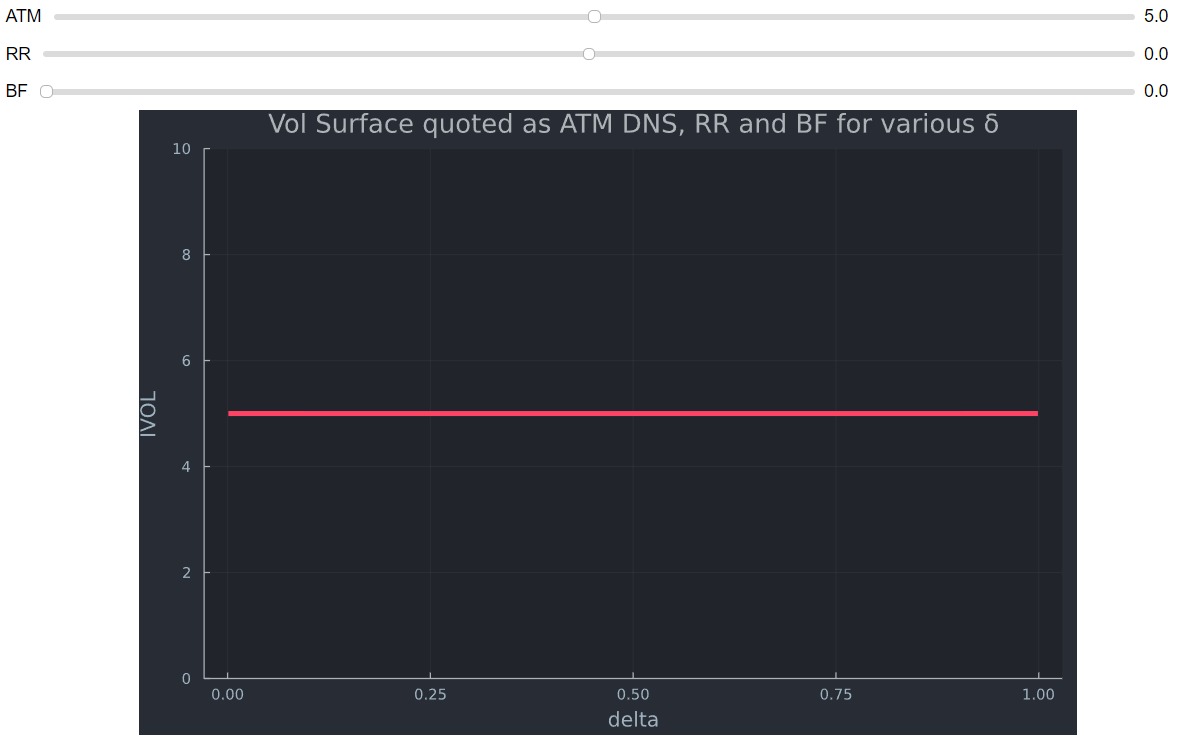 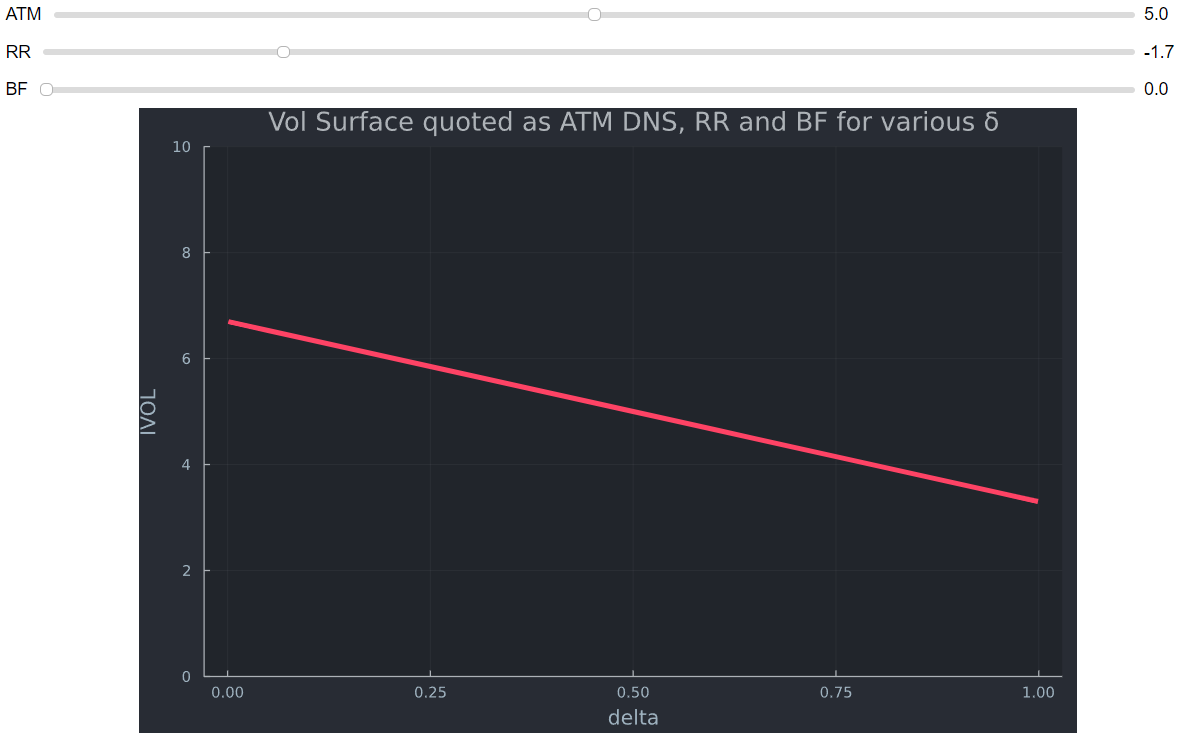 A 25D BF is quoted as $BF_{25D}=((C+P))/2-ATM $ in vol quotation. If the average of Call and Put vols is higher than ATM (smaller is very rare), you account for kurtosis (fatter tails on both sides). I set RR to zero for convenience here. 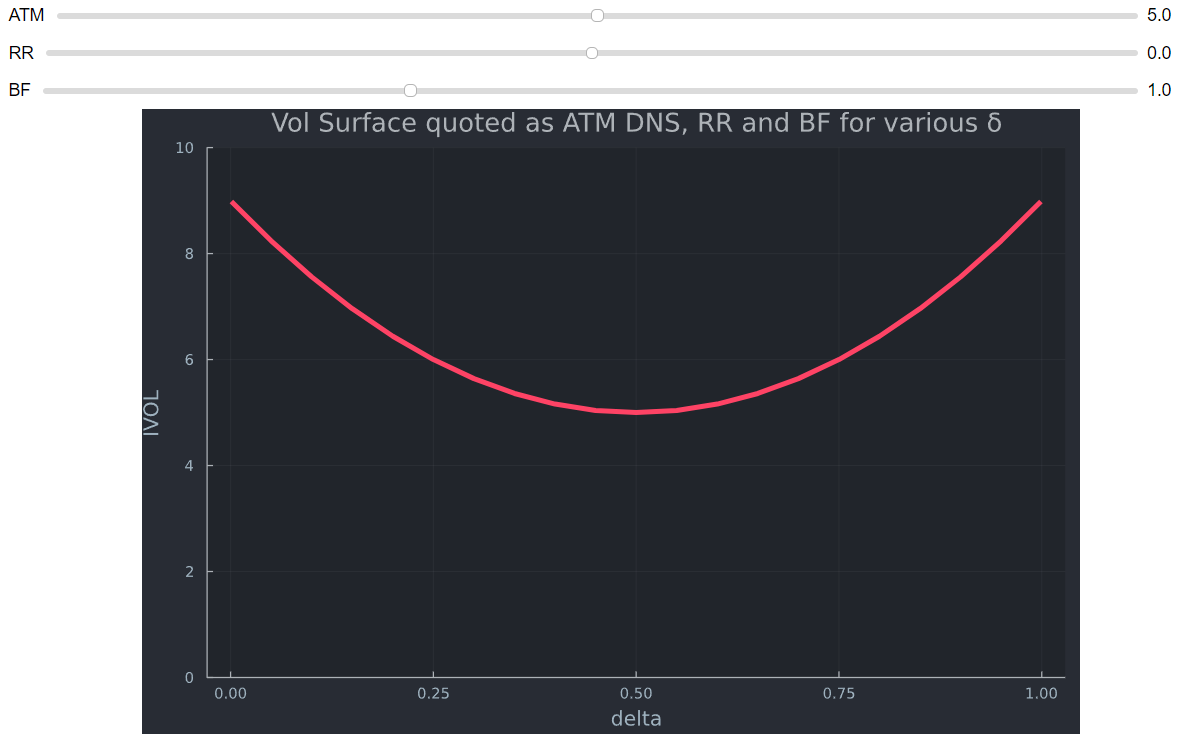 Putting it all together creates the VOL surface. 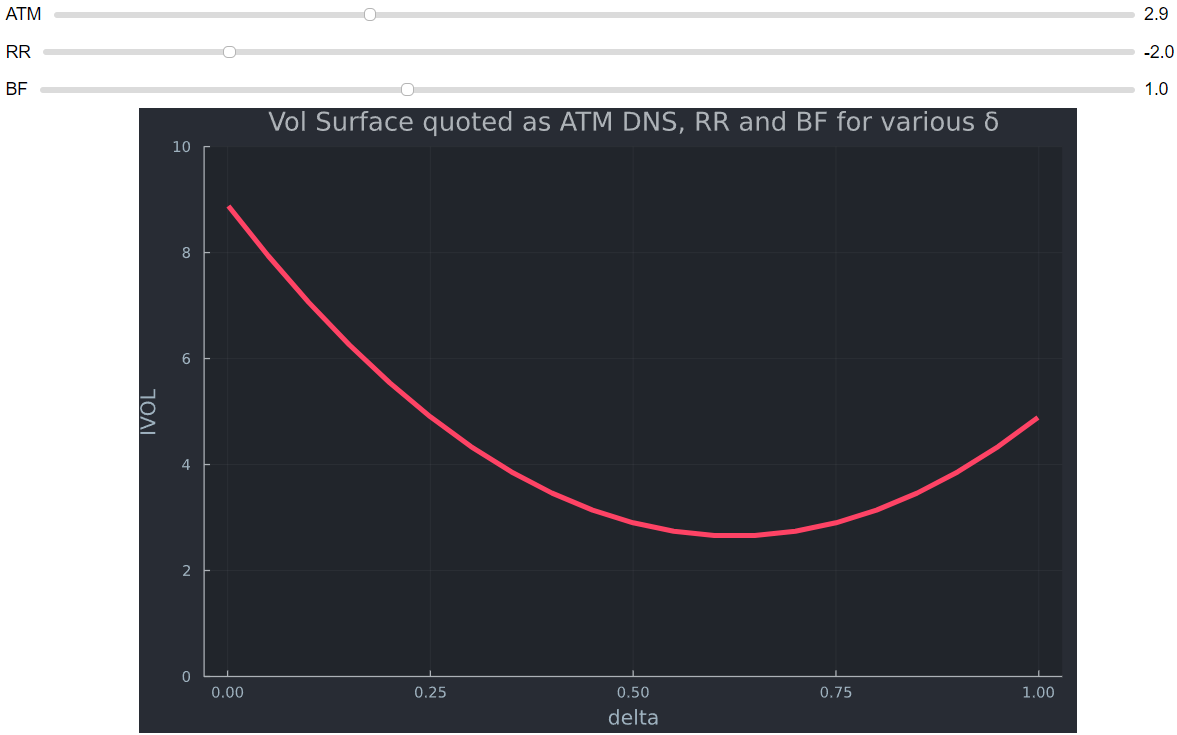 Hence, the vol surface exists mainly because there are fat tails, skewness, heteroscedasticity, jumps (crashes), and so forth. None of these real world phenomena are featured in the Black Scholes formula. The market just developed ways to account for many of the shortcomings of Black Scholes.

All these factors (as well as supply and demand) increase the market price of OTM puts (and calls, depending a bit on markets though) and therefore translates into higher implied volatilities.

Maturity is the "cousin" of volatility, it is almost everything. Other item to think about include is it an American or European exercise? But its all about volatility and time, all else being equal.

The causes are simply the market feeling and the way options are used in the market, and nothing more than just supply and demand.

For example, it is usually assumed that low-strike options are more expensive (have a higher implied volatility) than those with higher strikes. The reason is that many big players in the market use out-of-the-money puts to hedge against big drops in the market. In other words, many people willing to buy OTM puts push their prices higher and that translates into higher implied volatilities (note that the volatilities quoted by the market are just a way of quoting the prices of the options).

Something similar could be claimed for different maturities, usually the shorter term ones are traded with a higher volume than long-term ones and therefore the difference in price (and therefore volatility).

1
Effect of Implied volatility on option delta
3
Is “at the money” referent to the spot or forward price?