How do I reproduce the cross-sectional regression in "Intraday Patterns in the Cross-section of Stock Returns"?

Recently I was trying to reproduce the results of "Intraday Patterns in the Cross-section of Stock Returns" (published in the Journal of Finance 2010). The authors used cross-sectional regression to determine which intraday lags have predictive power.

From my understanding when doing cross-sectional regression all variables have to be from the same time period. For example, I can take the one day returns of all stocks and regress them against the number of employees in each company.

The following is a short description of how cross-sectional regression was used in the research:

If I understood well, the returns of one period were regressed against the returns of another period and a slope was obtained from each regression. Later, autocorrelation analysis has been done on the slopes.

Unless my thoughts are wrong, I don't see the point of regressing the returns of one period against another - $R^2$ values are close to zero. Here is an example: 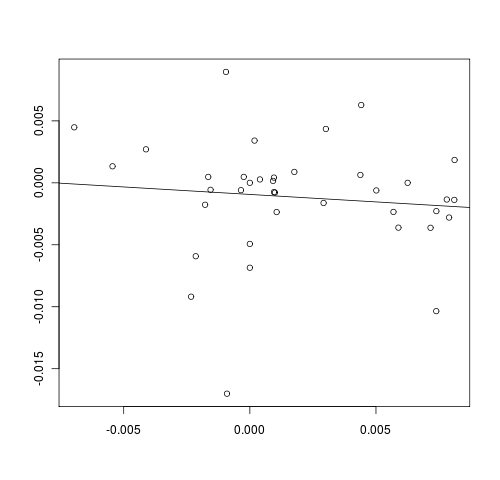 Did I get the cross-sectional regression wrong? By the way, I was working with a relatively small number of stocks, but I thought that 38 should be enough.

The $R^2$s are usually close to zero for single stock regressions. The big $R^2$s that a lot of asset pricing research shows is by forming portfolios. Forming portfolios cancels a lot of the idiosyncratic returns, which has a smoothing effect.

The $R^2$s should be low here, although I don't see any in the paper for you to compare. This probably means they are very low. We don't expect that the lagged 30-min return should predict much of the future 30-min return. Maybe one percent or two? Heston et al's point is that they are correlated. We can't expect that the lagged return will tell us exactly the future return (i.e., $R^2 = 100\%$), but the two are correlated.

They run the regression $$r_{i,t} = \alpha_{k,t} + \gamma_{k,t} r_{i,t-k} + u_{i,t}$$ which finds the autocorrelation between $r_{i,t}$ and its $k^{th}$ lag $r_{i,t-k}$. This seems endogenous to me because there's an omitted variable that drives both the return and it's lag (maybe some news?). This should bias their $\gamma$, but I don't know a priori which way. When Jegadeesh (1990) looked at short-term reversals he did some other tricks to get around it, but I don't see that here. Heston et al are very well respected, so there's likely something I'm missing and I'm not very familiar with the intr-day literature, although I didn't see any discussion of this in the paper. I am interested to see this in it's peer-reviewed and published form.

Regardless, their $\gamma$s aren't autocorrelated, so they should be fine using the Fama-MacBeth approach. Oh, and that you're only doing 38 stocks shouldn't affect your $R^2$, just the t-statistics on your $\gamma$s.

Not the answer you're looking for? Browse other questions tagged equities research statistics regression theory or ask your own question.

2
Which studies should be replicated?

3
Any one know how to implement the Heston and Rouwenhorst country-sector effects regression in R?
18
Testing Valuation, Size and Momentum (proprietary factors) from 1988-2013: No evidence of driving cross-sectional returns
6
Testing the validity of a factor model for stock returns
10
What are the econometric assumptions in the Fama-Macbeth procedure (1973)?
2
Regression of TAQ half-hourly stock volume data against news volume
8
Using cross-sectional factor model (BARRA type) returns in a time series factor model (Fama-French type)?
1
Cross sectional regression for monthly retuns wih time lag