Most complete list of investment mistakes in stock markets

I'm looking for a (hopefully exhaustive or at least extensive) list of behavioral biases that are currently observable in the stock market. I'm well aware and replicated some of the evergreens such as underdiversification and disposition effect that are well known for quite some time- what i'm looking for are some more recently discovered biases.

Does anyone know (ideally) some research papers that might point to newer biases such as preferences for stochastically dominated alternatives, alphabetical-ordering preferences (ABC-stock puzzle), or full-sale bias (bang-bang strategies such as mentioned by Christian Gollier) etc. pp. including a methodological description and perhaps estimates on the significance, economical and statistical effects and pricing impact?

I'm grateful for any hints :-)

equities asset-pricing behavioral-finance
Share
Improve this question
asked May 16 at 9:27 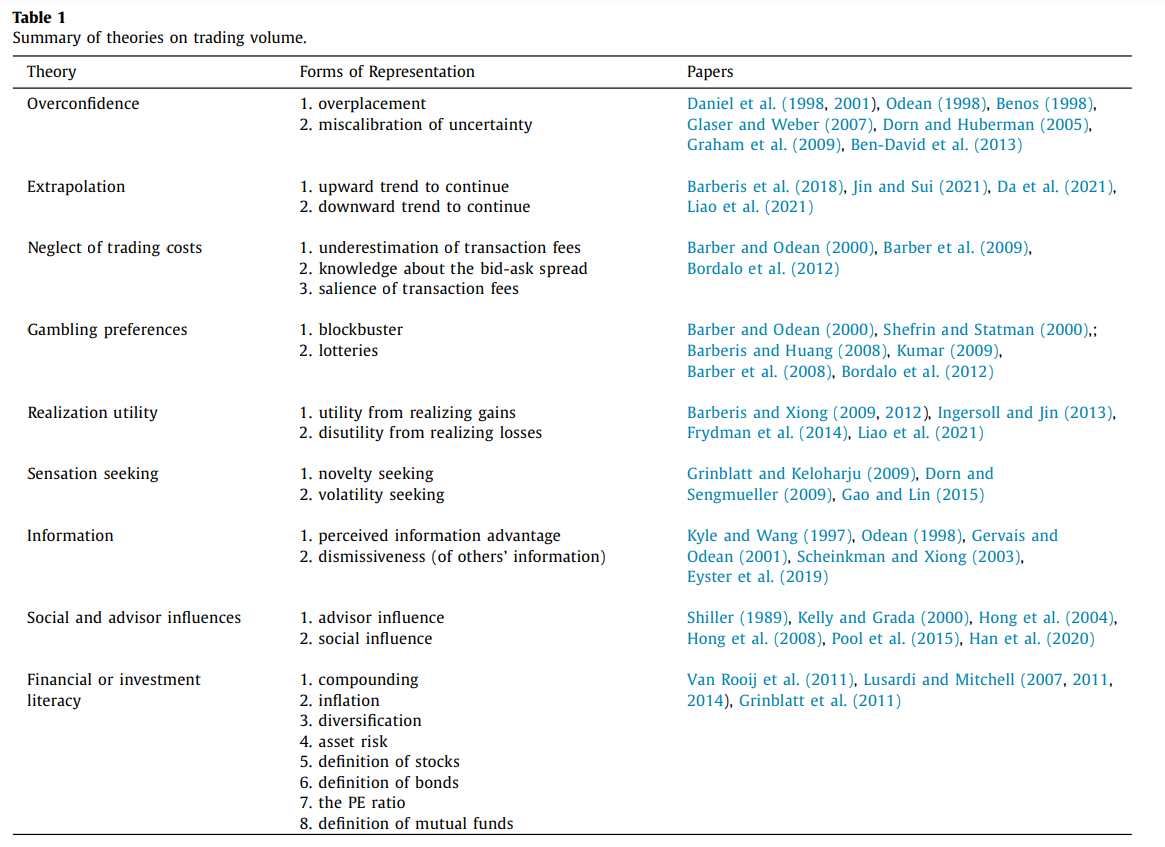 Hirshleifer (2015, ARFE) provides a great review of the literature on behavioural finance.

First, let me say that barring another post, Kevin should get accepted as the answer, but I wanted to add a class of biases that are in the literature, but not in the social science literature. In other words, this is known, but unknown to economists.

As a background, I have been making the technical argument that there are three types of errors of mathematics in the financial economics literature. Two of those errors are applying perfectly good math inappropriately.

As an example, imagine that you and your billionaire friend just learned Euclidean geometry. Your favorite part has always been the parallel lines postulate, while your friend is in love with the Side-Angle-Side Theorem. In order to test Euclid's ideas and prove them correct, you both decide to walk along parallel lines and measure your distance apart at the end of the trek. You need a billionaire friend in order to waste the required amount of money to do this.

To be certain you are doing it correctly, you both go to the equator. You stand on the prime meridian and your friend stands at ninety degrees longitude. You both stand facing North.

You begin your trek traveling perpendicular to the equator and, unexpectedly, both arrive at the North Pole, on parallel lines that intersect and you create a 270-degree triangle where any two sides are parallel lines.

Finance creates the same type of mistake by violating the converse of the Dutch Book Theorem.

Ito calculus assumes that all parameters are known. Of course, they are not. That is where the problem arises. Theoretical and empirical finance is a Frequentist discipline. On the surface, there is nothing wrong with that, as long as the work remains theoretical and is never applied to any real-world problem.

This bias might be called an expert bias because only an expert can cause this bias. An amateur could not possibly cause this to happen. It is a bias due to training alone. There have been empirical warnings since 1963 to abandon the math used in finance, but nobody will stop doing it.

The original article by Black and Scholes that sets up options pricing modeling from that time forward has a paragraph just before the end that states the authors tested the method empirically and it didn't work. Indeed, it has never passed a validation test. Whole conferences are held on the anomalies of the model.

There are three difficulties involved with substituting estimates for known values and the article I am about to cite involves one of them. This is a well-known problem in the probability and mathematical literature. It has to do with the rules of probability math at a level deeper on which an economist would ever be trained. So it never appears in social science training. Ironically, it is important in the field of philosophy. There are philosophers as well as mathematicians and probabilists writing on this topic. The one place it would be vital, finance, has been almost dead silent ever since Markowitz published. It used to be part of economics. Indeed, one Nobel prize winner wrote about it.

So here is the problem, it will not look like a problem, which is also part of the problem.

In the end, it simply allows the person creating a model to cut a cumulative density function into infinitely many slices, including slices that are not atomic. They can be arbitrarily small. Economists love taking things to infinity or zero.

This basically states that you cannot have non-atomic slices. You cannot get arbitrarily small. You can get fiendishly small, but you must remain atomic.

Well, unless you have an infinite number of customers, not model as if there were, only if there actually are, then there is no difficulty created by using Kolmogorov's axioms. However, for any finite number of participants, Frequentist probability distributions give rise to sure losses if you know how to make them happen.

This is not a secret. Leonard Jimmie Savage coauthored a book on this before Black-Scholes and the finalizing of the various CAPMs and the APT. This is a form of herd behavior. Everybody knows that something does not work, but does not stop doing it.

The article is written in a style similar to Calculus the Easy Way. There are pictures but no formal math. There is a field of probability, philosophy and math dedicated to this problem already. This article is similar to a proof of concept. It is intended to show a specific pathology, but it is not the exclusive set of pathologies. I have found five of them that happen in empirical finance.

This bias is similar to physicists continuing to use luminiferous ether long after the Michelson and Morely experiments proved that it could not exist. It is also similar to the physicians that rejected germ theory despite the evidence. It is a specific kind of bias. I bring it up because bias is not just for amateurs. It took professionals to crash the Space Shuttle, twice, in preventable accidents.

The article is here. It is on the Internet Archive because the blog site was bought out by another firm.

This article from CXO Advisory Group gives a good overview:

I'll post another answer here for completeness and to collect all answers and my own research here as a kind of summary.

20220517: First list plus sources (apart from those in previous answers) 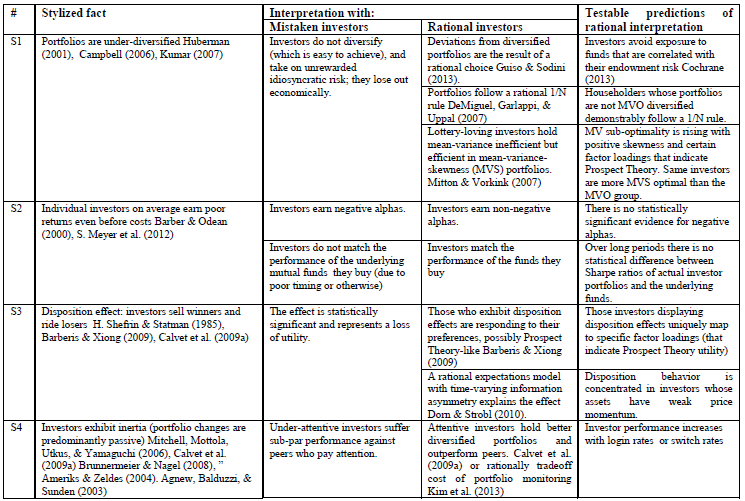 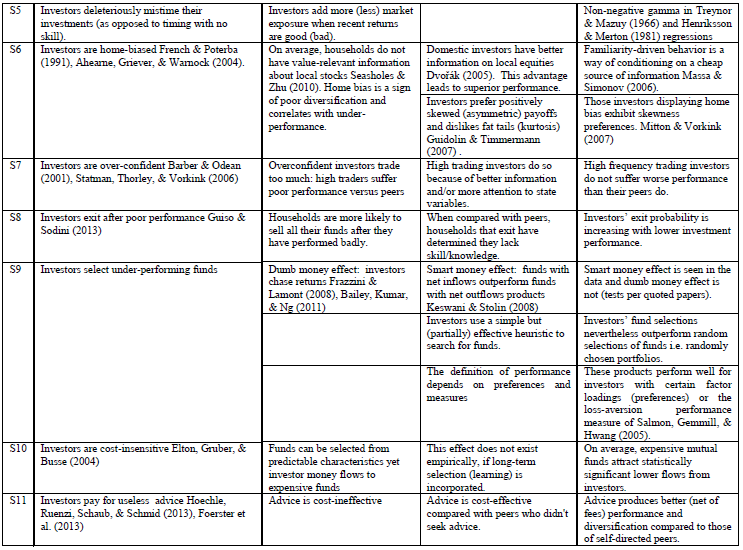 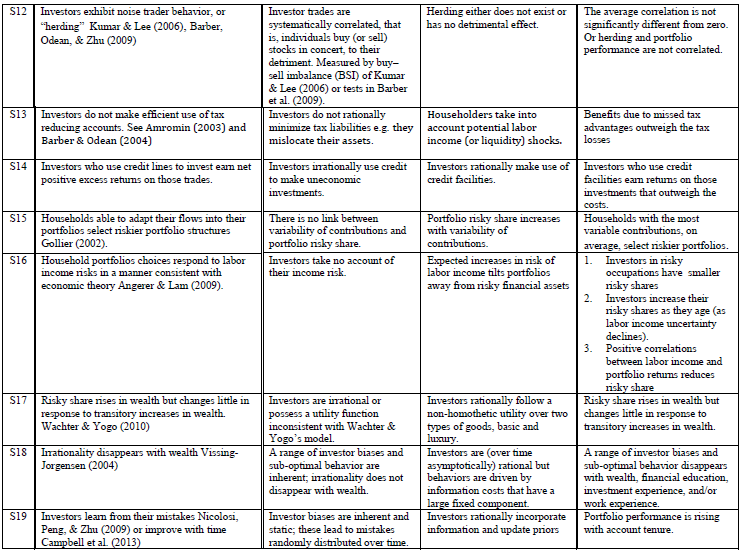 Here is another table: 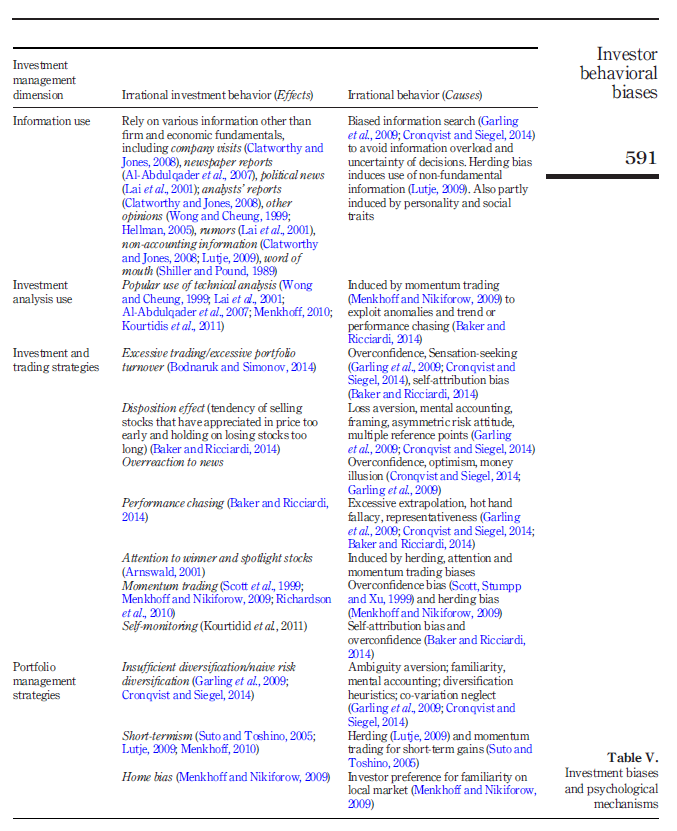 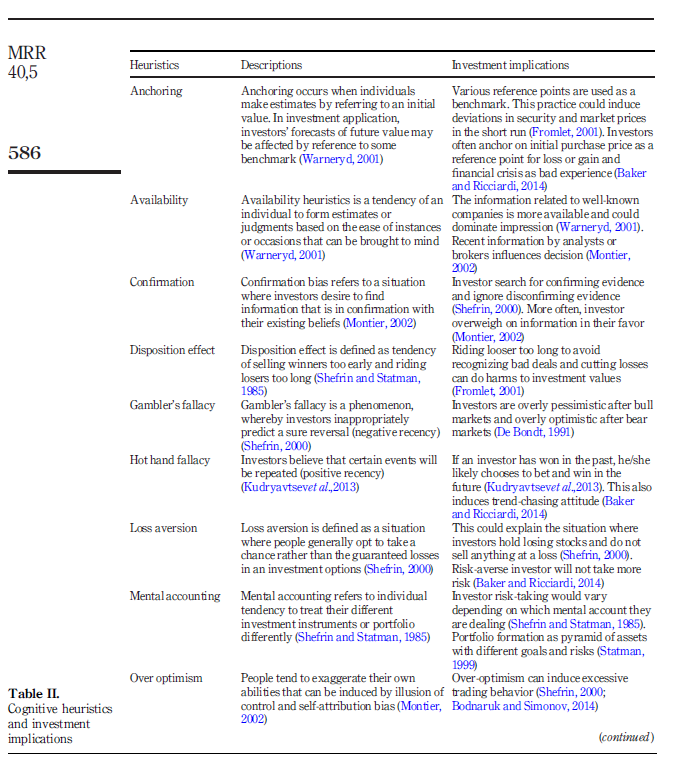 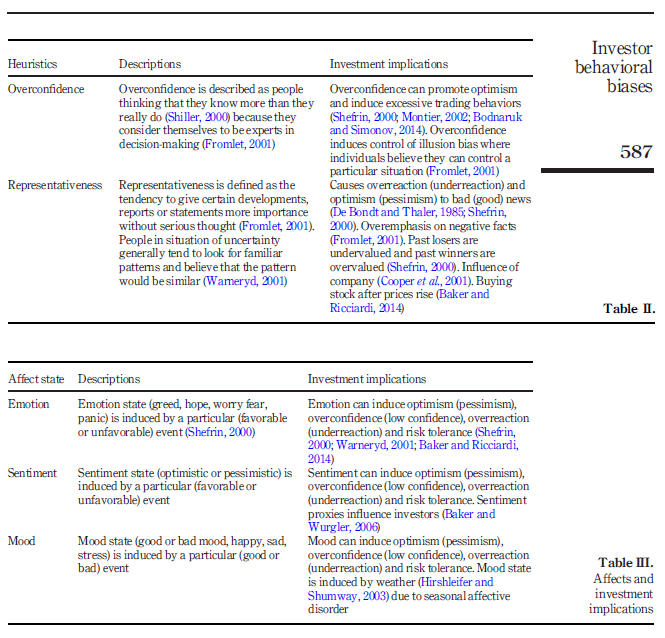 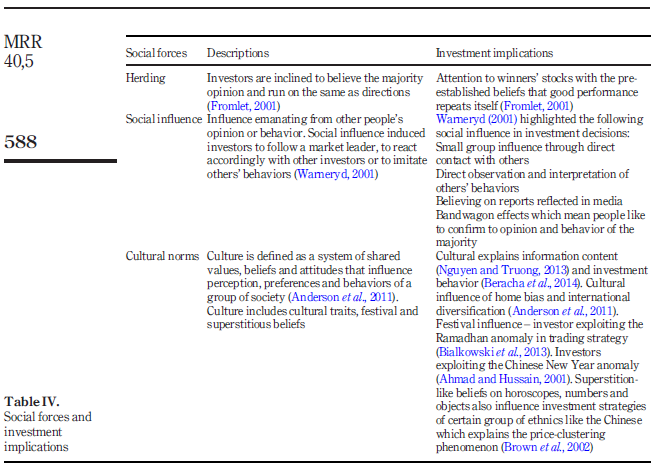 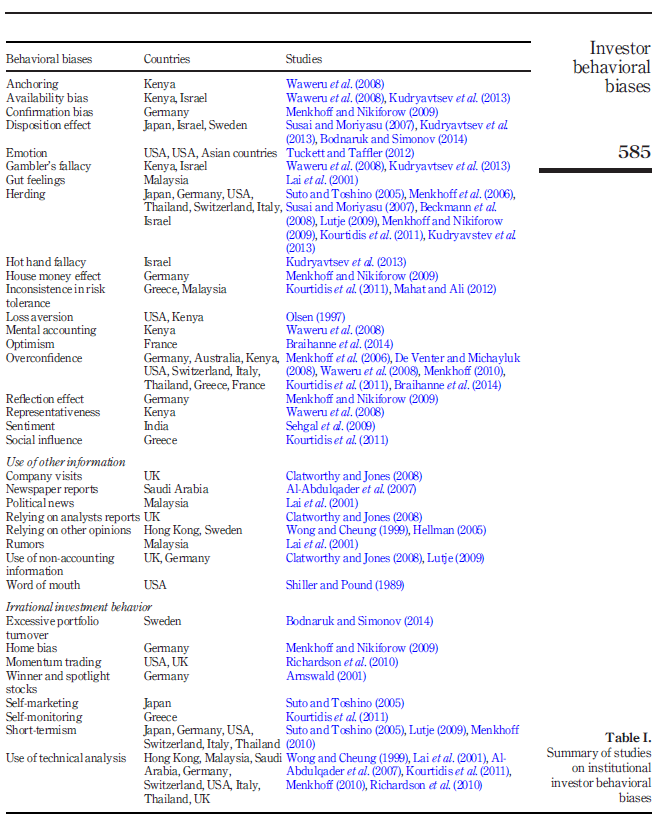 Not the answer you're looking for? Browse other questions tagged equities asset-pricing behavioral-finance or ask your own question.

0
Downloading most recent stock prices
0
Price of a Stock: What is it?
1
Estimating French and Fama 3 - factors for global markets
0
Dollar/time weighted rate of return of Stock Investment
1
Replicating Portfolio / Complete Market / Attainable Claim
5
Show a model is complete but not free of arbitrage