I've see a couple of places where a FX rate, denoted $X$, such as EURUSD (quoted as "the number of USD needed to buy 1 EUR") is modeled with a diffusion process / Geometric Brownian Motion as follows through its "rate of change":

where $r_d$ and $r_f$ denote the (deterministic) short rate for the domestic (USD) and foreign (EUR) currency. One could also model the same dynamics by multiplying by $X_t$.

My question is related to the drift quotient $r_d(t)-r_f(t)$: Why is it not $r_f(t)-r_d(t)$? We have just seen that the FED (US Cental Bank) hiked interest rate (meaning $r_d$ increased). The market response was that EURUSD decreased ($X$). [This post]The relation between exchange rate SDE and respective interest rates asks more or less the same question but it does not answer why we cannot model it the other way around - or at least why we should not do so.

I am answering now instead of commenting. The rate of change in FX is naturally forward looking in this case.

What you confuse is what happened to Spot due to changes in interest rate environments relative to what is expected based on no arbitrage arguments. The recent FED hikes ($r_d$ increases) and the EURUSD declining (X went from approx. 1.2 to 1.07) already happened and has nothing to do with this model. Note that this is in fact an appreciation of the USD.

Any news (changes in market data) will be priced in instantaneously. If higher interest rates in the US relative to the EUR make USD investments more attractive, you can expect an appreciation in the USD. However, that already happened (as soon as rates changed).

The above refers to given market data (spot and rates are known). That is also how FX forwards are priced, and shown in the wikipedia article about covered interest rate parity that I referenced in a comment. 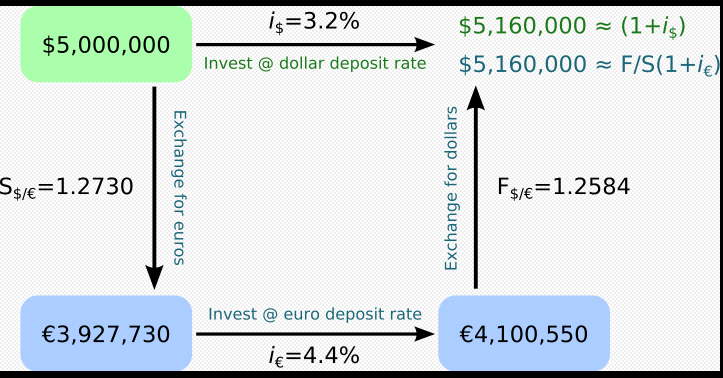 In terms of expected spot ($E(S)$), the story is more nuanced. The so called uncovered interest rate parity is defined like this:

In other words, you need more USD per EUR - the USD depreciated, EUR appreciated. That said, there exists a widely used strategy called the "carry trade". For the carry trade to work, this cannot be the case (higher interest currencies do not depreciate as much, on average). It is a successful strategy, but very risky because there is a tendency for this depreciation to actually happen - often rapidly during terms of crises. That is why there is the saying that with a carry trade you walk up the stairs (small steady returns) and go down the escalator (large sudden losses). If you wonder why this relationship makes sense, it is mainly due to differences in inflation rates. The image below is from FRED using FredApi in Julia. 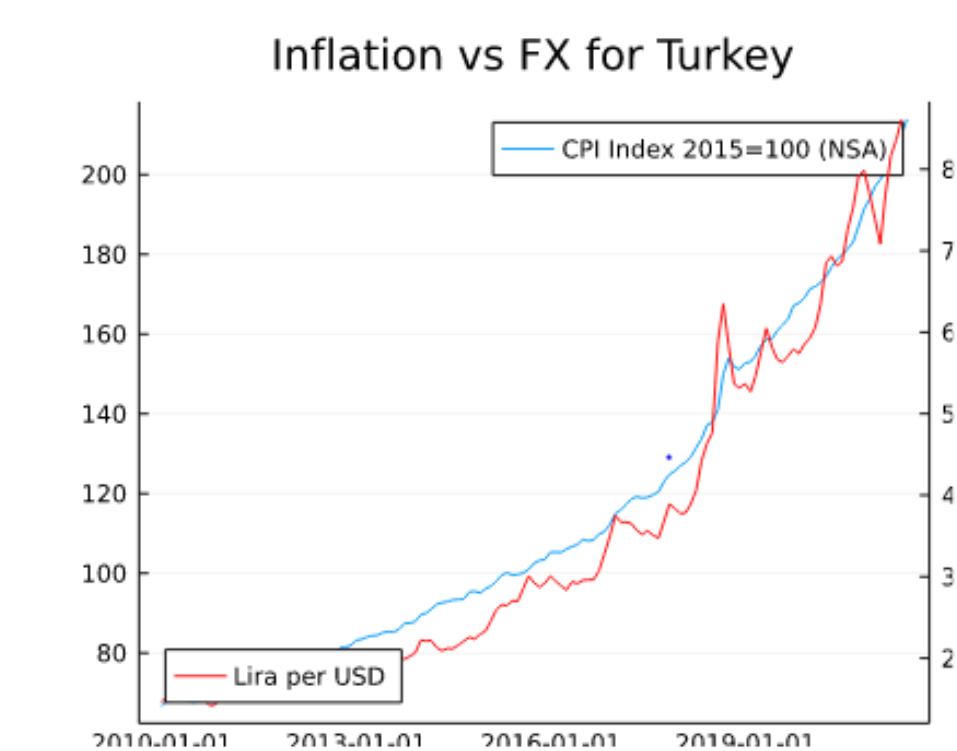 Turkey has a higher interest than the US (currently 14%) but still, the Lira depreciates steadily against the USD. The reason is higher inflation.

Empirically, FX is also more volatile than this relationship suggests, which is why "overshooting models" were developed. These are part of the stock approach to FX modelling and consist of flexible and sticky price monetary models which combine capital markets, goods markets and money markets. Sticky price monetary models are also known as overshooting models, initially designed by Dornbusch (1976).

In terms of forecasting (what might to be your ultimate goal?), neither of these models perform well or can be used. Kenneth Rogoff and Richard Meese received an incredulous reaction to their now-famous paper showing that random-walk (RW) forecasts outperform economic models of exchange rates. Reactions were along the line of “You just cannot possibly have done it right” or "the results are obviously garbage". Turned out they were correct. Rogoff makes an interesting point in some later paper. If money supplies are hard to predict, then one should not blame the models if exchange rates are hard to predict. It is unforeseen news that matters. However, as Rogoff further stated, their finding was even more extreme. They tested predicting the exchange rate in one year, given the information about what money supplies, interest rates, and outputs are going to be in one year. However, even in this case, no economic model beat(s) the RW.

The use of the SDE is mainly for option pricing. These models should be internally consistent, to the extent that the covered interest parity should also hold. That is why usually many pricing engines (e.g Bloomberg) imply one of the 4 inputs (spot, forward, two rates), by default the least liquid interest rate.

This also answers why it cannot be modelled the other way around, because it would create arbitrage opportunities.

Here is a way to demonstrate the logic of standard FX rate models. The key takeaway is that these models assume that uncovered interest parity (UIP) holds but still imply that a US rate hike leads to dollar appreciation. This is confusing to many since it would appear that UIP would rather predict USD depreciation.

It is a statement about the expected FX rate change. The well-known logic is that risk neutral investors must be indifferent between investing in the two currencies so lower rates are compensated by expected appreciation. This has the forward solution.

Note that the sign of the interest rate differential gets reversed.

Now an increase in US interest rates leads to a jump in the integral term and hence to an immediate dollar appreciation (smaller $s_t$). However, by the first equation it implies that $\mathbb{E}_t[ds(t)]$, decreases and hence the dollar is from that point on expected to depreciate.

The logic is that in order for USD to be expected to depreciate after the rate hike and still return to some long run value, it must initially appreciate so the initial reaction goes against the UIP prediction. The Dornbusch model adds an additional twist as the shocks change the long-run exchange rate but the logic is still the same.

Not the answer you're looking for? Browse other questions tagged interest-rates fx sde exchange geometric-brownian or ask your own question.

13
How do I eliminate developed currency funding cross rate risk in an EMFX position?
7
compute time from FX forward, how use DEPO rates?
1
When calculating CIP between EU and US, which interest rates data to use?
0
can an fx forward price simply be divided into 1 to quote the inverse?
4
The relation between exchange rate SDE and respective interest rates
3
FX Option Pricing Under Basis Adjustment
11
Pricing of a Foreign Exchange Vanilla Option
1
Covered Interest Rate Parity with FX Spot-Adjustment