How do Order Management/Matching Systems match/allocate orders (and filled prices)?

I am working on an improvement of my company's order allocation system. We run a central Order Management System (OMS) but currently performance attribution from filled orders leaves room for improvement.

I look to understand how other systems handle order and trade allocation.

One example how a trade could be defined is as follows:

To compute performance of individual trades (not total performance as that is trivial) would you apply a FIFO-like approach or allocate filled shares and their filled price in a different way? The reason I attempt to break it down is for various reasons, among others TCA and to better analyze algorithm predictive power in detail.

Can you please share how you would approach this issue and if you know what you believe industry standard is? I want to have a better understanding before having it all spec'ed up and implemented by developers.

To avoid confusion, my question is not at all related to order matching on the exchange/ecn side, but fill allocation and trade performance attribution on the liquidity taking side.

Approaches like FIFO and LIFO are most useful for tax accounting. If you don't have a tax accounting reason to do them, I'd recommend avoiding them, as they don't reflect actual realized gains (it's very rare for a position accounting system to move cash in and out of your account based on FIFO or LIFO).

I'm going to discuss everything here in Gross of Fees terms, since Net of Fees complicates the discussion a bit.

You realize gains when your position gets closer to zero/flat. The average cost of that position does not change. Your realized gain or loss is the difference between this "closing" transaction value and the average cost.

Now, how to discuss trades? I think there are two practices that are rational and widely used in this space.

The other approach is to count every transaction that reduces the position (moves it closer to zero/flat) as a "trade". This allows you to report the realized P&L from that "trade" as well as track other statistics like time in market, excursion, drawdown, etc.

The third approach that I'll discuss is very algorithm specific, and widely used but not exactly generic. If your algo can tag transactions as opening or closing fills, then you can do average cost accounting and use either the flat to flat or position-reducing methods described above on 'logical' rather than 'physical' positions and "trades". I think that this is some of the rationale behind things like LIFO and FIFO: trying to logically group transactions into "trades". I think that actually having the algo tag the fills and declare whether the transaction should be considered an opening or closing transaction avoids the subjective and arbitrary approaches provided by FIFO and LIFO, letting the intent of the algorithm control the definition.

I'll add my own experience here based on what we do at our firm, simply to provide more support for what Brian said in his answer.

Fills that move a position further away from 0 contribute to the average price of the position.

Fills that move a position closer to 0 "book profits" against the average price of the position to that point in time.

Any fill that causes a position to cross 0 must be handled so that it hits 0 first, and then crosses to the other side to ensure proper accounting.

From your example, what you refer to as "trades" we call fills. The "trade" is the entire sequence of events that encompass moving from net position size of 0 and back again.

t1 is the open time of the trade. t4 is the closing time of the trade. The trade is made up of 4 total fills, 2 of which are "opening" fills and 2 are "closing" fills. A fill is an opening fill if it moves net size farther from 0. It is a closing fill if it moves net size closer to 0. Any time you reach 0 (or cross it) you close the trade and, in the case of crossing 0, start a new one. When I refer to "crossing 0" it is because we model long positions as positive size and short positions as negative size.

Here is a suggestion for performance analysis. It visualizes the quality of individual decisions, taken by the trading strategy. For simplicity purposes lets consider only BUY trades (the SELL trades may be multiplied by -1). Define reasonable trading horizon. Organize all trades in the same graph where:

Optionally, multiply each timeseries by corresponding trade's size. In this case the timeseries represents each trade's P&L. 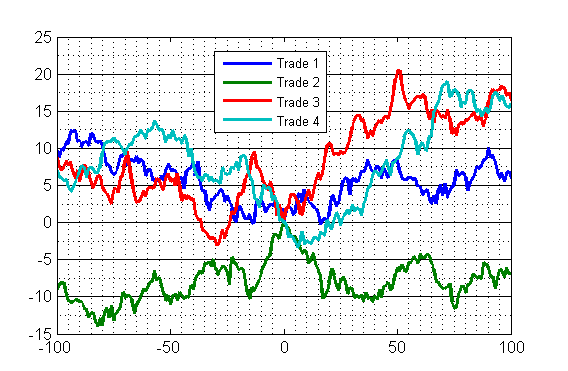 Such view may provide very important insights about the strategy in addition to total performance. For example, you may observe that only a few trades contribute to total performance while the rest are "noise" trades. Then you can study what distinguishes these "special" decisions. Also, different effect like slippage can be easily observed and measured. You can also add a line that represents the average response. However, this method has its drawbacks, for instance, it doesn't account the position, but only the quality of individual decisions.

Not the answer you're looking for? Browse other questions tagged order-handling performanceanalytics order allocation or ask your own question.