I'm looking for an indicator which tells me if it's a good time to use mean reverting type quantitative trading strategies. In order to do so I look at the market (the few hundred stocks I trade) and try to build a measure with previous prices, volumes etc. It's seems difficult to have a multivariate model based approach because of the large number of stocks. Do you have any idea on were to begin? As usual it would have to react fast to market changes but not too fast to be discriminative in terms of transaction costs.

I think of mean reversion as more of a single stock phenomenon. In aggregate, these ididosyncratic mean reversions should offset one another and make the market smoother than its component stocks.

There is a lot of work on mean reversion at the single stock level. The best entry is Jegadeesh's 1990 paper on what became known as "short run reversal" -- the tendency for winners one month to become losers the next. Also, Bali, Cakici, and Whitelaw have a 2010 paper on a similar idea -- stocks with the biggest one-day return in one month have low returns the next.

There's a lot of research during the two decades in between, but these -- even if you only read the intros -- should help you ask yourself the right questions.

The issue for any technique is, does it consistently work as expected in the future? If not, then it's worthless.

The idea behind mean reversion is that you have a "mean" that means something (it's not arbitrary), and a deviation from that mean that reverts in some consistent way. A pair trade is a common form of a "mean reversion" trade.

Below is a crude example of a "pair trade" where the NASDAQ is assumed to be garbage (needs shorting) while the S&P500 is worth holding (go long). This is essentially the position that chewed on Cliff Asness in 1999-2000 that I described in another thread.

Will the current spread get bigger or smaller? Who knows. As stated on that thread, quant funds (no one) can be "future neutral". When you take a position, any position, you're exposed to the future. 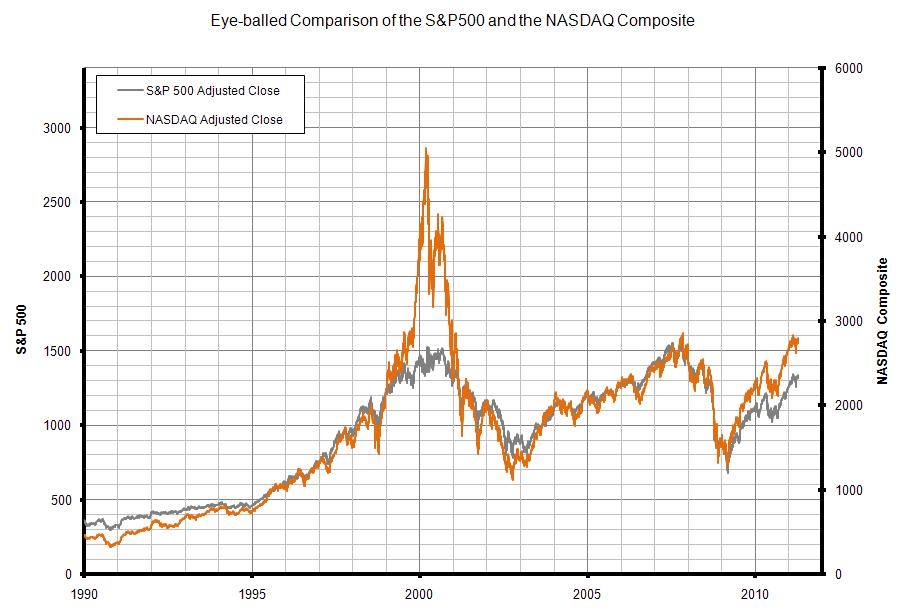 Here's a link to a .PPT file on pairs trading. Notice the conclusions on the last slide:

Here's an article describing mean reversion trades. Notice that he doesn't really have a conclusion:

Do enough digging and you'll find every opinion imaginable. I know that doesn't help, but that's reality.

This is tough but the below reference found a small edge with 3% R2 - mean reversion is more likely to happen in upward market while momentum is strong in downward market.

Not the answer you're looking for? Browse other questions tagged indicator mean or ask your own question.