One approach that I was going to explore was time series or sequential clustering followed by transition probability estimation.

Thank you for your time

market-microstructure estimation intraday
Share
Improve this question
edited May 4 '14 at 16:55

What is your objective? There are many approaches that can accomplish this in broad terms but whether it is sensible depends on your application.

For example if you are interested in intraday breaks in the levels process you can look at OLS with a priori indicator function breaks, or perhaps a univariate Kalman filter with a stochastic slope coefficient specified as a random walk process (or close to it, as long as it isn't explosive). You want a mean reverting element so, for the bid ask spread at least, you could do a stochastic vector error correction model where various parameters can be time-adjusting intraday according to polynomial kernels, since 2011 this is an active area of research. Each equation's dependent variable is the log-change in the bid and offer levels, respectively - look at Engle's writings in early 2000s for a static version which you will need to extend yourself to be time-varying. This is simple since by the assumption of a unit cointegrating vector we are able to estimate each equation with OLS, thus a Kalman Filter application is easy.

For volatility you could consider the GARCH family with the parameters as time-varying, or with dummy variables in the variance equation. For the non-parametric approach that you desire you could look at wavelet volatility which is varying intraday in both the time and frequency domains.

If you want to measure seasonality in the correlation dynamics there are various methods. If you sample data in bars and not at ticks (since numerical optimisation of MLE is extremely tedious for more than 2000 rows), you can use parametric or non-parametric stochastic copulas (non-Gaussian) such as the symmetrized Joe-Clayton copula. This presumes that both the intraday linear correlation and asymptotic tail correlations (as well as all quantile correlations over the reals) are time-varying. If you are primarily interested in correlation that is only sensitive to monotone relations, you can do an integral transform on this parameter and recover the time-varying kendall tau or spearman rho. Again for the non-parametric version there are various filters from signal processing to efficiently evaluate dynamic correlations, and you can also investigate time-dynamic wavelet phase-differencing through an inverse tangent transform of the real and imaginary coefficients as well as wavelet covariation - mostly if you are also interested in intraday frequency-domain shifts in the correlations.

For other approaches you should view the econophysics literature which is quite big in this kind of pattern mining.

But I struggle to see how this could be useful apart from an empirical/science perspective. Perhaps if you are liquidating, I can understand this analysis.

It could be useful for optimal trading to have accurate estimates of the intraday seasonalities.

Seasonalities come from a mix of:

From an estimation viewpoint, you see that the more you can take these effects into account (to be able to remove/add them), the better. 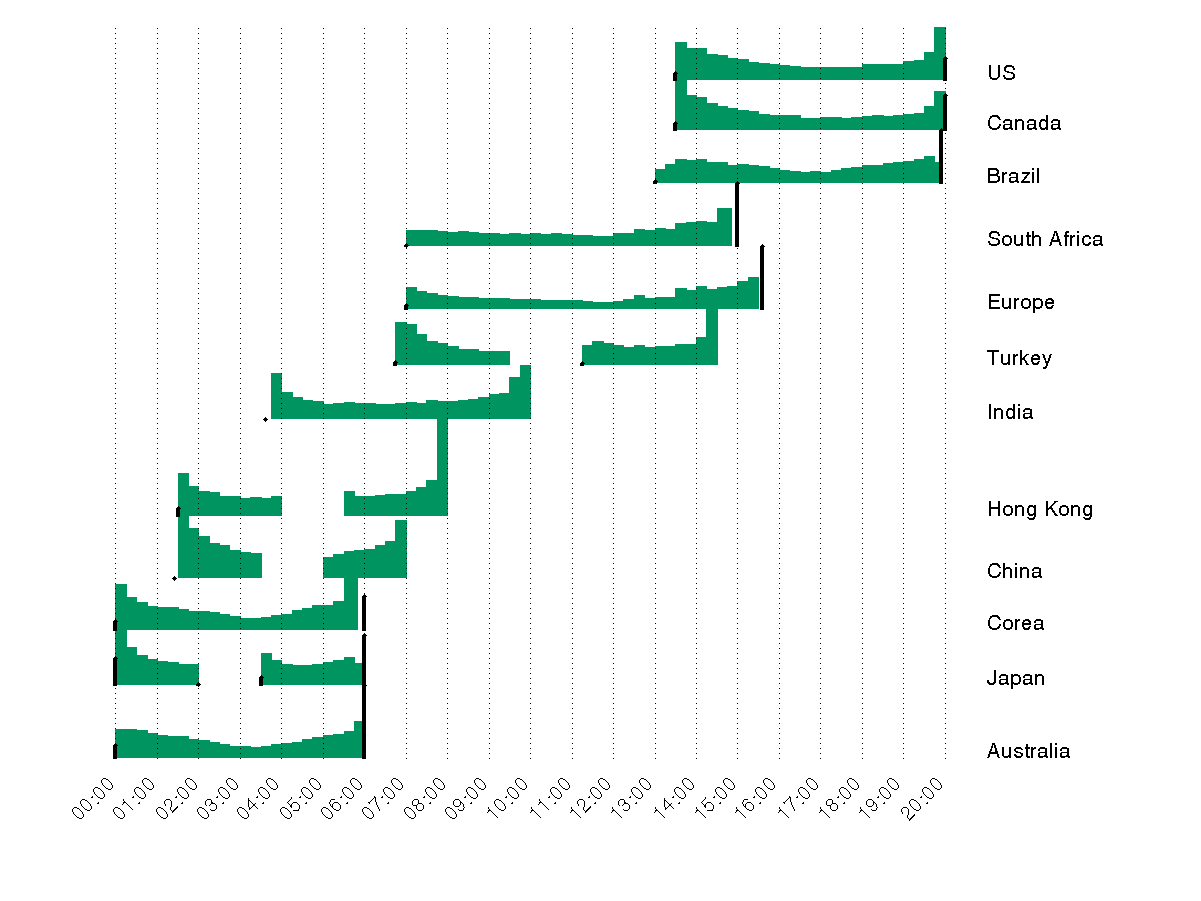 Just as an illustration, here is the worldwide volume seasonalities extracted from Market Microstructure in Practice (Part 2.1.2).

Not the answer you're looking for? Browse other questions tagged market-microstructure estimation intraday or ask your own question.