I'm looking to see if it's possible to programatically detect "measured moves" on candlestick data. The price data I am using is successfully retrieved from the TD Ameritrade platform using the unofficial Python API.

A very simplified image of the measured move trendline shape I'm looking to programmatically detect can be seen below:

An example of both upwards (green) and downwards (red) measured moves can be seen below on an Amazon chart using drawn trendlines (please ignore the 5 horizontal(ish) regression lines): 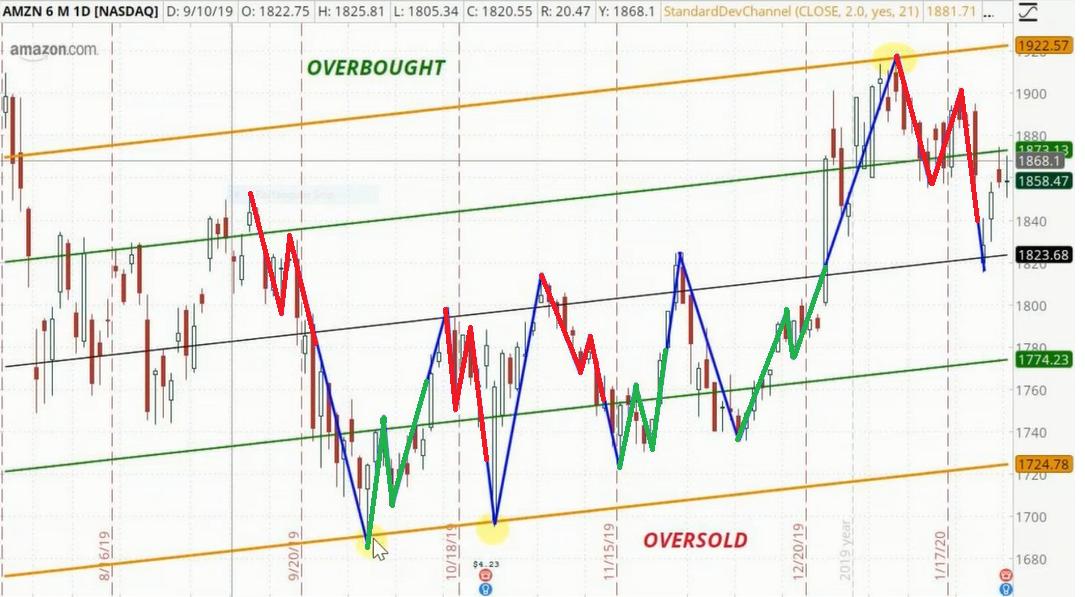 Q1. Is there a Python library that can detect these measured move?

Q2. If there is no library that can exclusively detect measured moves, could a library such as trendet (which detects trends in price data) be used in the following context:

then a downward measured move has been detected, for example?

Q3. Again if there is no library and trendet isn't viable, could something like the following logic work? For example,

then a "downwards measured move" has been detected? The issue here is the question of how many candles could be appropriate?

Q4. Could some pattern recognition to detect a triangular shape work? I guess another issue with this would stem from the fact that most of the triangles are rarely the same shame (which is evident in the second image).

If anyone has any knowledge they wouldn't mind sharing, or could point me in a direction where I can learn about some resources to help in detecting measured moves, I would really appreciate it.

You can use fractals to identify highs and lows. You can also measure movements as a percentage of the nearest extreme points. Here I showed how to find down fractals, and here I measured movements in percentages to detect a trend change. As for the triangle, you can apply the same fractals and connect them with lines (two upper, two lower). But, there is a subtle point here. For example, the lower fractals will be earlier than the upper ones and vice versa. Since the market is not homogeneous and different periods are needed to search for fractals.

I can only offer apriori solutions which are slightly overfit: