I am trying to model $C(K)$, the price of the call $C$ as a function of strike $K$. Because this is tied to Prob ITM - and in fact the probability density function of that particular expiration (https://quant.stackexchange.com/a/17650/20194) - skew and 'bi-modality' of the pdf become very relevant.

Has any work been done on using models that capture this skew (stochastic vol models) to model the PDF? Is there any insight into what we can roughly expect from $\frac{dC}{dK}$ using a modern options pricing model?

I am trying to recreate a pdf from options prices, but in markets where it exhibits extreme skew - what would be the best fit for a cdf/pdf to curve fit? I have asked another "statistics" version of this question here: https://stats.stackexchange.com/questions/242590/fitting-a-cdf-to-differentiate-symbolically?noredirect=1#comment461468_242590

I am really looking for a model function with parameters that I can fit my observed $C(K)$ so I can perform analytical derivatives from there.

Any review or guidance is much appreciated.

The way that I understand your question is that you are looking to fit the market prices of European plain vanilla options of a single maturity and then back out the corresponding implied probability density function. There are multiple ways that you could approach your problem.

The market prices of European plain vanilla calls have to be strictly decreasing and convex in the strike. One approach to fitting them that I like is due to Fengler (2009). He uses cubic smoothing splines and obtains a quadratic program that can be solved very efficiently. Given the piecewise polynomial representation of the option prices, you can easily compute the corresponding densities in closed-form using the usual relationship

where $\mathbb{Q}(K)$ is the implied probability density function at the strike $K$. Since the fit is very flexible, only ensuring the absence of arbitrage, the resulting density can also be bi-modal.

Alternatively, you could fit a parametric form $\sigma_{\text{IV}}(K)$ to the corresponding implied volatility smile and then use the relationship

However, many common parametrizations wouldn't be able to fit a bi-modal implied probability density. An alternative is to use a polynomial of degree $n$ in the implied volatility along the lines

where $k = \ln \left( K / F_0(T) \right)$ is the logarithmic moneyness. While this is a flexible parametrization for the near-the-money quotes, you would have to separately deal with the wings. If chosen properly, this has the advantage that i) you can fit very flexible shapes, ii) your calibration problem is linear and iii) you can relatively easily apply the above formula to compute the implied probability density in closed-form. However, it does not ensure that the resulting calibration is free of arbitrage. A very similar approach is to use thin plate splines. It has the same advantages/disadvantages.

If you end up choosing a parametric form for the implied volatility smile that you cannot analytically differentiate, then you could always resort to automatic differentiation libraries. These can help you take exact derivatives (as opposed to finite differences) of almost arbitrary functions.

Finally, you can directly fit the implied distribution. As you mention bi-modal probability densities, I assume you are interested in situations where a jump with a predictable time of occurrence is priced in (e.g. quarterly earning reports). Imagine your "normal" (as in - at all times except for the jump) logarithmic returns follow some Levy process $X$, i.e.

where $\gamma$ is some drift term (that you need to chose such that the stock price becomes a martingale). You can then augment these dynamics by a single predictable jump $Y$

Here $p$ is the probability of an up-jump and $\phi(x; \mu, \sigma)$ is the standard normal probability density function. The corresponding characteristic function can be computed in closed-form. Then you use e.g. the Fang and Osterlee (2008) COS method for pricing and calibrate your parameters to the market prices of European plain vanilla options. Finally, you can use the same method to compute the implied density of your calibrated model. The beauty of this approach is that you obtain very easy to interpret parameters.

Yet another possibility to fit the implied probability density directly is by using a Gram-Charlier series expansion of the normal distribution. The latter is directly parameterized in the higher moments and option prices can be computed very efficiently. A good reference is Schloegel (2013). 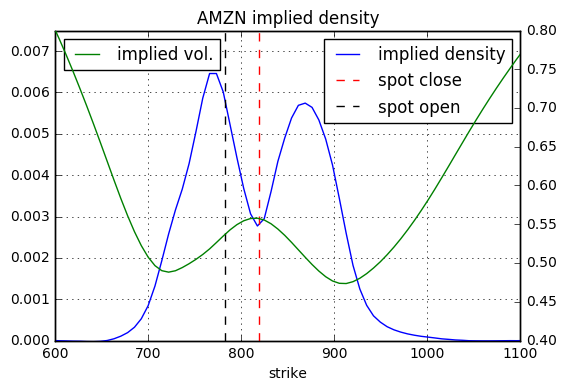 Not the answer you're looking for? Browse other questions tagged options probability stochastic-volatility heston density or ask your own question.

7
Volar Higher Order Parametrizations
4
What interpretation can I derive from an inverted volatility surface?
4
Alternative Method for Determining Option-Implied pdf
1
probability that the stock price is below the strike price
2
Bimodal option pricing based on P.D.F

0
Is the price of a binary call not monotonous with vol for OTM
0
Pricing a call when minimum stock price above strike with certainty
1
probability that the stock price is below the strike price
0
Price of call/put is convex in $K$ (strike price)
5
pricing using dupire local volatility model
3
Wrong proof that call price is concave function of strike price
1
Do all stochastic volatility models capture volatility smile?
3
What are "call and put walls" around a strike price, to kill off vega and prevent gamma?
0
Bachelier call option derivative w.r.t strike