What is the benefit of holding a short option?

I am new to corporate finance and I ask myself why an investor is interested in being short an option? He can only can win a premium but he can lose much more. I understand with being a short, I cap the profits on a stock like this: 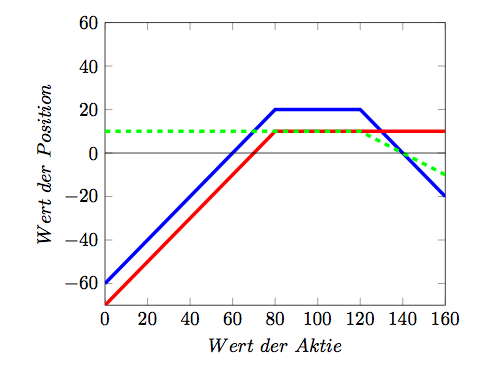 I think this is a quite theoretical case, right? I'd like to understand the possible benefits in practice.

Market makers, obviously, have to be willing to short an option. They will delta hedge their positions to limit risk.

As for investors, they can aim for a buy-write strategy to collect extra income in lieu of unlimited upside.

And lastly, someone who owns a stock he can't sell right away (such as an entrepreneur still under a vesting period after his firm has been acquired) can limit the price range by creating a collar. The income from selling the call will offset the cost of buying the put.

As a complement to chrisaycock's answer, I would also say that shorting options is useful when you want to create option strategies. Buying and shorting options on the same underlying with different strike prices allows the investor to create products with elaborate payoff which allows them to be more on a range of the underlying's price rather than on its direction.

I see a lot of complicated answers here to a very simple question. A real-world example of using short options is to simply sell puts in order to buy the underlying stock at discounted prices. If used in this manner, short puts are actually less risky than simply buying the stock outright and consequently have the same risk graph as the covered call, which is considered an extremely conservative strategy.

Let's say the stock market has a 15% correction. Nobody knows when the correction is going to end and buying the SPY ETF at any point during the correction is like trying to catch a falling knife. So assuming you see value in the stock market, instead of buying a couple of hundred shares right now, you can short 2 put options on the SPY with a strike price about 5% below the current price and 20 days away. You can keep doing this month after month until you finally get assigned the 200 shares of SPY. So you bought lower and got paid for waiting until it got lower.

Obviously, if the stock crashes big after you sold the puts, then this strategy will be catastrophic. BUT, it will be less catastrophic than if you had bought the 200 shares outright or averaged down without a stop (which a lot of "risk-averse" people like to do). One way to mitigate this unlimited risk is to not let the strategy get out of control and buy back the short puts as soon as they go in-the-money for example. Option prices can move very fast, so even though shorting puts is a simple strategy, you have to watch your position very carefully.

Well, I would say this: Shorting options is like picking pennies from a hot manhole. You may get lucky once, twice, xx times but one day you'll get burned and the recurring reward may not cover the recovery expences. So, the short answer is - The benefit from shorting options is very risky. This is based on my backtesting experience using oscreener tool.

Hope this helps in your research.

Most funds/houses with sales businesses ( including IBs ) usually sell structured exotic options to their clients and as a result are left with numerous "Short" uncovered positions.

Since they'd not be able to find buyers for these all short positions , what they do is delta hedge them in their books.

As far as retail investor is concerned , he/she might anticipate very less or no volatility in the concerned underlying , hence would be incentivized to short OTM options.

Briefly saying, that's how it works !

Sometimes those limited risk position are too expensive and will only profit under extreme conditions. On average, you should always add short gamma to your position.

Not the answer you're looking for? Browse other questions tagged options option-strategies derivatives or ask your own question.