I am reading Table II on page 28 in Bali et al. (2007), Value at Risk and the Cross-Section of Hedge Fund Returns: 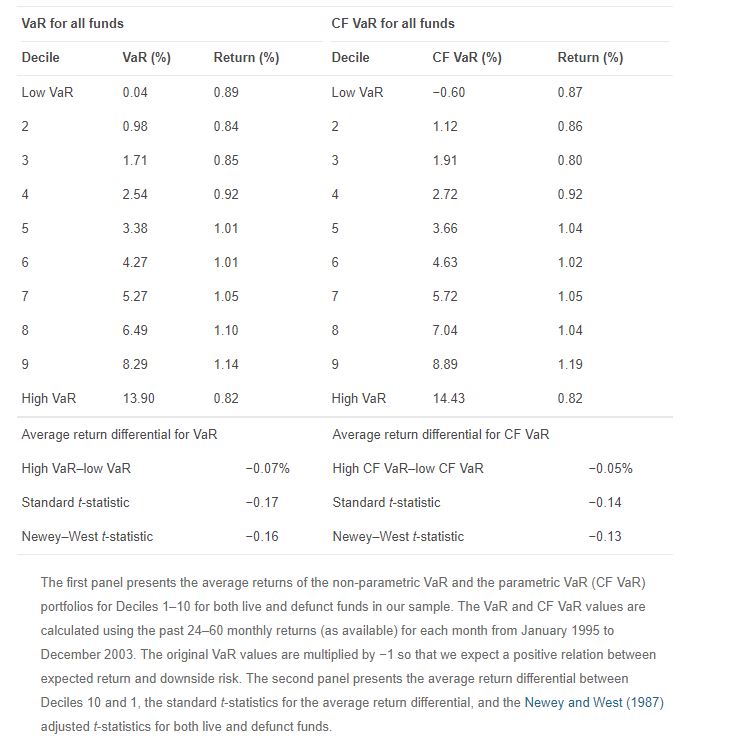 Please can anyone explain the calculation of t-statistic and Newey West t-statistic in the following table? I am bit confused how they calculate the standard deviation of the average return differential.

The standard t-statistic is applied with $H_0:\bar{VaR}=0$ and $H_0:\bar{CF-VaR}=0$. The standard deviation of both your variables is derived from their time-series movement from Jan. 1995 to Dec. 2003. With values of -0.17 and -0.14, $VaR$ and $CF-VaR$ are statistically not significant different from zero. Newey-West t-statistic corrects both estimations for heteroskedasticity and autocorrelation within the time-series of your variables.

For further details, you may look at this excellent answer on Newey-West and read standard econometric books like Murray or Brooks.

If you regress Y against X, you will obviously get a beta co-efficient; and a standard error of said beta coefficient. The traditional t-stat is the former divided by the latter. This ratio forms the basis of many classic, traditional statistical hypothesis tests. In large samples, you can think of it like a normal "z-score". At -0.12, I would expect to see results lower than this if there was NO relationship between VaR and returns 48% of the time, or results more extreme (either way) 96% of the time. I'm not going to think much of the significance of the relationship. Give me a T-stat of >2, however, and the chance of seeing this happen randomly if there was no relationship would become 2.5%/5% respectively.

The problem here is that hedge fund returns have no stable volatility to give a stable standard error to divide the mean of the returns by. The fund alters its risk profile significantly from one month to another; so there's no natural level of risk against which to measure the returns.

In the jargon, they are "heteroskedastic"; and prone to "autocorrelation" (if the fund is following non-linear strategies subject to market regimes that generate payoffs correlated to prior months). In either case, the regression's standard errors, used to compute the T-stats, become invalid. Inferences based on these also become suspect.

Newey-West (aka "HAC") is a workaround for these problems. Essentially, the returns are adjusted to render their volatility and relationship to prior months random (rather than static over time). This lowers your confidence in any relationship to guarantee that any apparent relationship isn't a spurious consequence of heteroskedasticity or autocorrelation. But it makes any such conclusions "safer" if they still occur after the workaround.

Not the answer you're looking for? Browse other questions tagged statistics econometrics statistical-significance or ask your own question.