How do we know if the volatility which is quoted in market is Normal (Bachelier model) or log normal (Black 76)?

So you cant say that it is always log normal because market instruments are in log normal world. Think of Sweden that has negative interest rates now. As we know, negative rates can not be in log-normal world.

Options on interest rates futures in the listed markets are always traded 1-yield (100-yield) just like the futures which are traded 1-yield. So negative rates aren't an issue and its always black volatility.

In the OTC market, both normal and black volatility are quoted, but the common practice is to use black volatility is what is way more frequently used. In the case of negative interest rates, as of right now, there aren't any liquid markets or quotes (normal or black volatility doesn't matter), mostly because negative rates is a recent 2015 phenomena.

However, as the previous answer said, you can definitely get custom quotes from some experimenting dealers who can use some pricing formula off a SABR model or some other variation (but you can bet that dealer will give you horrible off-the-market quotes with wide bid/ask due to absence of a market). 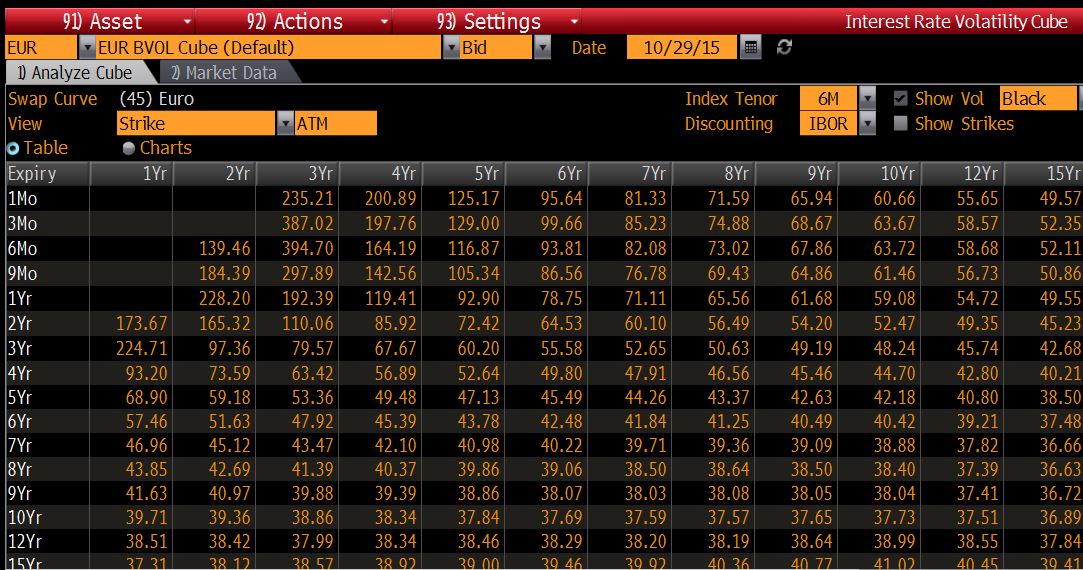 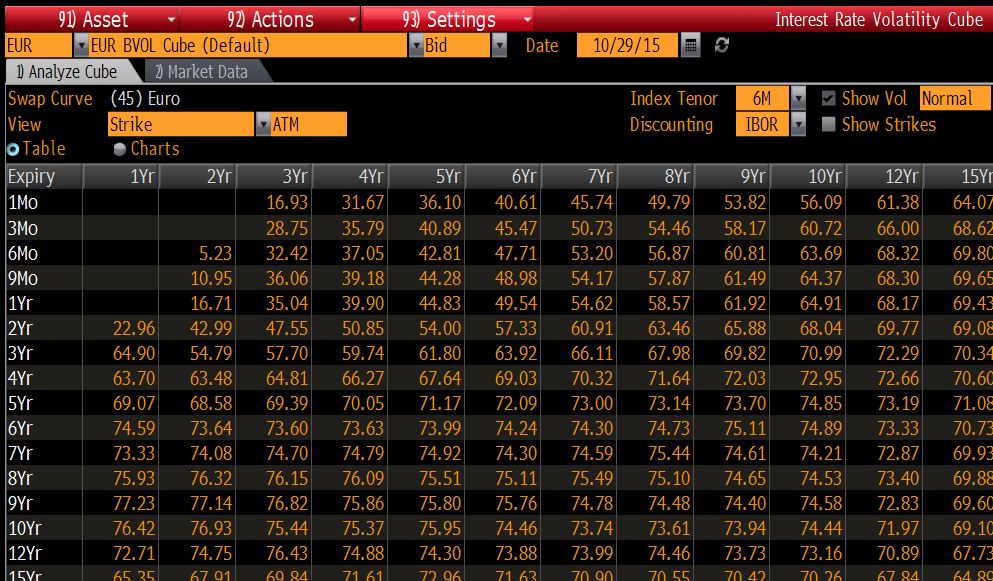 When negative interest rates are not an issue, the full surface options quotes are available, e.g. in the US: 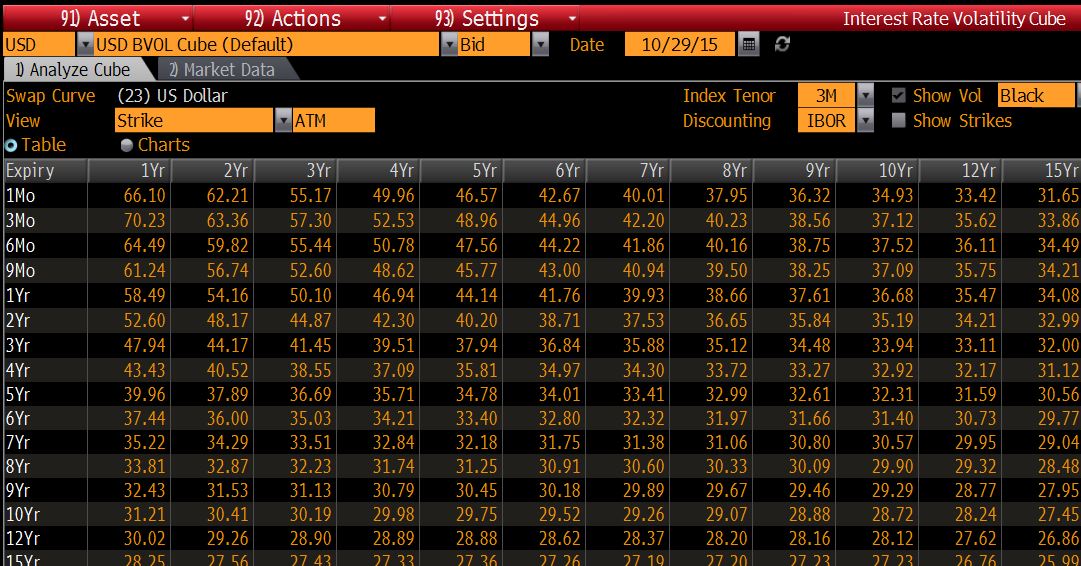 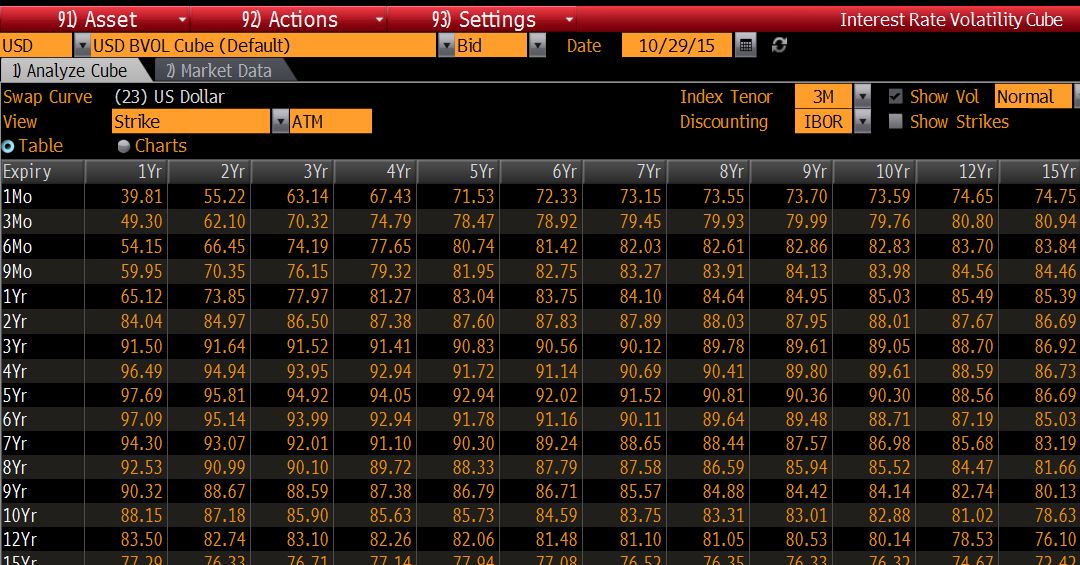 Price should always match. It is up to the dealers on how they want to hedge it ---- and by and large, the futures (which is a way more liquid market) is used to hedge OTC options.

It would not uncommon to use PCA models (and calculate a beta of the yields to the PCA models) to figure out the right hedge (DV01 based) for the futures, rather than using greeks per se.

Interest rate options (swaptions, caps, floors, spread options, mid-curves, etc) that are traded over-the-counter (OTC), as well as those listed on the Liffe/CME exchanges, have been quoted using Normal volatility (basis points, annualised) for quite some time for several reasons, not least of which is the lack of a real zero-bound in yields that you mentioned, as we've seen in Switzerland, Sweden, etc. Bond options (cash bond options, as well as sometimes those listed on Eurex) have historically used Lognormal vol, as have Equities and Commodities. I can tell you though that the big desks that make markets in Bond volatility think in terms of Normal vol as well because they are often traded/hedged with instruments on the swap curve.

It's not strictly correct to say "it should not matter which model we use, we should always get the same price", which is of course related to why your greeks can be entirely different in various models. That is, you can't calibrate a model to the price of a negative yield receiver swaption (for instance) when that model (e.g. Lognormal) does not allow for negative yields. If you tried to do so, your model would "blow up." In Europe this year as forward rates on the long end of the curve decreased significantly, 10 year expiry swaptions to receive 0% fixed for 10 years traded around 0.50% running, and some banks didn't have models which allowed for this type of pricing and therefore, as you suggested, were running the wrong hedges. When they adjusted their models, they had to take large write-downs and adjust their hedges accordingly.

In practice in interest rates, dealers use some variation of the SABR model which allows for varying behaviour between strictly Lognormal and strictly normal via tweaking the model Backbone/Blend, sometimes in combination with a "shifted zero" which is really just an arithmetic hack for what 0% means in the model. This is because different parts of the interest rate curve tend to behave slightly differently.

Generally speaking though the quotes you're looking at should be easy to put in context and identify -- rarely would you find the annualised volatility of interest rates (maybe 50-100bpv) to be numerically close to that of a stock (maybe 15-30%), for instance.

3
How to use volatility to assess the accuracy of a stock market model?
0
Black model - volatility estimation
3
Volatility considerations with interest rate derivatives
1
How does the Black Scholes Model Incorporate Log Prices Into Model?
1
How to Understand Lognormal Distribution in the Following Case
3
Stock Prices are Lognormal - Formal Definition
5
Hedging vega risk with varswaps
2
Using converted lognormal volatilities for negative rates in a lognormal Libor Market Model (LMM)